Match-ups with both NM State and New Mexico, traveling to compete in a pair of prestigious tournaments in non-conference play for the first time since 2009-10 and a compelling 18-game Conference USA slate highlight the 2016-17 schedule for the UTEP women's basketball team, as announced by head coach Keitha Adams Thursday.

"We're excited to release our schedule for the 2016-17 season," Adams said. "We've put together a challenging high caliber non-conference schedule which will help prepare us for our very competitive league."

The Miners will spend the week of Thanksgiving in the U.S. Virgin Islands to play in the 2016 Paradise Jam. UTEP will have three match-ups in as many days against power conference programs, locking up with LSU (11/24), NC State (11/25) and Kansas State (11/26).

UTEP returns to the Don Haskins Center, where the Miners were 19-1 at last year, to lock up with Houston Baptist (11/30). Rivalry week takes center stage after finals exams, with a road game at New Mexico (12/11) followed by the Haskins Center serving as the site for the FirstLight Federal Credit Union Battle of I-10 with NM State (12/15).

The inaugural Patrick Harrington Tournament will take place from Dec. 19-20, with the Alabama, McNeese State, Pittsburgh and UTEP comprising the field. UTEP will be off for Christmas before wrapping up non-conference action with a weekday matinee special against Cal-State Bakersfield (12/28).

UTEP concludes the regular season by playing at Old Dominion (3/2) and at Charlotte (3/4) before turning its attention toward the 2017 C-USA Championships (3/8-11). For the third straight year, the league's pinnacle event will be held in Birmingham, Ala., with UAB serving as host. 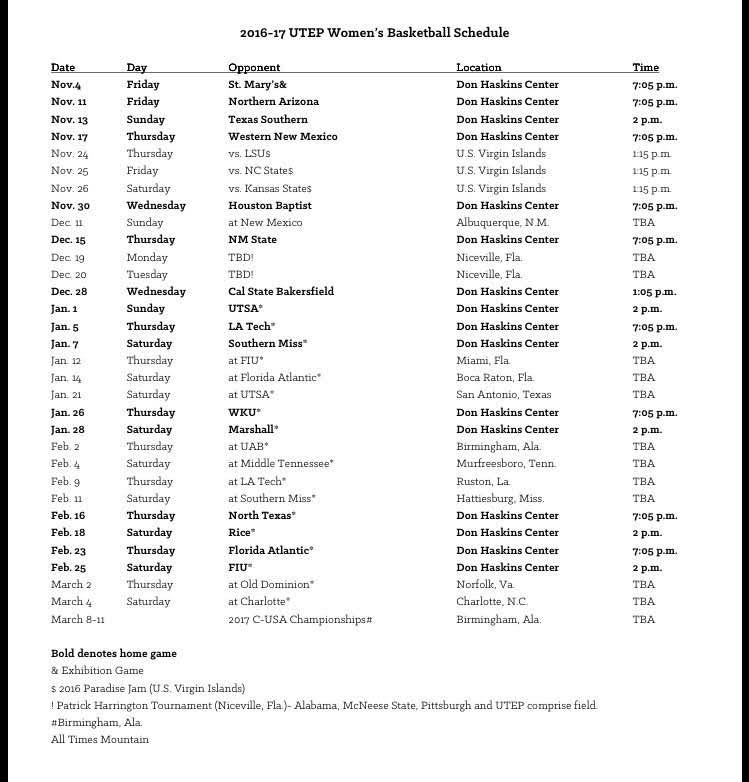