UTEP, Wake Forest will meet in Charleston Classic Opening Round

Share All sharing options for: UTEP, Wake Forest will meet in Charleston Classic Opening Round

The UTEP men's basketball team will face Wake Forest and head coach Danny Manning in opening round action of the Gildan Charleston Classic on Thursday, Nov. 17 in Charleston, S.C.

Other first-round matchups are defending national champion Villanova versus Western Michigan at 11:30 a.m. Eastern, Mississippi State versus UCF at 5 Eastern, and Boise State versus Charleston at 7 Eastern.

The Miners are on the same side of the bracket as Villanova and Western Michigan. UTEP will play a total of three games in the tournament, including on Nov. 18 and Nov. 20. The championship game is on Nov. 20 at 9:30 p.m. Eastern time (ESPN2).

UTEP and Wake Forest have met twice previously with the series tied 1-1. The Miners beat the Demon Deacons, 90-75, in the Sun Carnival Classic Tournament on Dec. 28, 1984 in El Paso. Wake Forest topped UTEP, 82-79, in the 76 Classic at Anaheim on Nov. 28, 2008. The 19th-ranked Demon Deacons were led by current Indiana Pacer Jeff Teague, who scored 29 points, while Stefon Jackson tallied 31 points for the Miners. 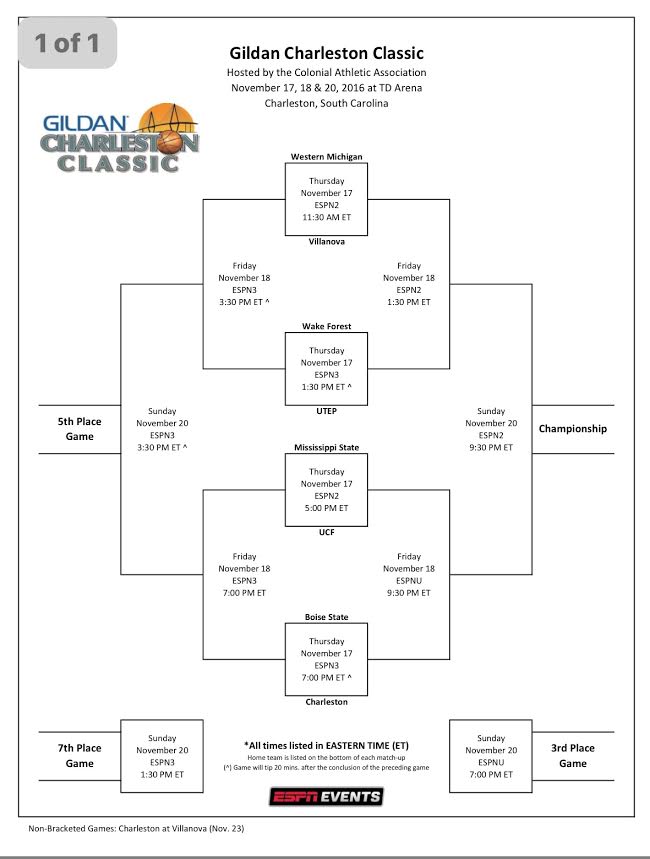