The what, and who to watch guide for the big week in Birmingham.

The Blazers impressively set a school record for blocked shots in a season, and boast the experience at guard to run right through everyone this week.

6'9 do-it-all forward William Lee is the Blockingham Trend Setter ranking fourth in the nation in blocks, while the rock of the Blazers on offense is point guard and well known sharp shooter Nick Norton who ranks in the top-30 in the nation in assist-to-turnover ratio.

Their deep, they have P5 size, and when both Dirk Williams, and Robert Brown are scoring from the wing, they flirt with the top-25 team label.

Home cooking is always nice, but it will be the Blazer's intangibles, and proven depth that could carry them to another net cutting down performance in 2016.

They maybe "limping" into the tournament by not having the services of Giddy Potts, but the Raiders can defend, take care of the ball, and stroke the 3-ball which makes them a legit contender.

Their defensive numbers have slid in the latter part of the season, but they rank inside the top-30 in the nation in 3-point field goal percentage.

The trio of Reggie Upshaw, Darnell Harris, and Perrin Buford legitimized themselves last year in Birmingham, but the question now is who steps up in the backcourt for another C-USA tourney run.

Edward Simpson had real nice games against Southern Miss, and Old Dominion, and will be needed along with veteran guard Jaqawn Raymond.

Kermit Davis always his team mentally prepared, and his defensive schemes make it tough to score in stretches.

From a dark horse to a legit contender in a full calendar year, this core of Buford, Harris, and Upshaw have Middle Tennessee in the upper echelon of C-USA hoops.

Alex Hamilton might have sealed up the Conference USA Player of the Year award with this triple-double, and back-to-back 30-point outputs to end out the regular season.

It also shows the senior guard may have more tricks up his sleeve this week.

He scored 33 points in the season finale loss to WKU on Saturday, but the Dawgs still have the talent to make a run.

Erik McCree's health and production is a key for LA Tech, his eight double-doubles on the season proves how much his Robin means to Hamilton's Batman role.

Dayon Griffin's 3-point shooting, and Jacobi Boykins', length, and ability to score inside-and-out are also reasons the Dunkin' Dawgs have a real shot at knocking off UAB.

Another important element is Derric Jean's steady guard play, and we're not just talking about his half-court shot making magic.

He provides steady play at the point when Eric Konkol uses different match up lineups and also Jean has scored in double figures 12 times coming off the bench.

Keeping big men Merrill Holden, and Jy'lan Washington out of foul trouble will be another LA Tech key, as both provide rim protection, and presence in the front court.

LA Tech fans have long awaited a championship run in a conference tournament, can Hamilton deliver?

Coaches always talk about guard play being a key component for success in March, and Mark Price has four guards who have the ability to make March Magic.

Scary thing about the 49ers is Braxton Ogbueze, Curran Scott, Andrien White, and Jon Davis all return next year as proven production pieces to build around.

Problem for the 49ers perception is they lost to each of the top-four seeds during conference play, but played those teams down to the wire other than a blowout loss to Marshall.

Guard play could be a major theme this week, and Charlotte could be a factor in that type of story line.

The Tops have turned it on per say, winning four out of their last six to end the regular season after dropping three in a row including back-to-back overtime games, and 3-point loss in a defensive slug fest with Old Dominion.

Closing games out has been an issue, but Ray Harper has fine tuned the defense in where the Tops are the only team besides LA Tech to beat both Middle Tennessee and UAB via stellar defense.

6'4 electric guard Fredrick Edmond has developed into a reliable scoring option by reaching double figures in 12 of his last 13 games, and has also averaged 7.6 rebounds per game in the same stretch.

Every team who makes a run has a special player, and Aaron Cosby could become WKU's guy this week.

He's knocked down 16 three pointers in the past four games, and scored 34 points in the overtime win against LA Tech to close out the regular season.

If the conference handed out a most improved player award, 6'7 Justin Johnson is the head-and-shoulders winner.

The Tops also have legit rim protecting size with 7'1 Ben Lawson, and 6'10 Latvian Aleksej Rostov making them a matchup threat.

Conference USA's soon to be named Freshman of the Year sits third among the all-time freshman scoring leaders in C-USA history, making the Owls a team not to forget about.

Evans has been putting up some head turning numbers, and percentages since mid-February.  IF Rice can get past Charlotte, big games and performances from Evans are musts.

Had to mention UTEP right?

When Earvin Morris, Omega Harris, Lee Moore, and Dominic Artis are sharing, and scoring, UTEP is dangerous on a neutral floor.

But can the Miners gets stops, protect a lead, and score against a team like Middle Tennessee in a semifinal setting are the Miners C-USA Tournament questions.

ODU might have the best defensive team, and scheme in the league, and will have C-USA's best offensive playmaker on their side.  Freeman v. Hamilton in the C-USA quarterfinals could be an instant classic.

It's a proven C-USA fact that you have to score 80-points or more to beat Marshall, unless you're Old Dominion.

Everyone can shoot, and seems like everyone can get to the rim, but can the Herd play enough defense for a run to Saturday?

Kelly is going make a nice living playing basketball for the rest of his talented life.

See his season stats for analysis.

Hamilton has turned it on as of late, and is a determined senior leader.

C-USA's best pro prospect could cement his stock with a solid showing this week.

UTEP's go to guy in the clutch, a quiet leader who thrives on the big stage, and is worth the price of admission. 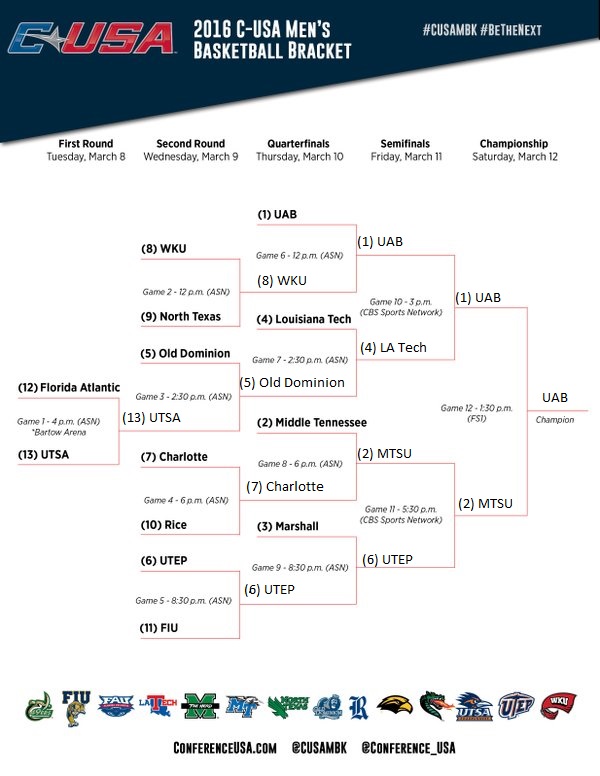