A few changes here and there, but for another week some continuity dots the depth chart.

Darrin Laufasa is listed as the starting fullback on this week's depth chart indicating he is questionable for this week's game after suffering an injury on Saturday, but Sean Kugler would not give any details Monday making him a game time decision this week.

After a solid performance in his first extended action of the season, JUCO transfer Sky Logan is now listed as UTEP's starting defensive tackle.  Logan had three tackles and a sack against Incarnate Word last week.

For the first time during the season, UTEP now lists a three deep rotation at defensive tackle, and nose tackle.

The only other noticeable change is tight end Sterling Napier listed as the third fullback.  Kugler noted that UTEP is shorthanded in the backfield, so it appears Napier will practice there this week.

Daniel Siller is listed as the second X-receiver, replacing Donovan Walker who has quit the team according to coach Kugler.

Tailbacks have Jeremiah Laufasa at the top, followed by LaQuintus Dowell and Treyvon Hughes for the second consecutive week.   Kugler indicated that freshman quarterback Kavika Johnson will see some reps at tailback this week.

The secondary also remains unchanged for the second straight week.

UTEP opens C-USA play Saturday with UTSA at 6:00 p.m. in the Sun Bowl. 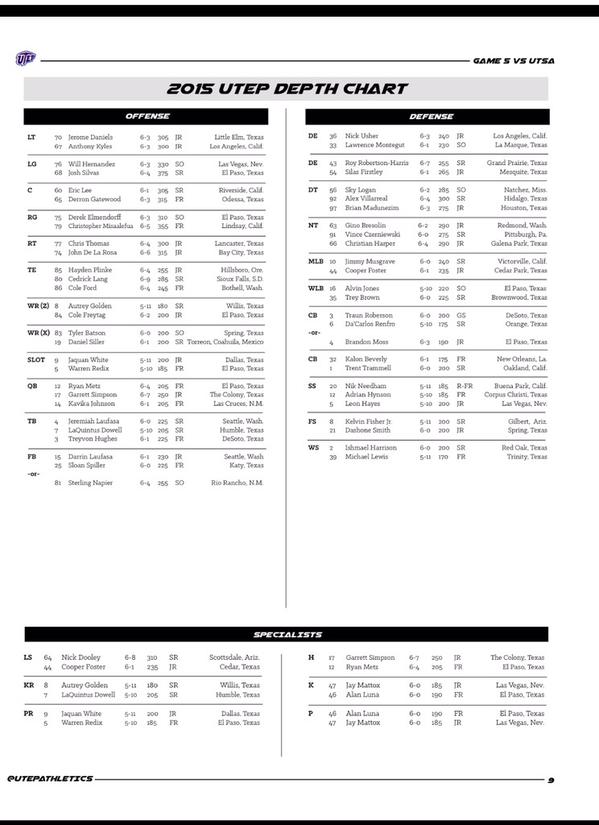