No Aaron Jones, a move for some running back depth to supplement the loss, and Ish Harrison is back?

UTEP released an updated depth chart for Aggie week with a few notable moves dotting the depth chart this week.

First and foremost, Aaron Jones is not listed on the depth chart and has been officially ruled out against NMSU.

Kugler indicated at his weekly press conference that Jones will "be out for an extended period of time", and will wait for tests to see the length and actual injury Jones sustained.

To supplement the loss, starting safety LaQuintus Dowell is now listed as the third tailback and is no longer listed as on the defensive side.

Dowell was converted from running back to safety before last year, and could be an emergency option or actually apart of the carries pitch count this week.  Dowell had a 54-yard TD run against NMSU in 2013.

Jeremiah Laufasa is listed as the starting tailback, with Treyvon Hughes behind him.

While negative injury news about Jones glares right at you when looking at the depth chart, a few needed returns from injury are also showing up on the depth chart.

Ishmael Harrison who was thought to be out for most of the season has been running around in practice according to sources, and is listed on the depth chart as the starting weak safety this week.

Wide receiver and punt returner Terry Juniel is also listed on the depth chart, meaning his doctor appointment last week must have went well for him to be listed on this week's depth chart in hopes of his highly anticipated UTEP debut.

Jaquan White is listed as the first punt returner on the depth chart, assuming UTEP eases in Juniel there as get some game snaps.

Both Harrison and Juniel will be monitored close this week, as both are expected to practice, and be game time decisions according to coach Kugler.

There is a change on the offensive line as Chris Thomas is now listed as the starter at right tackle over John De La Rosa.  De La Rosa is "hobbled" according to Kugler, and Thomas will fill in if De La Rosa is not ready by Saturday.

Backup quarterback lists Garrett Simpson and Ryan Metz and or's, and there is some movement in the secondary, but playing against another pass heavy attack  you can throw out who starts as situational package preference takes over at this spot. 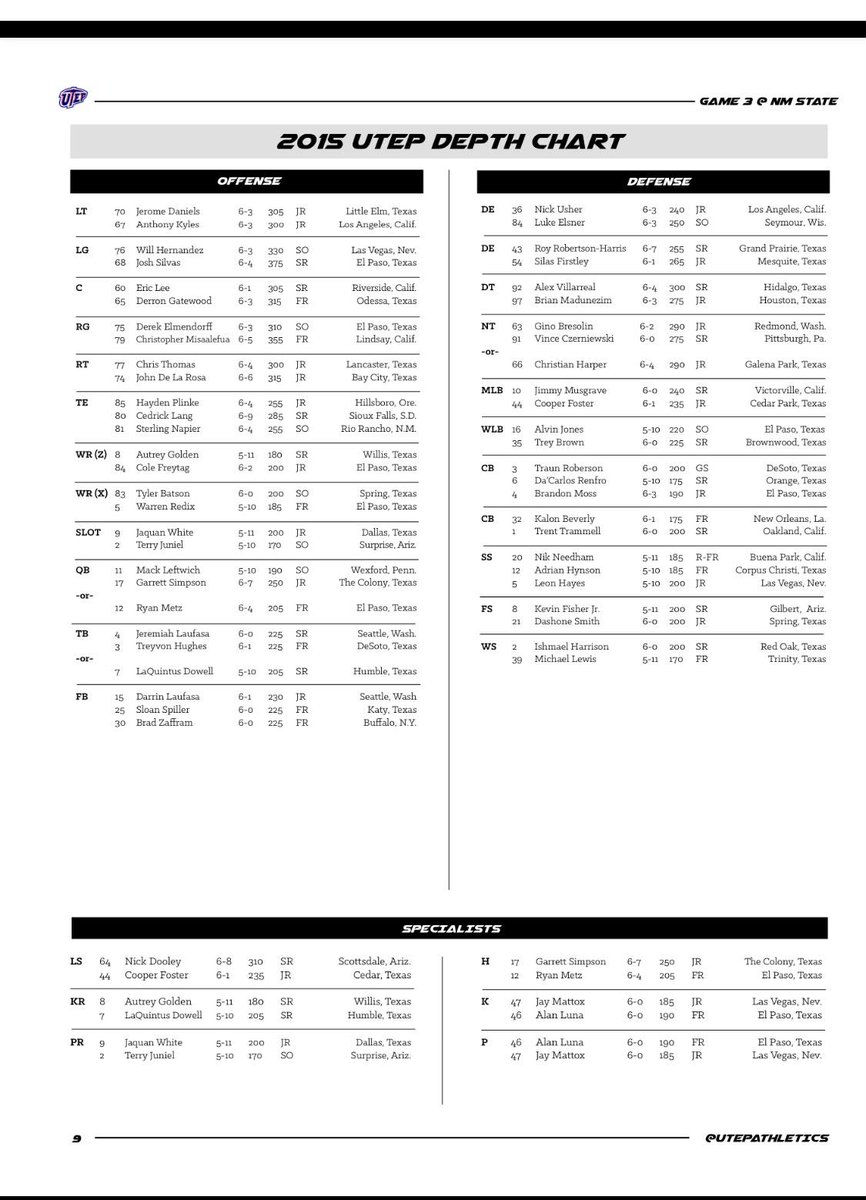