Beyond the Boxscore: Five thoughts

UTEP took a whooping again in week two, here are some thoughts on the Miners loss.

Share All sharing options for: Beyond the Boxscore: Five thoughts

After a five hour drive, plenty of thoughts came to mind, but here are five and a positive bonus.

Look if Aaron Jones had all 77 touches on offense yesterday, the game is a lot closer, but yeah...you can only get away with that in NCAA14.

UTEP only had one efficient play calling drive which ended in Jones' 24-yard TD reception.

AJ had eight touches for 55 yards on that 12 play drive, but the biggest play was a 20-yard reception by Darrin Laufasa which really got UTEP going, and showed UTEP can spread the ball around when Jones is doing his thing.

The coaching staff vowed to get more creative and use multiple guys in camp, but opposing defensive staffs have two years of stale play calling to prepare for spots in where Jones gets the ball which has not changed one bit.

I like the unbalanced line, and the personnel manning it, but when there is already seven or eight in the box, why not open things up with Warren Redix, Jaquan White, or Autrey Golden running quick slants, screens, reverses?

UTEP just has to do a better job of mixing or disguising their power runs, which are effective, but are also pretty obvious when they are coming, and of course, easy to stop when you just crash gaps on defense.

Jones needed help, and the coaching staff did not help at all.

The most atrocious playing calling segment was in the final drive of the first half.

Tech was ready for Jones to be slammed up the gut, and the result, he got hurt.

UTEP's third down play call was even worse then first and second down, giving Tech the ball back for Mahomes to put this one away at halftime.  All UTEP needed was a first down to go into the half down two scores with the kick coming their way to open the third, but that crap happened.

I get not showing your hand before conference play, but its not that UTEP doesn't have offensive talent or depth at the skill positions, we're just not seeing the playbook opened up much in the first two weeks.

QB draws for Leftwich on third and longer than five with three or four WR's are perfect examples.

If the Miners want to compete in C-USA West, that has to change in the next couple of weeks in my opinion.

So where does the offense go if Jones is out for an extended period?

Right now the severity of Jones' ankle is unknown, and sources say its a high ankle sprain.

So where does the offense go as it appears Jones could miss some time?

Does that playbook have to open up?  Does UTEP make a change at QB?

Kugler said after the game the staff would have to come together to sort out their options before a change is put into motion, to me meaning they will consider some options.

Seems like its an out route, RB check down, naked boot, or hitch is called for Leftwich's passing plays so far in the first two weeks.

That works when Jones is able to turn simple dives, slams, and counters into big gains, but without Jones the Miners will need more diversity in the passing game.

Leftwich was actually pretty decent Saturday and in week one, he did have a few passes tipped as expected, but threw for career high 141 yards on Saturday.

Could he become even more effective with more WR's running a variety of different routes instead of basic middle school play calling?

I think he can, and if Jones is out, Leftwich should be opened up since he has proved he can be an effective quarterback or a major change needs to be made before things get out of hand without #29.

Hayden Plinke is a baller

Plinke had four catches for 87-yards and should become way more involved in UTEP's passing game after back-to-back solid showings to open the season.

The 87-yards are the most receiving yards for a UTEP tight end under Kugler.

He has the ability to separate with speed or physicality, and probably has the best hands on the team behind Aaron Jones.

Plinke can put up all conference numbers if his number is called consistently, and will also need to become another weapon UTEP desperately needs with or without Aaron Jones.

We thought it could be a strength, but UTEP's young secondary is struggling with a number of things.

Texas Tech had a time of possession of just 19:45 compared to UTEP's total TOP of 40:15, and put up 69 points while averaging just over nine yards per play.

That's all you really need to know about UTEP's current defensive struggles.

The Miners are struggling with tackling technique in open space, and UTEP's front four has not been consistent enough against the two best offensive lines they will see all year in back-to-back games.

Silas Firstley, and Roy Robertson-Harris both had pretty strong games behind the Saturday onslaught, but UTEP needs more consistent efforts from a number of guys in the front six.

Consistency should come with experience when it comes to the secondary, but how quick can this defense put things back together in making teams earn their points instead of allowing big play, after big play.

Its still early, and UTEP is done with the most daunting part of the 2015 schedule.

But the issues UTEP has right now are pretty alarming for a team with pieces to compete right now.

For a positive note specials team play was greatly improved on Saturday with the exception of kickoff return.

Back-to-back wins in the next two weeks would do wonders for the confidence of this team, and more particularly the defense.

Just like last year its going to be about how UTEP responds after playing some bad, confidence demoralizing football.

The NMSU game is no longer an automatic win IMO.

The Miners have to come out with a chip on their shoulder all week in practice, and next Saturday to avoid the panic button from being activated.

Finally we get an orange top to fill out an all orange look again.

Not a fan of tw- tone numbers, but the orange really popped in the sun making the two-tone almost non existent, and retro stripes on the pants are also pretty damn cool. 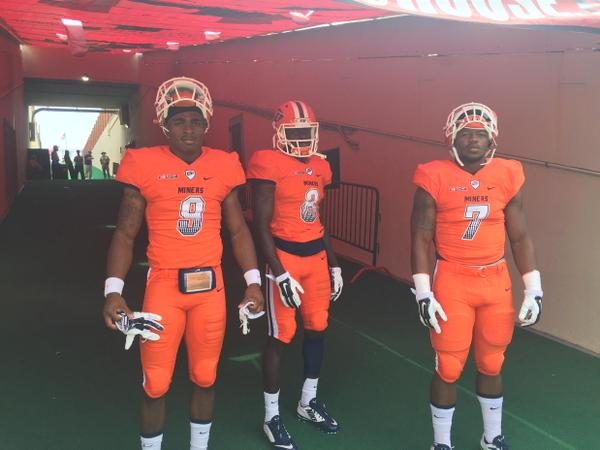 Good to see a new combo, lets just not wear white at home anymore with addition of these orange bad boys, please.