No major surprises, but it looks like Mack Leftwich is more than likely your starting QB according the released depth chart.

The official announcement is not supposed to happen until later today at Sean Kugler's media luncheon, but UTEP Athletics just released the depth chart for the Arkansas game with Mack Leftwich listed as the number one quarterback. 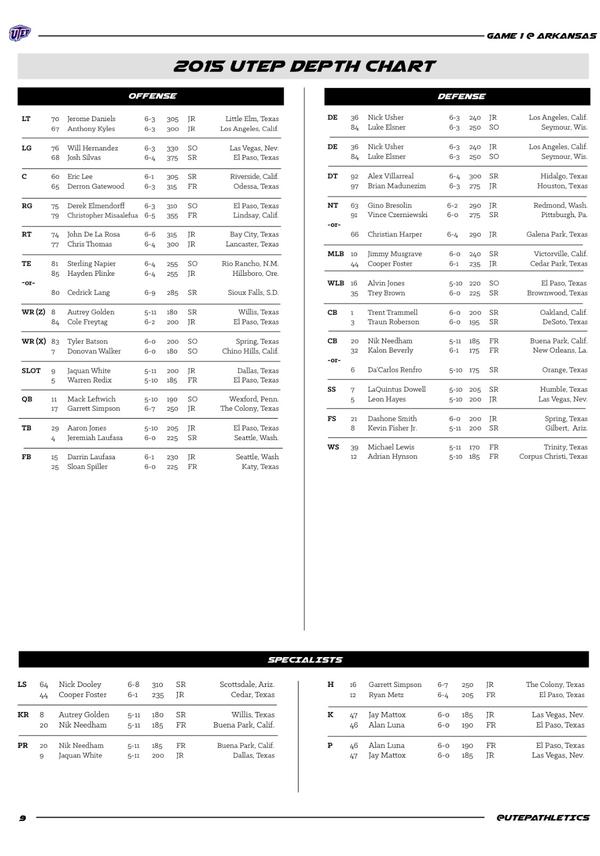 One mistake to clear up to avoid confusion, Nick Usher is listed twice at defensive end, but of course his opposite will be Roy Robertson-Harris.

John De La Rosa will be your starting right tackle, Sterling Napier, and Hayden Plinke will be the top tight ends, Trent Trammell, and freshman Nik Needham will start at corner, and it appears Cooper Foster won the fourth linebacker spot to round out the most heated position battles in camp.

Autrey Golden, and Tyler Batson are listed as the top receivers on the depth chart, and Jeremiah Laufasa is listed as the number two running back, but of course UTEP will use a heavy rotation of guys at both positions.

As far as specialists, Nik Needham will return punts with Jaquan White, Alan Luna will punt, and Garrett Simpson will be the holder to round out the notable spots on the depth chart.