All signs point to a big bounce back year for the Miners in 2015-16, now we get to see who is on the payback tour.

"We are excited to announce the schedule," Adams said. "Last year we went through some challenges but hung in there and battled. We're looking forward to getting back on the court, especially in front of our fans at the Don Haskins Center."

UTEP opens the season with six straight in the Don Haskins Center, including a return of the Fifth-Annual UTEP Thanksgiving Classic followed by a return game from a home-and-home series with New Mexico.

The Classic will feature the Miners alongside Idaho State, Southeast Missouri, and UTEP's opponent on the first day UC Riverside which will start on November 28th. Winners will meet in the championship game the following day, as will the consolation game.

The Miners host New Mexico on Wednesday, December 2nd.   Then head to Las Cruces to face the Aggies on December 5th. UTEP will have a two week break after their Battle of I-10 tilt.

UTEP will also be a part of the Beach Classic hosted by Long Beach State which starts December 19th; opponents for the two day classic will be announced at a later date.

The C-USA slate gets underway with a two game road trip starting with Rice on New Year's Day, and then the Miners travel to Denton to face North Texas on December 3rd.

Key home dates in conference play is the January 7th C-USA home opener when Middle Tennessee comes into the Don.  Other must see games are January 28th vs. Southern Miss., and January 30th when the Miners host LA Tech.

The Miners have plenty of returning pieces, and new faces to rebound in a big way from a 12-16 record last season.  To note, no tip off times have been announced for the 2015-16 season.

Season tickets for the 2015-16 season continue to be available for purchase. Fans may call (915) 747-6150 or e-mail seasontickets@utep.edu to secure theirs today. 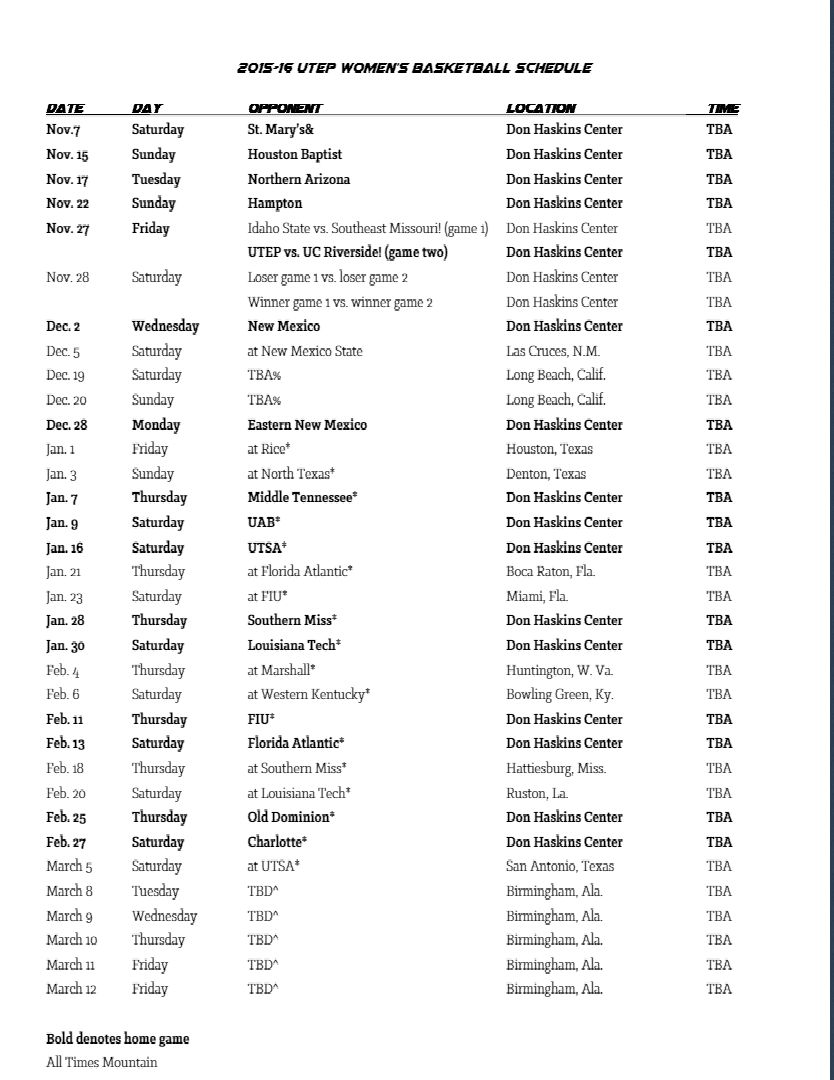