Two more practices left in the spring for Sean Kugler & Co. after today, with the spring game exactly a week away.

All three quarterbacks in the race for the 2015 starting job had promising moments in the final scrimmage of the spring, but it was Garrett Simpson who shined the brightest Friday morning.

Simpson led a long and methodical scoring drive in UTEP's move the ball portion of the scrimmage, capping the 65-yard drive off with a beautifully placed 2 yard touchdown pass to Jaquan White.

"He did a great job, he had some nice thrown balls," Sean Kugler said about Simpson's drive, "Garrett has done a nice job all spring, he's really came a million miles as a player on and off the field, I am really proud of him."

Ryan Metz continues to be the most consistent passer although with the least amount of reps among the three, while Mack Leftwich had his fair share of impressive completions for gains in short passing situations, showing sharp decision making during those completions on Friday.

"I thought they all did a nice job,"  Kugler said of the quarterbacks performance in the scrimmage. "Too many pre-snap penalties but I think those are more so on the interior guys and we gotta get that cleaned up."

Kugler said Ryan Metz can definitely play his way back into the race, but would like to see him on the field even if its not under center.

Metz showed great leadership after a short yardage portion, giving credit and high fives to his lineman after three straight successful conversions, one via roll out where he hit Sloan Spiller in perfect stride for a big gain.

"He can certainly play his way back into it," Kugler said of Metz, "He's going to have a role on our team too, I'm not going to have athletes standing on the sidelines, so if he's not in the quarterback mix, he'll be doing something."

David Hamm has had a tremendous spring, and started off Friday's scrimmage further proving it with a flash bang run.

Hamm gashed the defense for a highlight reel worthy 70 yard touchdown run on the second play of the scrimmage's move the ball period.

Freshman Treyvon Hughes displayed his power and speed versatility in both move the ball, and short yardage portions, showing UTEP has some serious depth behind Aaron Jones with some young runners who all compliment each other very well.

"I was going into the spring looking for that number two," Kugler said of the running back depth, "I was really interested in seeing Hamm and Hughes, and both of those guys have stood out.  Two excellent, quality running backs to add to our mix, I think we will be a solid four deep at that position."

Another guy who stood out and could be a future productive name at running back or fullback was red-shirt freshman Sloan Spiller from Katy.

Spiller had a nice catch out of the backfield in a short yardage situation, and is a sound, physical blocker who can become an automatic short yard down back in his UTEP career.

No Aaron Jones again for obvious reasons of a pitch count.

M.J. McFarland out with a concussion

Missing from Friday's workout, and more than likely the rest of the spring is tight end M.J. McFarland who suffered a concussion and has not practiced since our last spring football update.

"We've been going through the concussion protocols," Kugler said, "Especially in the spring it doesn't make any sense to rush a guy back from something like that.  M.J. was having an outstanding spring and if we can get him back for this last week it would be nice."

Sophomore Donovan Walker expected to red-shirt and not see the field last year when all of a sudden it was pulled during the middle of the season so he could help out a struggling wide receiver corps.

Over the past couple of weeks he has seemingly locked up a starting role this coming season at receiver with a strong showing in the spring.

Hauling in a few big plays in Friday's scrimmage, Walker could be a guy who could become a legit down field route running threat this season.

"I pretty much know what I'm doing," Walker said of the transition from his role last year to his year, "Being comfortable in the offense is the biggest transition, this year felt like it was my time.  I came in with the mindset to do whatever I could to start and just taking advantage of it and not looking back."

Walker was a main target in Friday's scrimmage for the quarterbacks in the rotation, a solid and proven blocker, he is emerging as a major production breakout candidate this season.

Jeremiah Laufasa, Hayden Plinke, Ishmael Harrison, Derek Elmendorff and Autrey Golden all remain out nursing injuries, and will be ready and fully healthy for fall camp.

Defensive end Nick Usher was limited Friday with what Kugler described as a hand injury, but was participating in individual drills with just shoulder pads and shorts.  Usher is expected to be okay and will probably be held back in the final week of spring practice.

UTEP has been fairly healthy this spring despite very physical practices in pads.

New names on the roster

A few new names popped up in practice, and on the roster including a couple of El Paso kids.

Matthew Roberts-Martinez a running back from Franklin High School was practicing with the team, along with linebacker Isaiah Gomez from Americas High, linebacker David Jackson from Parkland High, and defensive lineman Armando Saldana who is from El Paso but went to high school in Germany.

UTEP also added 6'2 sophomore wide receiver Jean Andre-Moore via Cabrillo College, all the new faces are presumed to be walk-ons, all of the El Paso kids are listed as freshman.

Eric Tomlinson was also at practice as were a number high school coaches from across the city including Andress and Franklin.

UTEP will hold their pro-day next Thursday.

Next Friday, April 10th will mark the end of spring ball with the annual spring game at 7:00 p.m. in the Sun Bowl.

Admission is free, posters and free hot dogs for the first 300 fans will be given away, and usually you can meet and get autographs from players after the scrimmage.

With more numbers on the roster in 2015, UTEP has more options for the spring game, but Kugler will keep it simple in a full scrimmage setting for extensive evaluation of depth down the depth chart.

"Well we're not going to have a draft and split teams," Kugler said, "But we are going to have a full scrimmage and we have a few guys banged up so we'll probably hold a few guys out of the spring game, not risking any injuries to some of the established starters, and get a chance to look at a lot of twos, but we'll bang around for a couple of hours." 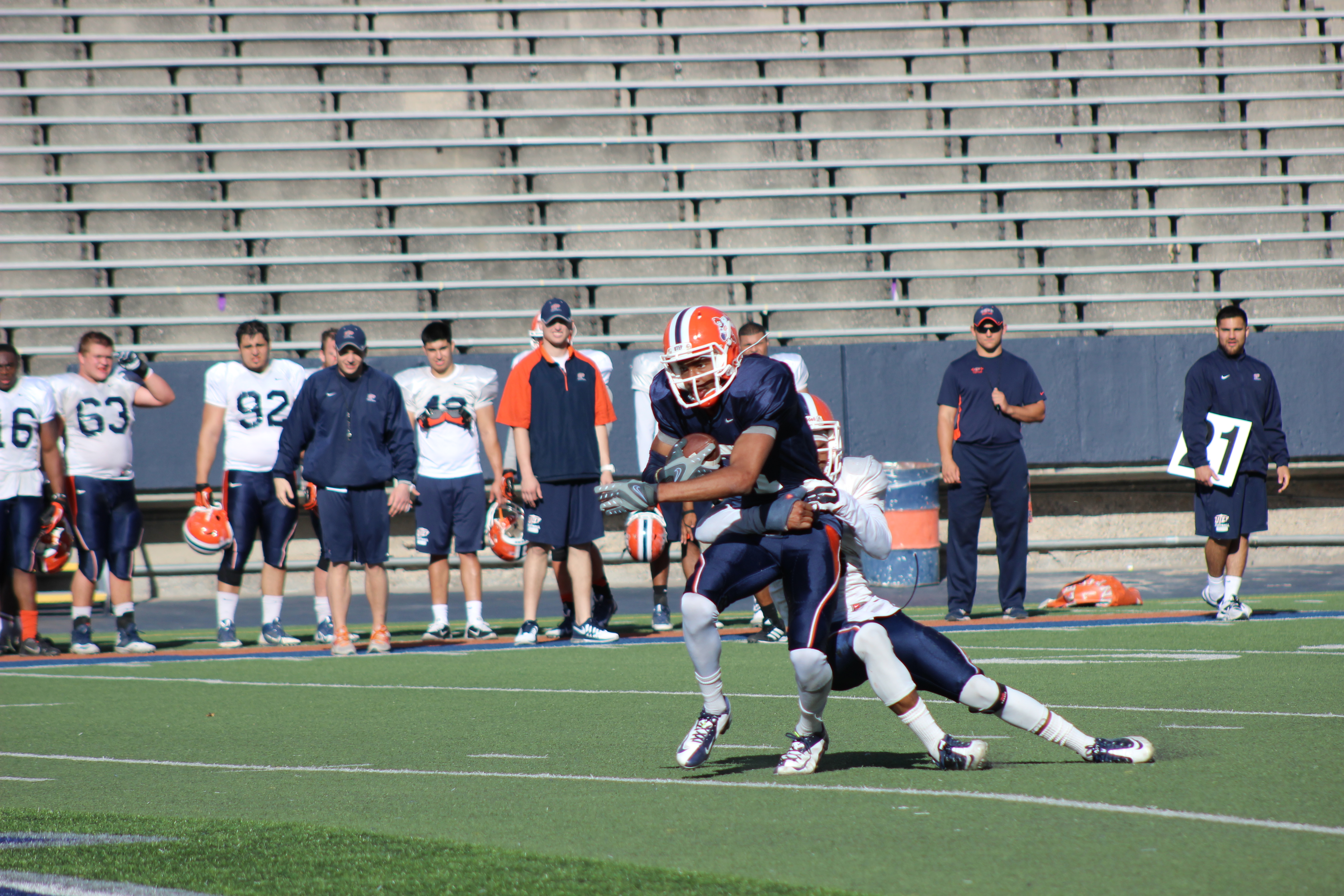 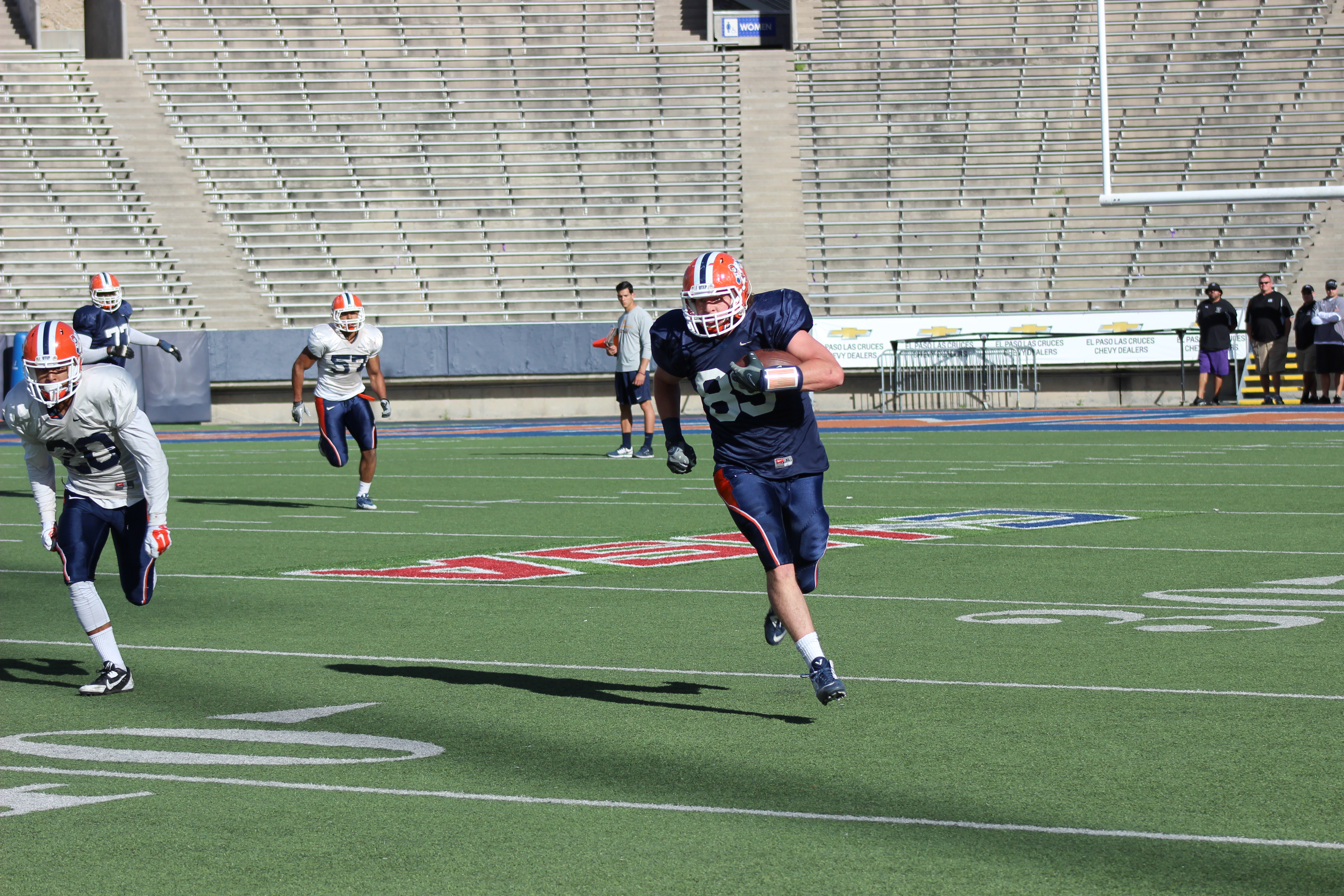 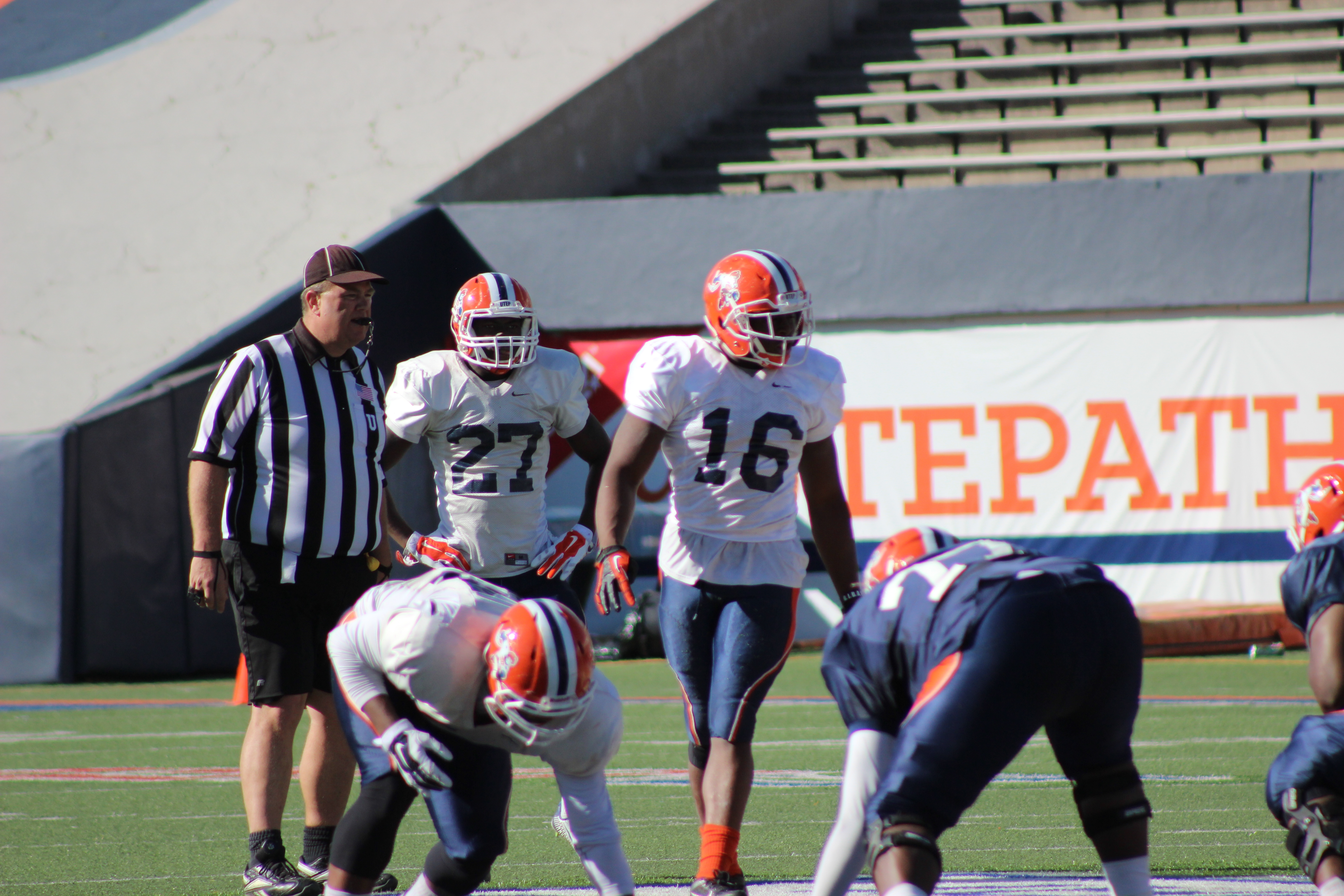 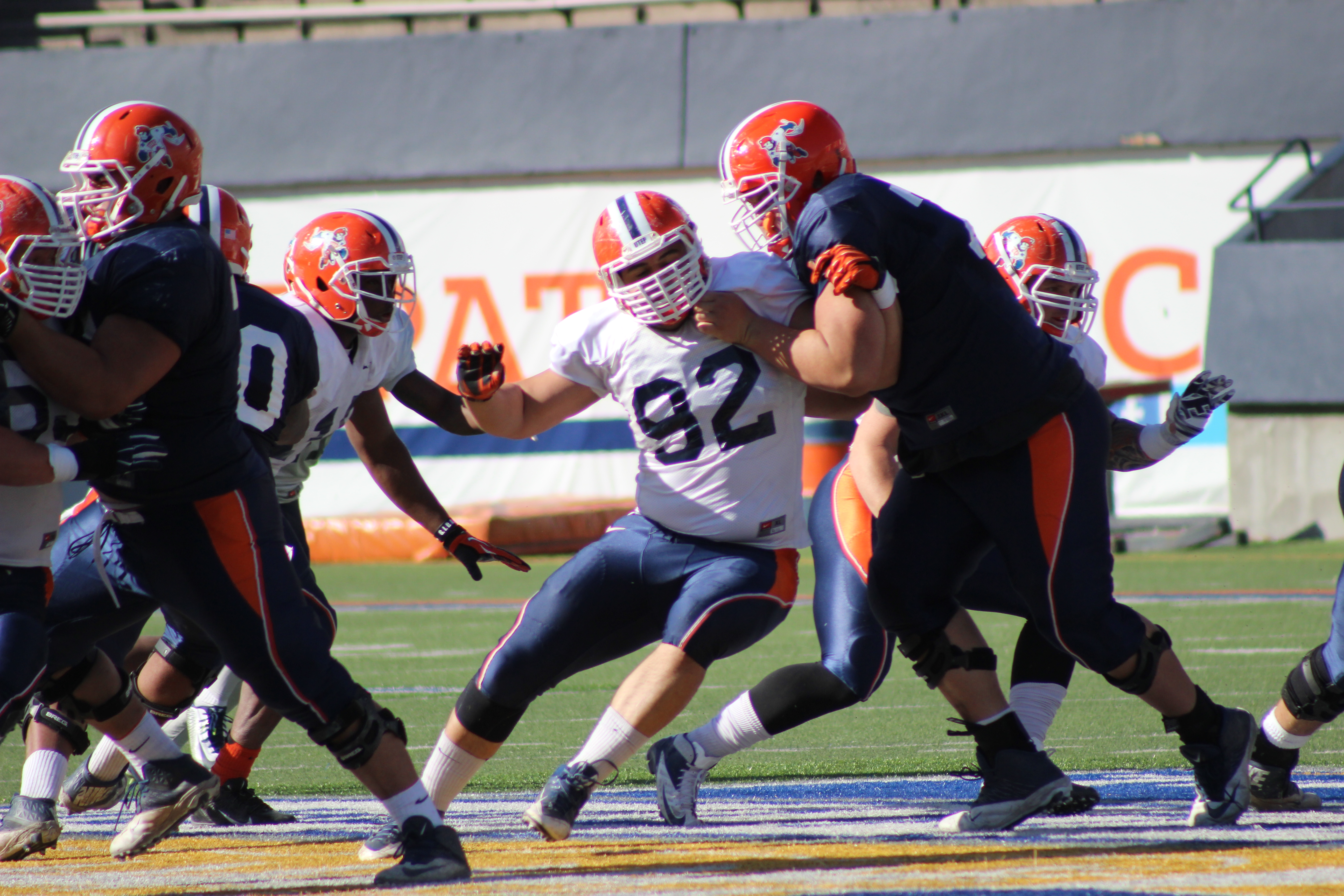 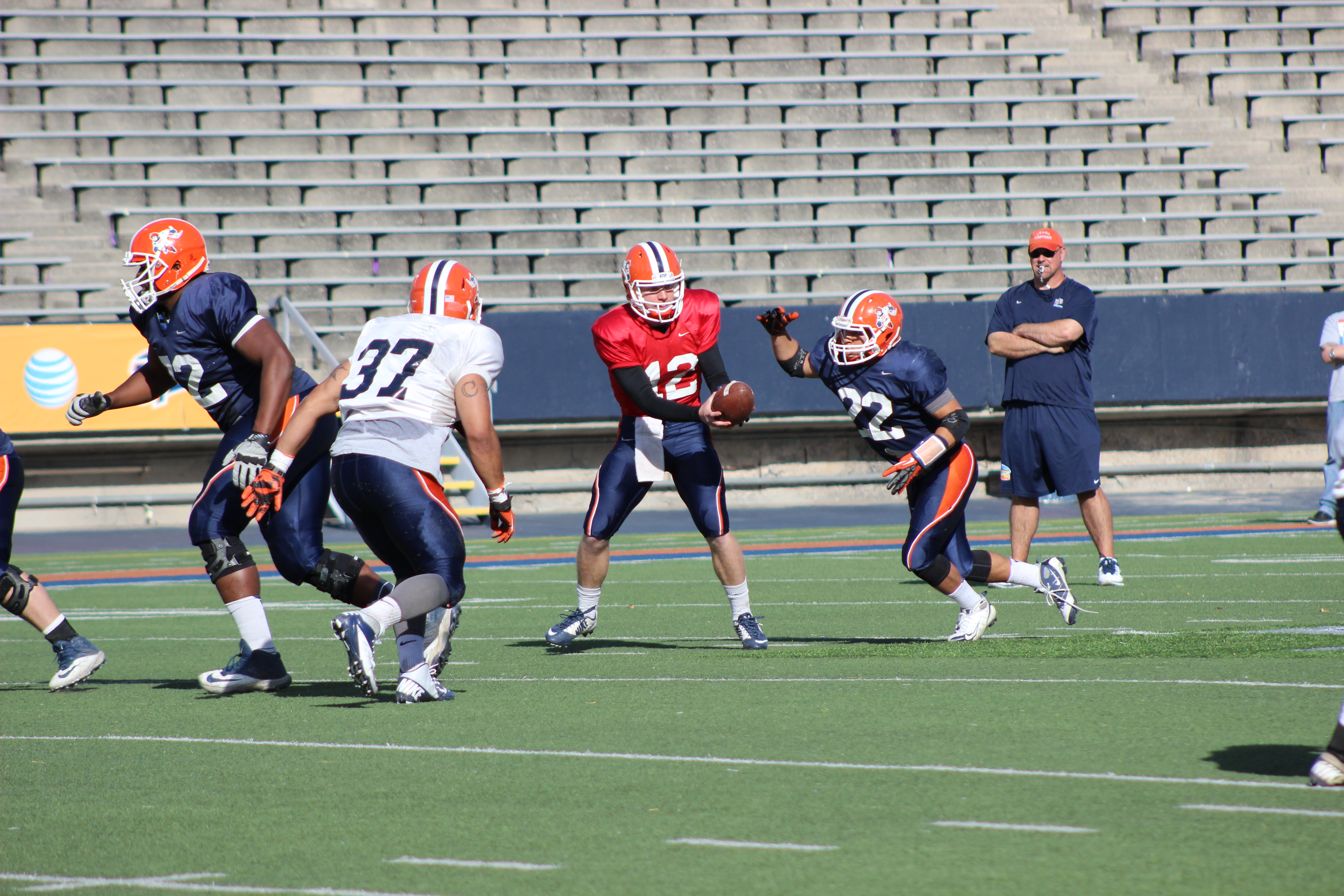 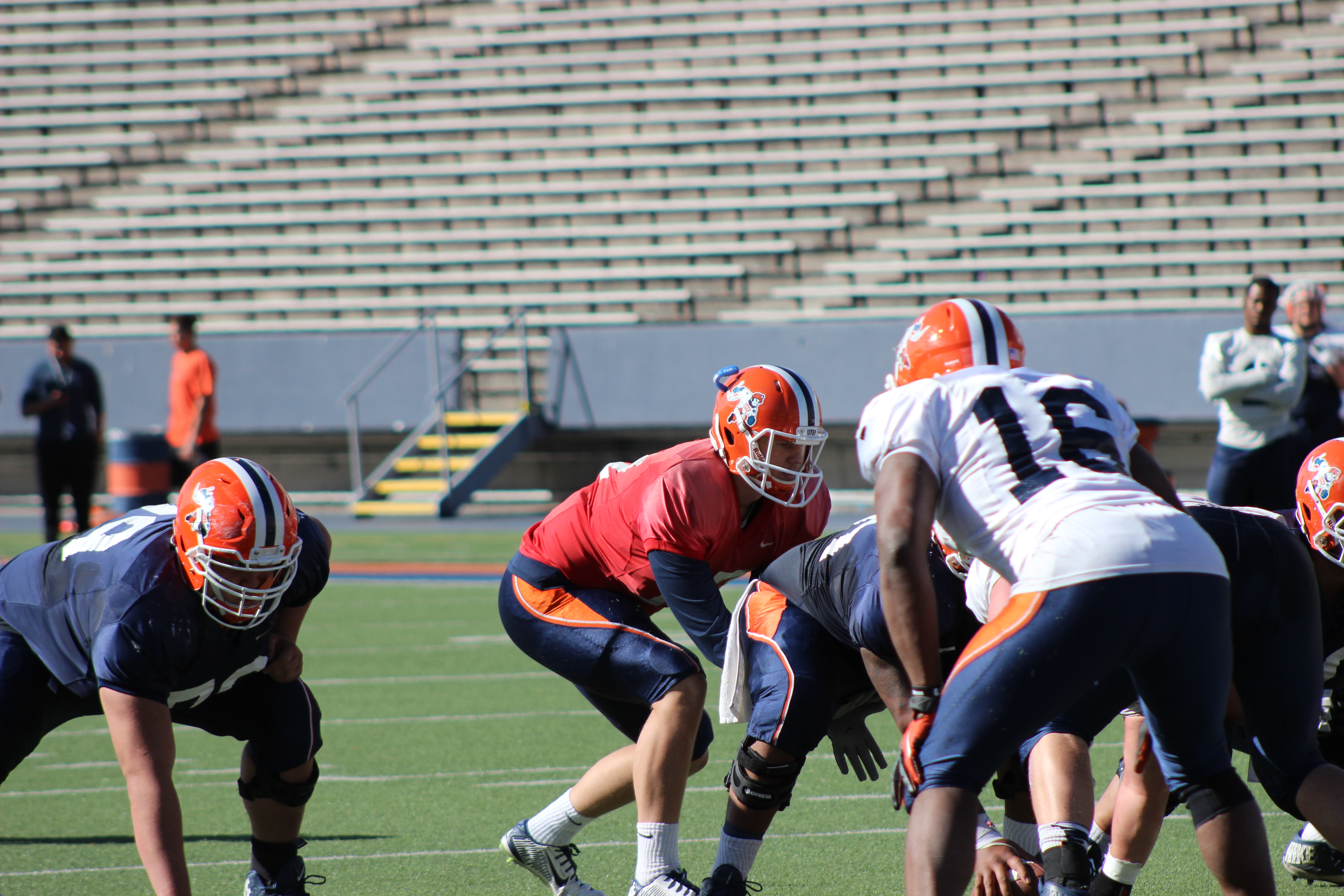 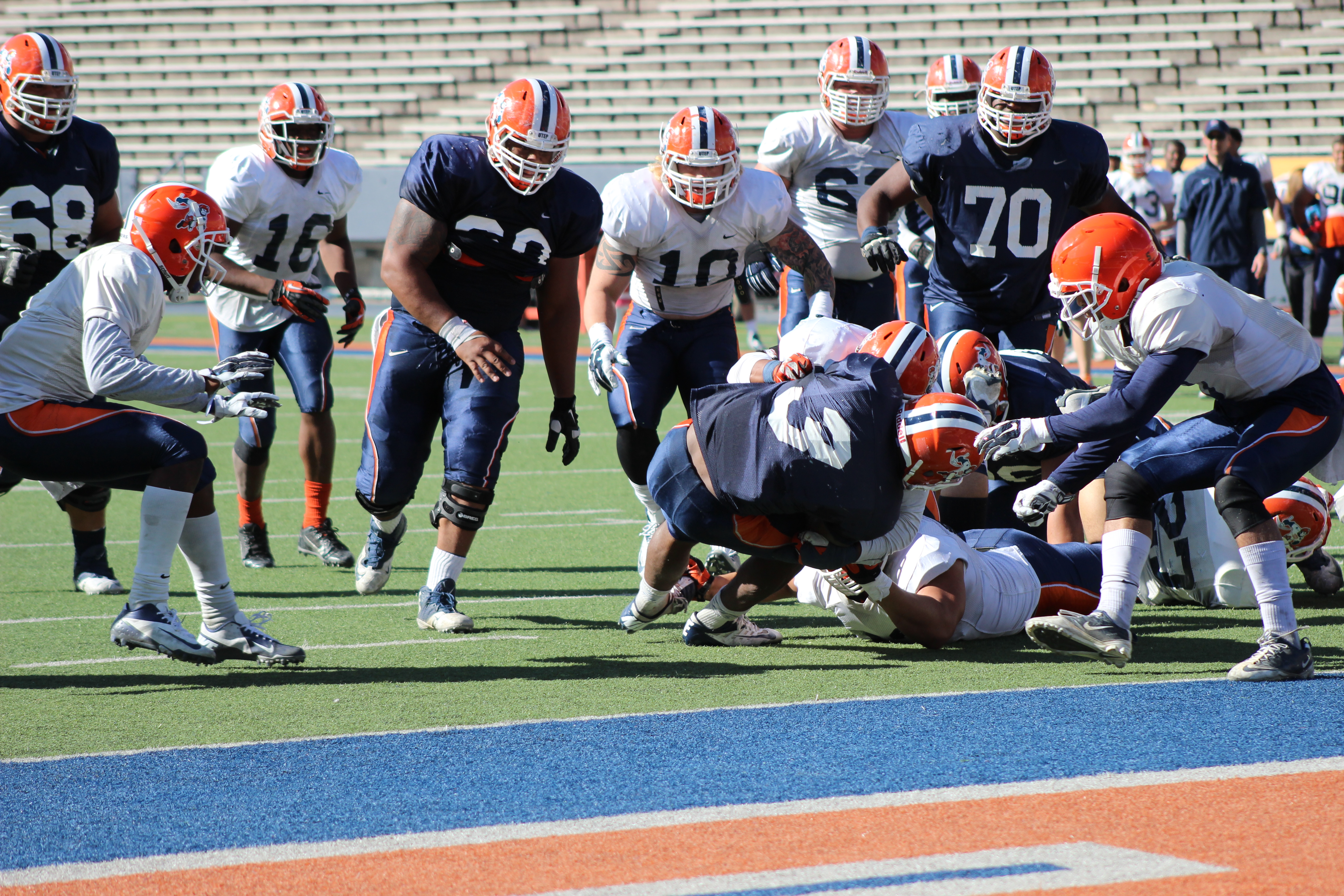 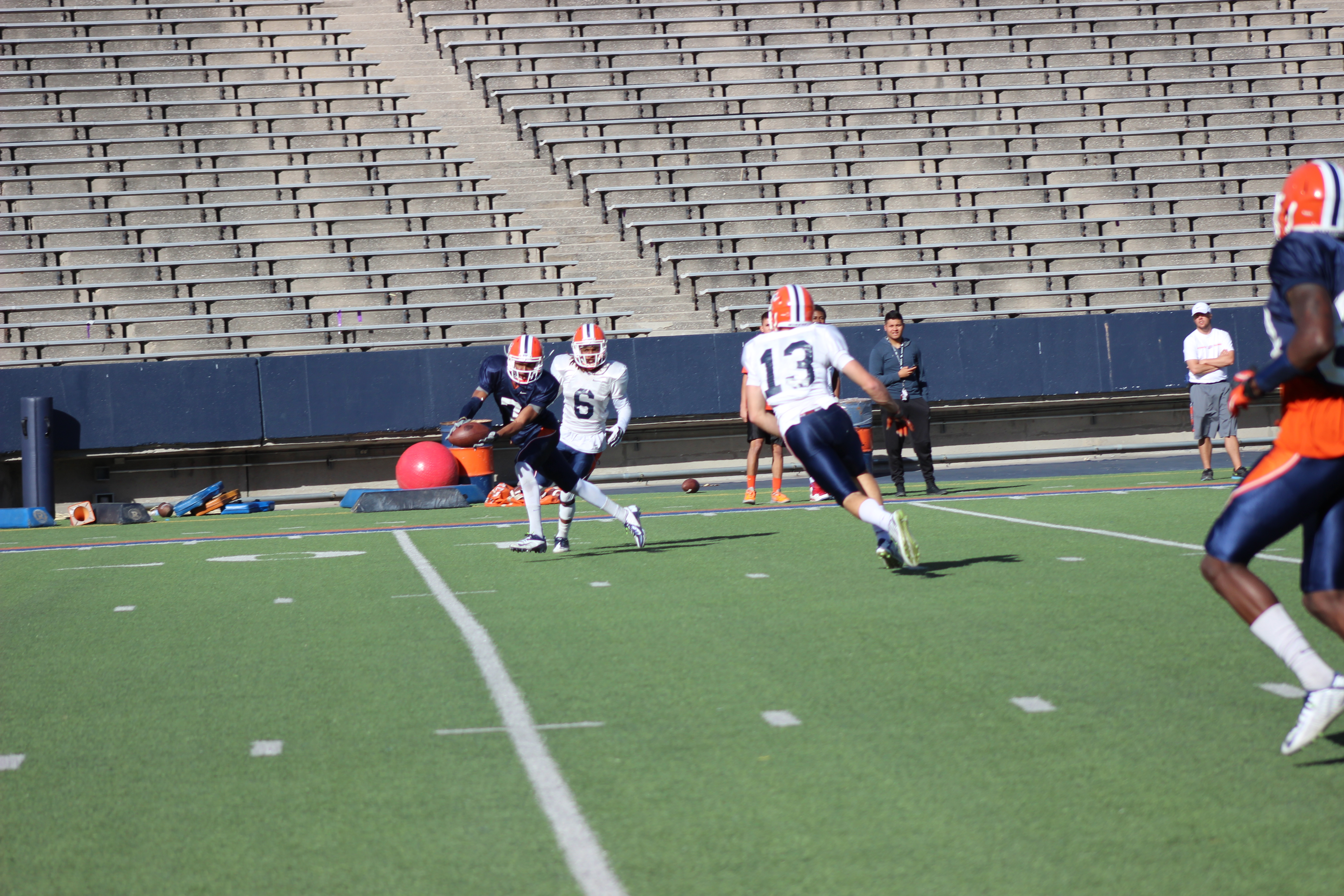 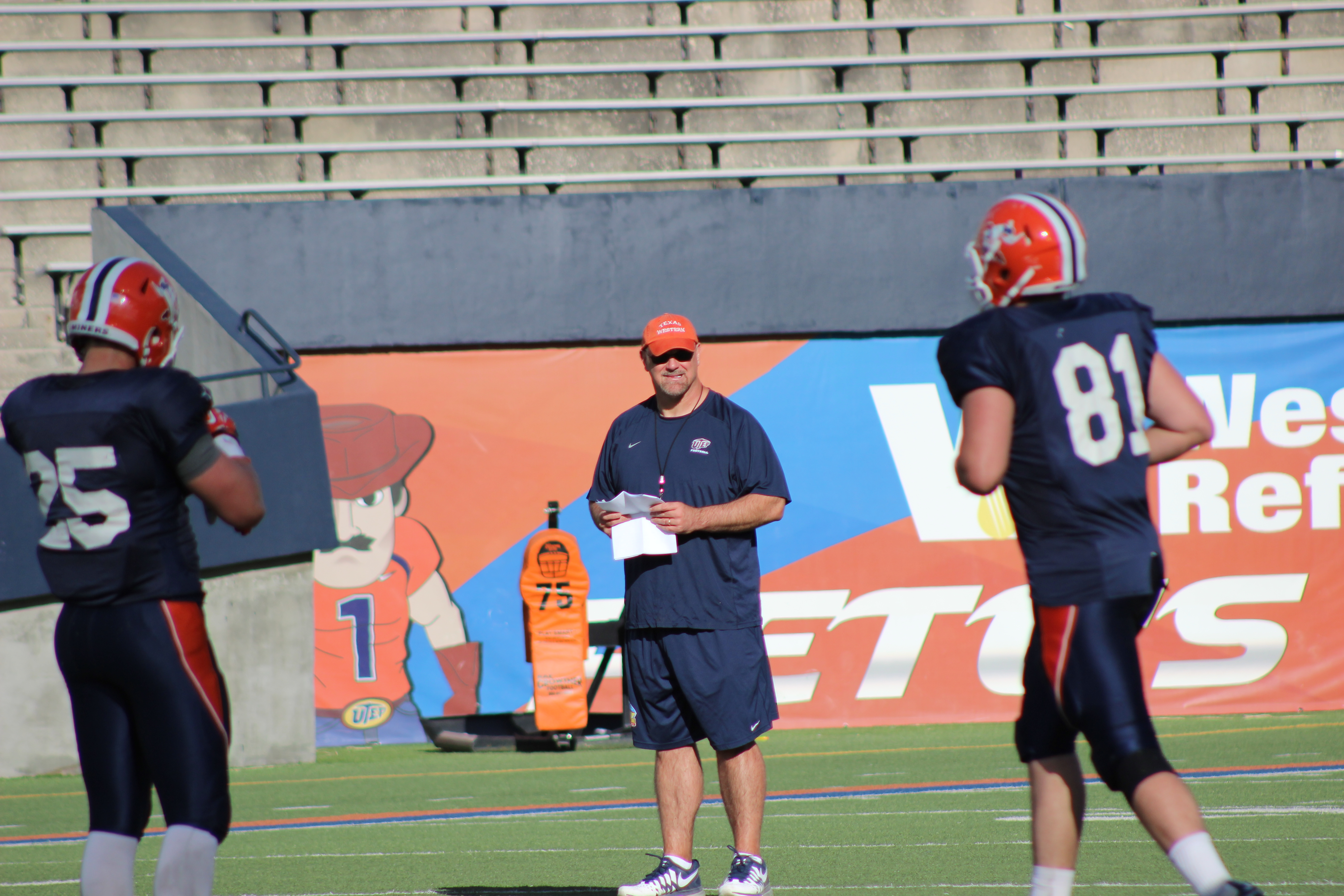 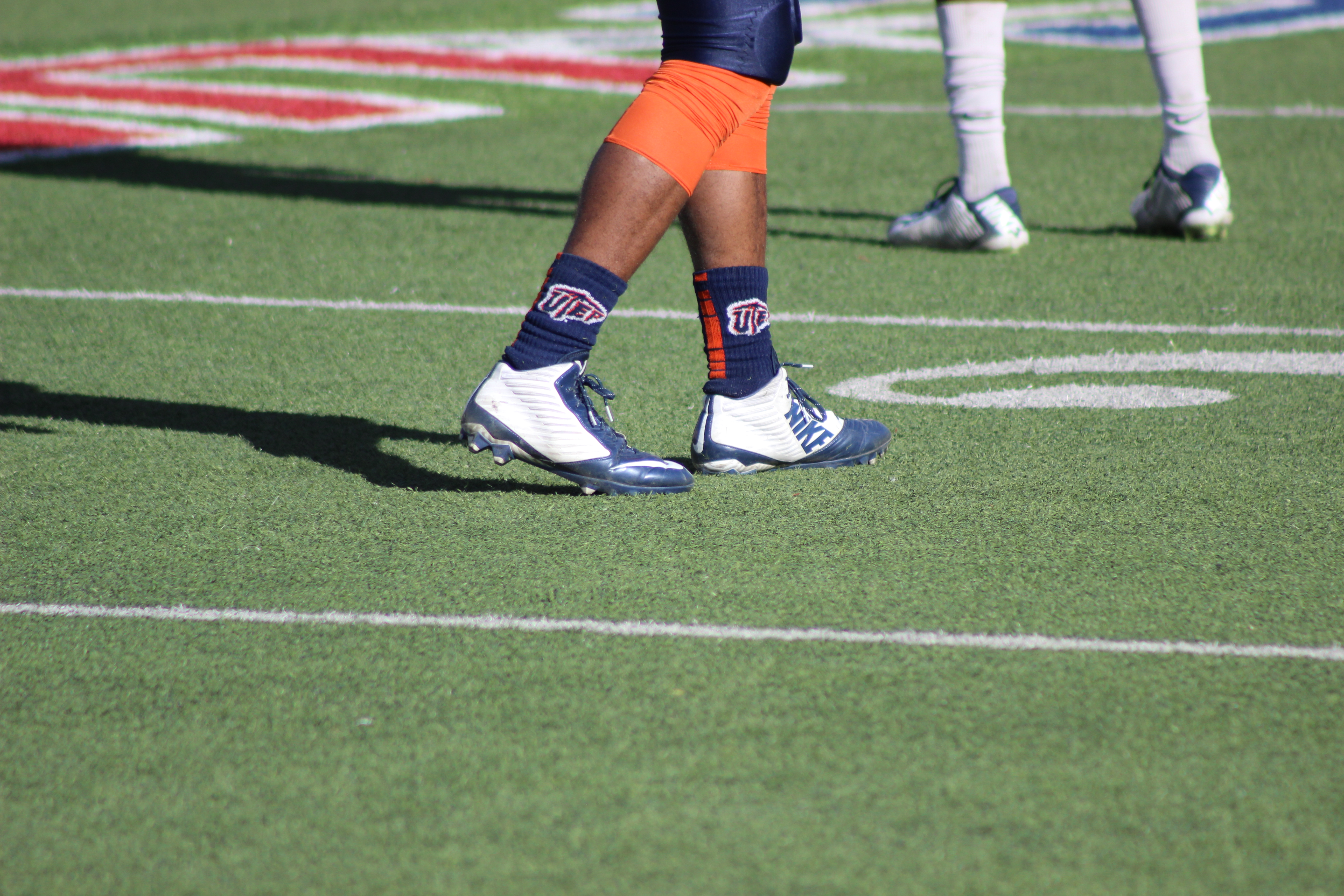 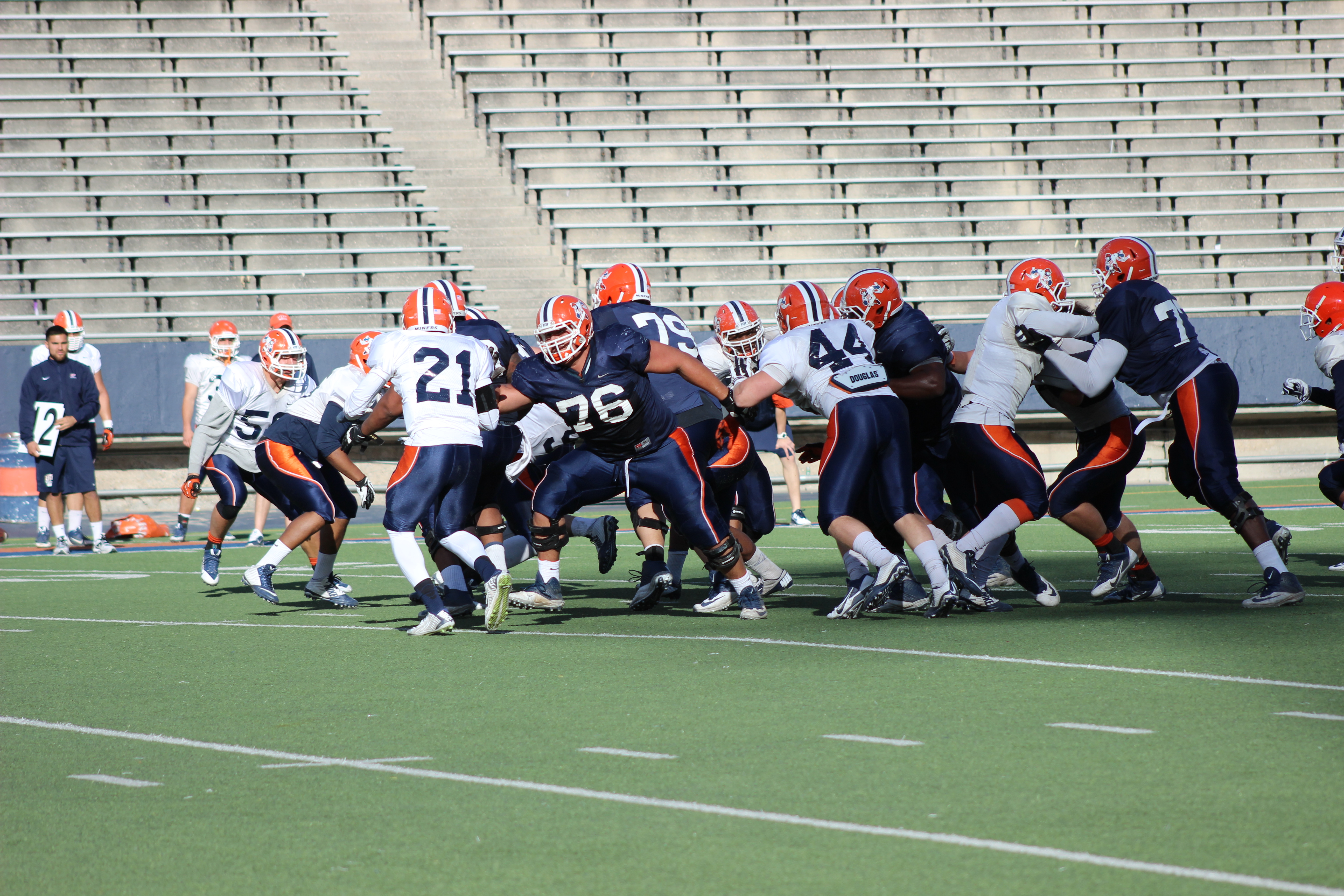 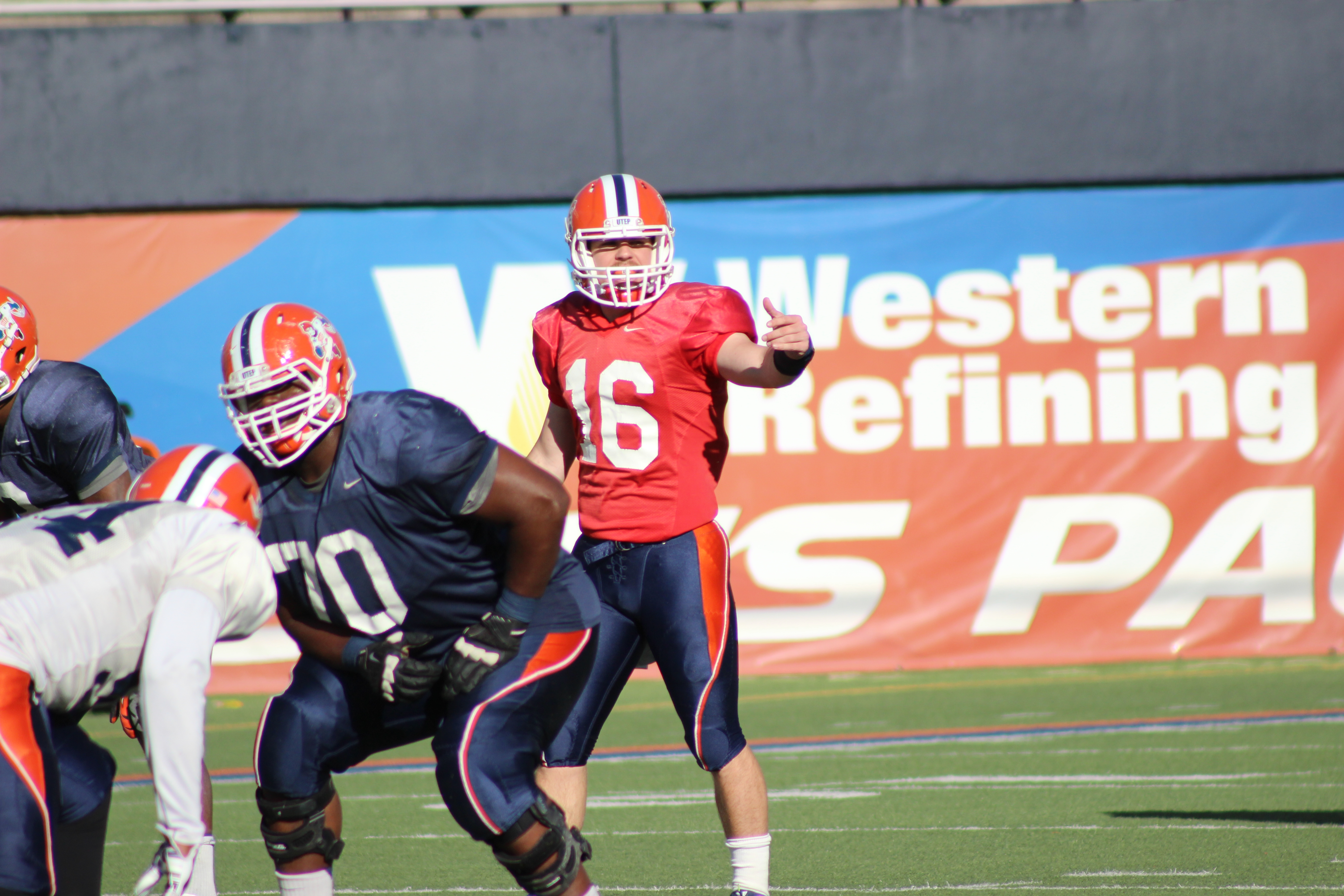 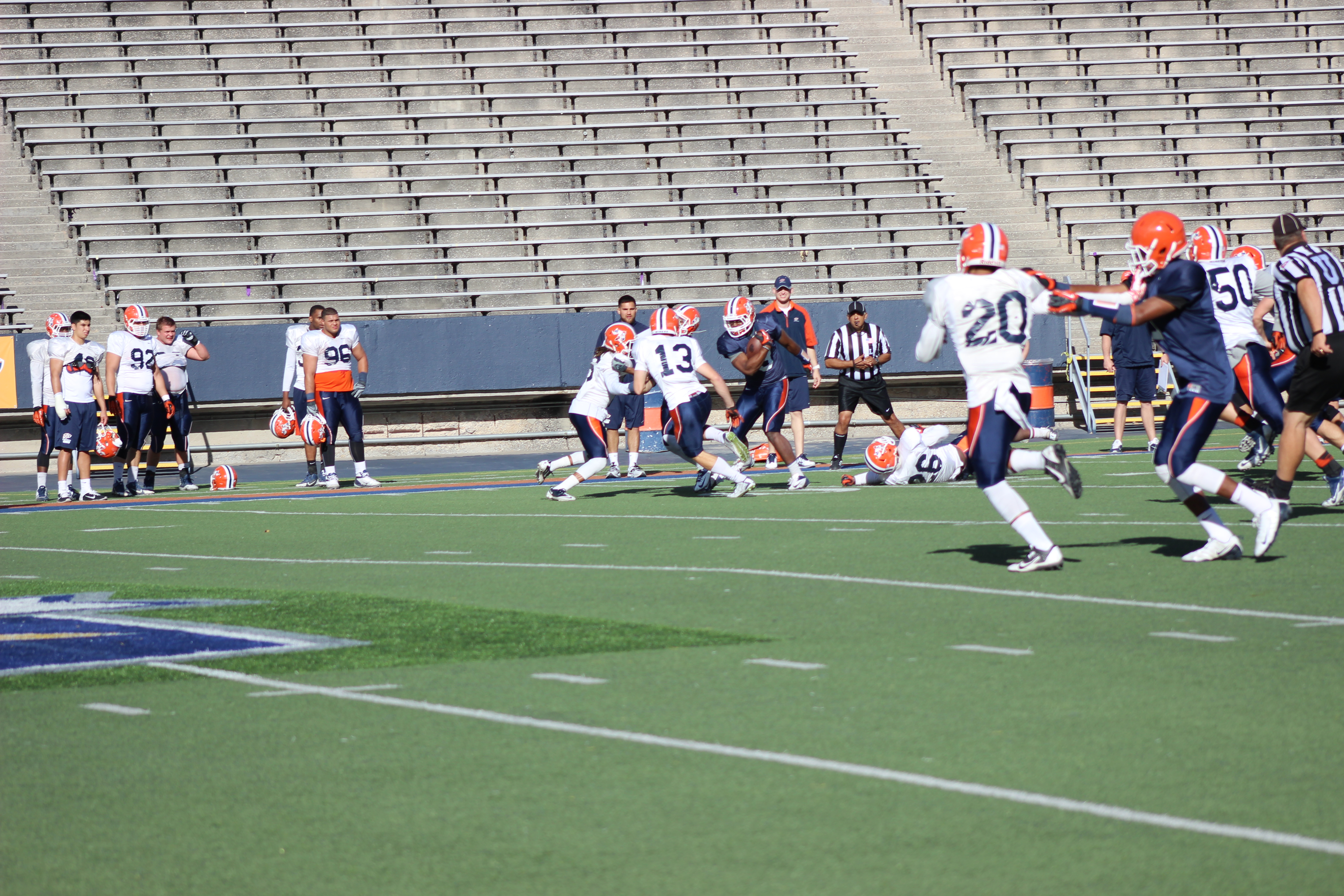