The C-USA coaches polled their preseason and all conference picks.

UAB grabbed 11 of the 14 first place votes, while Old Dominion picked up three for a second place nod to stake their claim as the two best returning squads from a year ago.

Middle Tennessee was voted ahead of the Miners in the third spot, with Louisiana Tech right behind rounding out the top-five.

UTEP's senior guard Earvin Morris was named to the ten man all-conference team.  The senior from Memphis was second on last year's team in scoring averaging 11 points per game, and scored in double figures in 13 of 18 conference games last year.

Conference USA will open its 21st men's basketball campaign on Friday, November 13, and the season will culminate with the 2016 Conference USA Basketball Championship, March 8-12 in Birmingham, Alabama. UAB will serve as the host school for the second year in a row. The men's championship game is slated for Saturday, March 12 at 2:30 p.m. EST/1:30 p.m. CST, and will be televised on FOX Sports 1. 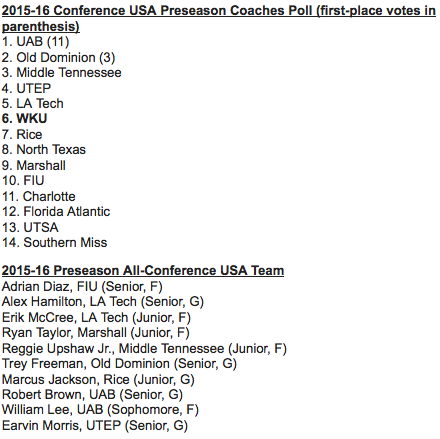