The Miners started slow, but finished strong in their first exhibition of the season.

Minus three potential starters, and their head coach.  UTEP scratched and clawed their way to a 78-69 win over D-2 Cameron on Saturday afternoon.

Lee Moore led UTEP with 28 points, and 11 rebounds on 8-of-14 shooting from the field, including a personal 9-0 run in the final three minutes to seal the win.

The Miners got off to a slow start in this one, starting 2/7 from the field in the first seven minutes, and found themselves down as much as six in the first half.  Cameron grabbed a 37-35 lead at halftime after Aleksandar Malinic drilled a three point buzzer beater to end the first half.

UTEP shot 40.9 percent in the first half, and went 1-of-8 from three point land in the first twenty minutes of action.

Cameron would answer that run with six straight points as James Cross' dunk tied things up at 45 just a minute later.

Neither team would stretch a lead bigger than four in the next nine minute segment until Moore took over down the stretch as the game was tied 16 times, and the lead changed hands 19 times.

Moore sank a three pointer, finished home a fast break dunk, then swished home another triple to give UTEP a 76-67 lead with 1:41 left in the game.

Victor Mbachu sank two free throws with 25 seconds left to give him 14 points on the night, and avoid an exhibition upset to start off the season.

Moore and Mbachu were the only Miners to reach double figure scoring numbers.  UTEP turned it over 19 times which led to 19 Cameron points off UTEP miscues and the Miners only had 11 assists.

Cameron hauled in 19 offensive rebounds even though UTEP outrebounded the Aggies 43-34. Both teams finished with 32 points in the paint, and Cameron shot 7-out-of-27 from three point land.

Deondre Ray led the Aggies with 18 points, Tyler Williams came off the bench to add 13 points including a trio of three pointers.

Paul Thomas turned in an nice effort for UTEP with seven points and seven rebounds, Hooper Vint added eight points and six rebounds for the Miners.

UTEP shot 52 percent from the field in the second half, and shot 30-out-of-37 from the free throw line in the game.

An hour before tipoff, Tim Floyd found out his sister had passed away which is why UTEP's head coach was absent from Saturday's exhibition tilt.

UTEP hopes to get their missing pieces back before the next exhibition tuneup next Saturday evening. 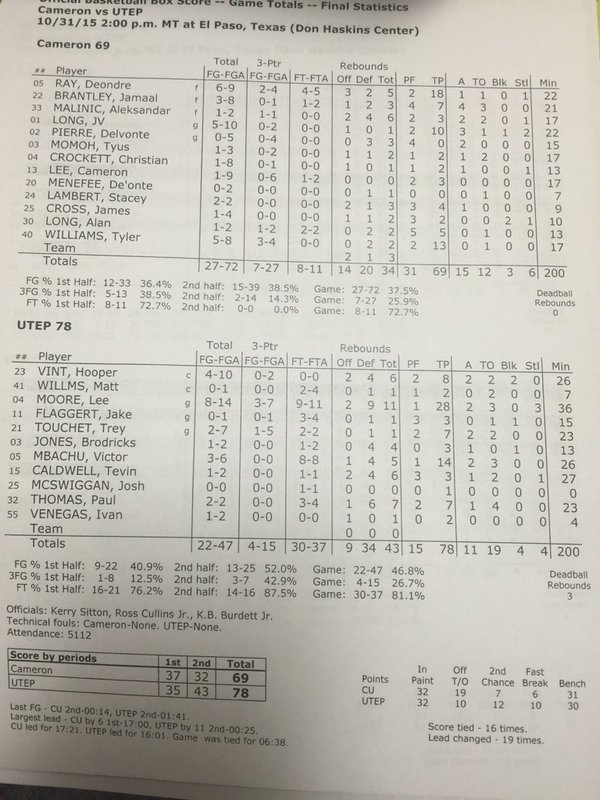