UTEP heads into Hattiesburg with a new punt returner, and a small adjustment along the offensive line.

The Miners will also be without freshman offensive lineman Darren Gatewood who had be inserted at starting right guard against FAU, but went out with a major foot injury during the fourth quarter of the FAU game.Kugler indicated Gatewood has a dislocated foot that requires surgery and will miss the rest of the season.  Reserve offensive lineman and fellow red-shirt freshman Chris Misaalefua has also suffered a dislocated foot and will also miss the rest of the season.Gatewood was UTEP's backup center for most of this season, and that role will now go to sophomore Erik Ramirez who played the last three games last season at center.Derek Elmendorff will be starting at right guard after sitting out most of the FAU game.

"There's been situations in where a guy is probably not playing as up to par as you want them to." Kugler said of Elmendorff.  "You sit them down for a game, and they realize what they're missing.  Derek Elmendorff has played a lot of football for us, and he's a very good football player.  So he's going to get an opportunity in this game, and I expect him to play extremely well."The backup quarterback spot has been a main depth chart story this season, and this week only Ryan Metz is listed as QB2.No other notable adjustments were made as UTEP prepares to take on a much improved Southern Miss. this Saturday after noon on the road. 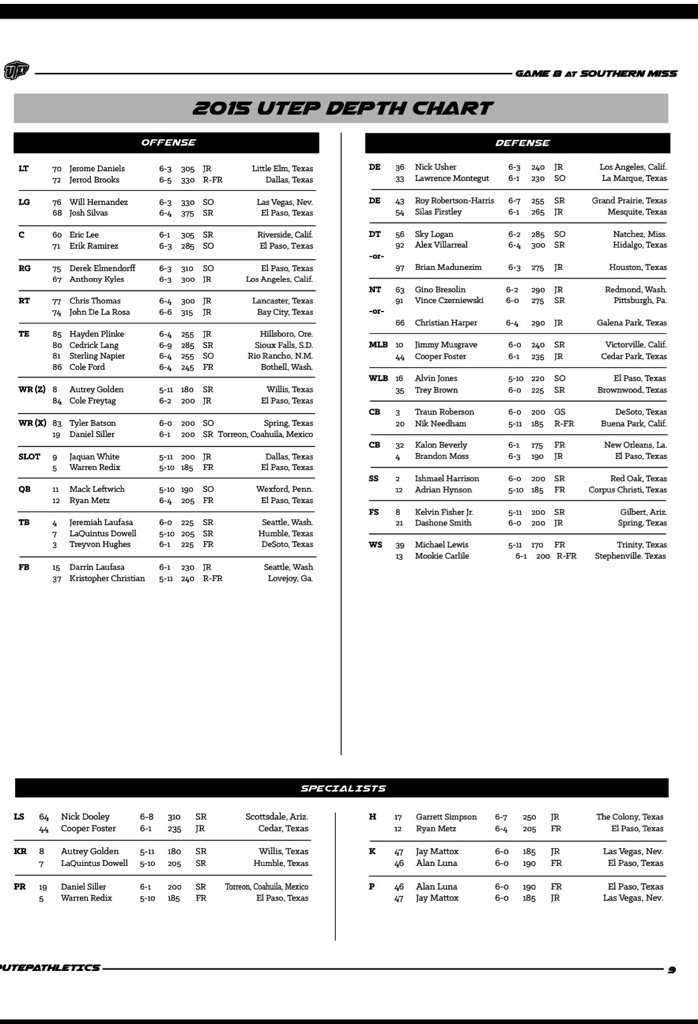