Jameill Showers led a touchdown drive in the 2015 NFLPA Collegiate Bowl as the National Team blanked the American Team 17-0.

Jameill Showers led a game opening scoring drive consisting of 12 plays and 80 yards to jump start a 17-0 offensive struggle of a win for the National Team in the 2015 NFLPA Collegiate Bowl Saturday afternoon.

Showers was 2/2 passing for 22 yards, and scrambled for 19 yards during the opening drive, he finished the game 3/9 for 29 yards, finishing with 20 yards rushing after a few kneel downs in the final seconds.

No quarterback finished with more than 51 yards passing in the game as consistent offense and quarterback play was hard to find throughout this one.

Showers' touchdown drive actually ended with National running back Terell Watson falling on a fumble exchange at the goal line for game's first score.  Showers played majority of the first half, but saw only two drives in the second half which were both in the final six minutes of the game.

Eric Tomlinson had three catches for 14 yards for the American Team who put together only 179 yards of total offense, Tomlinson also saw plenty of action on special teams.

The National Team took a 10-0 halftime lead, and South Alabama quarterback Brandon Bridge guided a 7 play, 64 yard scoring drive capped off by a one yard run from Eastern Kentucky's Channing Fugate to put the National Team ahead 17-0 with 6:10 left in the third quarter.

While Showers did not have the best passing numbers on the day, he was a victim of usual All-Star game offensive line struggles, although did display way above average scrambling, and maneuvering ability in and out of the pocket with all of his snaps coming from under center.

He was also the victim of a pair of third down drops, and may have turned some NFL heads with his athletic ability and poise in the pocket a la dare I say it......Russell Wilson.

Tomlinson split time with Alabama tight end Brian Vogler, and Tomlinson was his solid run blocking self, and showed he could bring some toughness to an NFL special teams unit with his ability to move around swiftly with his size.

Terell Watson from Azusa Pacific took home MVP honors as he led all rushers with 55 yards on nine carries and the fumble recovery for a touchdown for the National Team.  The National Team rushed for 180 yards as a team, though both teams were a combined 5/25 on converting third downs.

Marshall's Rakeem Cato was teamed with Tomlinson on the American Team and was 5/10 passing for 31 yards.

UTEP's unquestioned locker room leaders this season in Showers and Tomlinson sadly played their final games with Paydirt Pete on their helmets in sunny Carson, California, after snapping UTEP's bowl drought this season.

The draft process will continue for both in the coming months after solid showings during the week of practice, and proving they belonged on the field today and possibly on Sunday's. 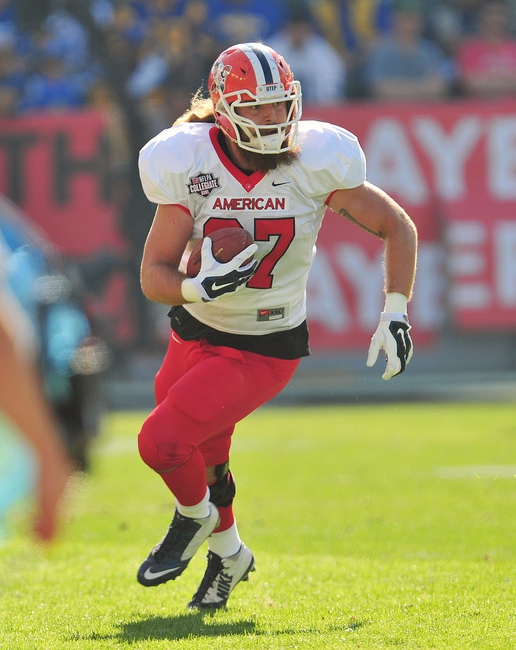