We have all said it was needed, now Hunter seems to be delivering with the J, but how much more will we actually see it possession by possession?

If you noticed anything different during UTEP's recent two game home stand, it had to have been Vince Hunter's aggressiveness with his jumper.

By my unofficial count and without any film, VH was 3/7 in his attempts from outside of his usual offensive realm meaning from 14 feet out to the three point line.  He even hit a three pointer from the right wing during UTEP's 11-2 run at the end of the first half of the LA Tech loss.

Even if VH isn't shooting 45 percent or more from 14 feet and out, the fact that he is pulling it confidently will change the way teams defend him and the Miners.

LA Tech's Michale Kyser did not nudge once on a pump face with Hunter facing him up in or outside the paint, but if VH can make the jumper part of the UTEP offensive attack, teams will have to start respecting the pump fake and jumper itself, thus opening up his offensive game even further.

Hunter has NBA level moves on the block, and around the rim.  If teams start to respect his jumper he can use the pump fake more efficiently with his gallery of moves that can open him up for more consistently clean looks around the rim, and it could even get him to the free throw line more.

The pump fake could also open up other shooters, and consistent divers and cutters like Cedrick Lang if Hunter can drive with a clear lane off the fake.

Opposing coaches have been probably preaching the fact of not biting on VH's pump fakes during preparation on playing UTEP this season in my honest opinion. 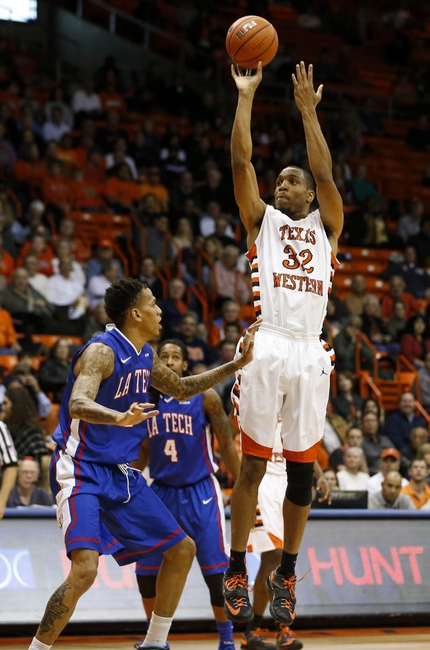 Photo cred: USA Today, look at where Kyser is as Hunter releases

Saturday night a VH jumper came on the first pass of a half court/sort of a transition possession, Hunter realized the defender's hands were down and boom, an 18 foot bucket in perfect offensive flow was swished.

Another thing to note is the jumper's that he is taking are smart, and good looks in perfect rhythm of the offensive set and usually came when the defender was digging in to guard the drive with hands at the side or stretched wide.

Hunter can open UTEP's offense way more by simply just taking the jumper (smartly of course) so teams can't load the lane like LA Tech did.  Everyone talks about Vince needing a jumper to become a surefire NBA prospect, though Hunter needs to develop the jumper to help UTEP navigate smoothly on the offensive end through conference play per what we have seen so far.

Matt Willms also showed some confidence in pulling the 14-18 footer with no hesitation.   Willms did the same as Vince on a pass at the top the of the key against Southern Miss., albeit during a true half court set  The defender's hands were down, and as soon as he caught it Willms calmly nailed an 16-18 footer from above the free throw line in rhythm off the pass with a perfect set shot form.

More than "well yeah they should be taking those shots they are usually open from there" it's also showing both have the basketball IQ to notice that most people don't respect their jumpers, giving UTEP more fuel to a scouting report if this becomes efficiently consistent.  And they both have shown they are capable of knocking those down without hurting the offensive flow.

When asked about Hunter's taking of more outside shots, with a playful smirk coach Tim Floyd replied, "Let's just hope they keep going in."  It  very well could be something empathized in practice over the past two weeks, and you can tell VH has been working hard on it as fluid as his jumpers looked this past weekend.

UTEP can use any sort of extra dimension offensively at this point, and if it means Hunter is hitting jumpers, just imagine what happens when defenders start biting on his pump fakes, because well we all know what will happen after they bite.