If UTEP's performance wasn't inspiring enough against Texas Tech, just wait until they play a heated rival this Saturday.

Share All sharing options for: El Paso Is Burning

To describe UTEP's performance against Texas Tech as thrilling would be a massive understatement. This game had all the elements going in the Miners' favor for an upset. A late start time, national TV audience, a raucous and frenzied Sun Bowl, and a team that could almost taste a victory. It was the perfect scenario to upset a Power 5 team only 340 short miles away. Unfortunately, not all that goes well will end well as the Miners found out losing a heartbreaker 30-26.

The final potential game-winning drive left the city of El Paso shocked and many with unanswered questions. A reeling fan base took to Twitter searching for answers to why UTEP went away from the running game when it nearly paved the way to a massive victory.

We don't have those answers and maybe never will. But what we received in exchange for all the questions, were the answers on the field in these first two games:

With all that said, there is a lot this football team needs to improve on. Against Texas Tech, quarterback Jameill Showers did not look comfortable all night long and was forcing some throws. He looked in disarray all night and couldn't find a rhythm. The offense needs to hold on to the football, luckily they managed to get back both fumbles that hit the turf. Defensively, tackling in space is an issue Kugler stated in his Monday presser that needs to be cleaned up. Also, keeping contain responsibilities up front was a problem as well, allowing TTU QB Davis Webb and RB Justin Stockton to hit the edge for gains.

Now the Miners shift their focus to a heated and fierce rival in New Mexico State. The Aggies haven't had much luck in the Battle for I-10 of late and the Miners plan to keep it that way. Coach Kugler said it best about the rivalry in his Monday Football Media Luncheon:

Anytime New Mexico State and UTEP get together, it's a hard hitting rivalry game that i really enjoy being a part of. I don't take it for granted. I enjoy being a coach and I enjoyed being a player in this rivalry. it's truly what rivalry games should be about. There's a lot of passion and both sides want to win badly and both sides are prepared to do that. I'm excited about the preparation this week getting ready, I know they are too, and i'm hoping to have a packed Sun Bowl Saturday night.

Something is brewing in El Paso, the fan base knows it and so do the players. You can hear it in their voice and what they had to say after the Tech loss. They come into every game expecting to win and Kugler echoes the same sentiment. Coach Kugler has instilled toughness and the will to finish and that it was incredibly apparent in game two. Blockers finishing their assignment past the whistle. Both offensive and defensive lines were pushing so hard you'd think they were playing for a conference championship.

Well, maybe this team realizes it's potential. The potential to line up against any college team on any field in America and play smash mouth football. I will say this now, Aaron Jones, Jeremiah Laufasa, and Jameill Showers can run on just about any defense in the state of Texas. Don't believe me? Watch film on Aaron Jones, Jones is currently the nations leading rusher with 384 yards and 5 touchdowns. That's not only a credit to Jones but a testament to the growth of the offensive unit as a whole.

Saturday was a moment that was a long time coming in El Paso. Though the job was not done, the performance the Miners put up is hard to ignore. Is this team ready to challenge for a C-USA title? That's still to be determined and yes, it is still too early to tell. This team looks hungry, it looks angry, and it looks ready to rise to the occasion. This weekend against a hated rival, UTEP needs to take their play up more levels than it was on Saturday. Expect the White Out to have the Sun Bowl on fire. 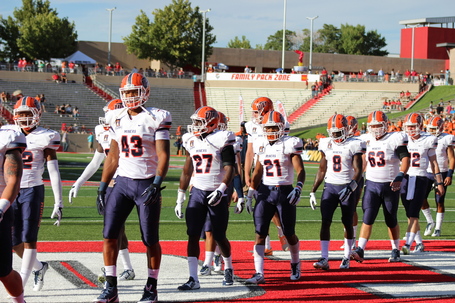