Beyond The Box Score: Kugler Ball

If you were in the Sun Bowl last night you witnessed the identity UTEP has implemented as a culture.

Share All sharing options for: Beyond The Box Score: Kugler Ball

Long, methodically planned out run heavy drives, a physically overpowering offensive line, coming up with huge plays like forcing turnovers/pressure, and mentally bearing down to make a play on defense=Kugler Ball.

Last night was something Miner fans can expect from a Sean Kugler led UTEP team; flat out, straight up, big boy mixed in with plenty of mental toughness that cemented UTEP's wanted style of football.

UTEP simply pushed the smaller NMSU Aggies around with a mentality to wear them out physically so mentally, tired running scared mistakes would happen on both sides of the ball, leading UTEP to put the pedal to the metal and finish off the Aggies with a 42-17 lead with five minutes left in the game.

The Miners scored on three of their first four possessions in a physical, creative way, driving deep inside the 50 on their final four drives of the night, cashing in with touchdowns on the last three drives of the evening to close out the Aggies and keep the traveling trophies here at UTEP as now six year El Paso residents.

One common trend that is the biggest identity UTEP has taken on offense in the first three games: in five scoring drives that were all over 60 yards, UTEP ran at least nine plays or more in all of those drives that ended in touchdowns after more than four minutes of pounding and stick moving.

Late in the third quarter UTEP went on a 10 play 85 yard scoring drive that mirrored the attitude of the head coach, and the attitude this team and future teams will bring. 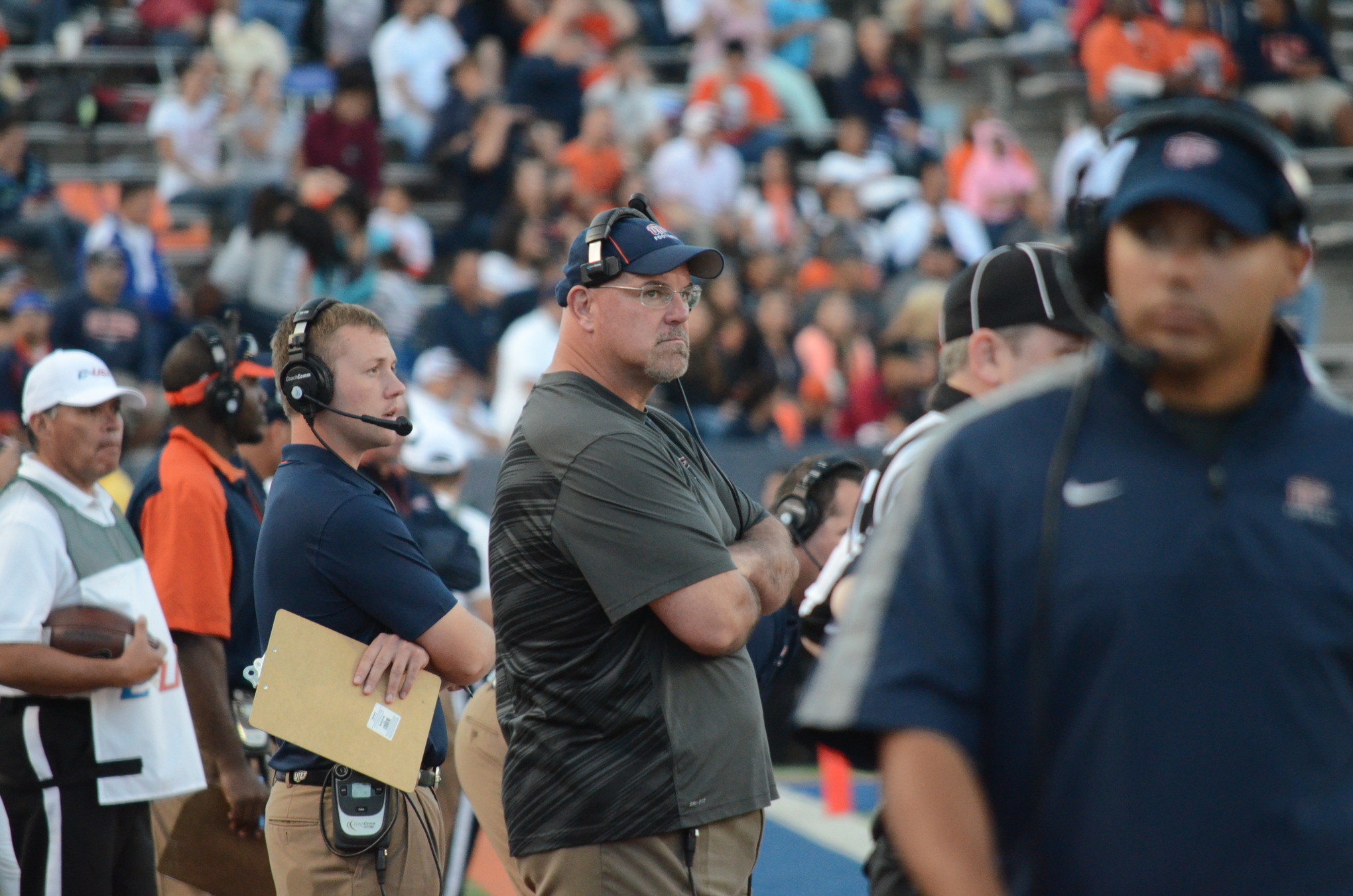 Using all runs with a 8.5 per clip average, the Miner offensive line separated the men from the boys with the physical, screw you like drive that forced NMSU to burn a timeout during the 10 play onslaught as they had no answer for the Miners dominance of the line of scrimmage.

Blockers blew guys off the line, and runners ran hard and with a purpose to ram it down the throat of the smaller, and hands on the hips body language that was the Aggie defense.

This mentality, scheme, or what I like to call it; overall will to just literally beat some ones ass with something the defense knows its coming, but cant stop or slow down is the new brand of UTEP football.

For the second straight year UTEP was able to wear down the Aggies in the second half by simply challenging the offensive line to move UTEP across the goal line in keeping the clock bleeding for a win, all while using seven different running backs.

UTEP has shown the superior depth they have at running back in the first two games, but the Miners showed the crazy production the running back rotation is capable of as it was on full display mode Saturday night.

UTEP ran for 344 yards which was the most against a Division I opponent since 1991, also scoring on their first drive of the game for the third straight game.   UTEP pretty much averaged six yards per run on 56 called runs, and two Jameill Showers' scrambles.

Nathan Jeffery ran hard, and literally all over the NMSU defense finishing with 79 tough fought yards on 12 carries, which had NMSU on its heels helping Aaron Jones take over the second half/early fourth quarter to continue leading the nation in rushing this week after his 168 yard output on the ground. 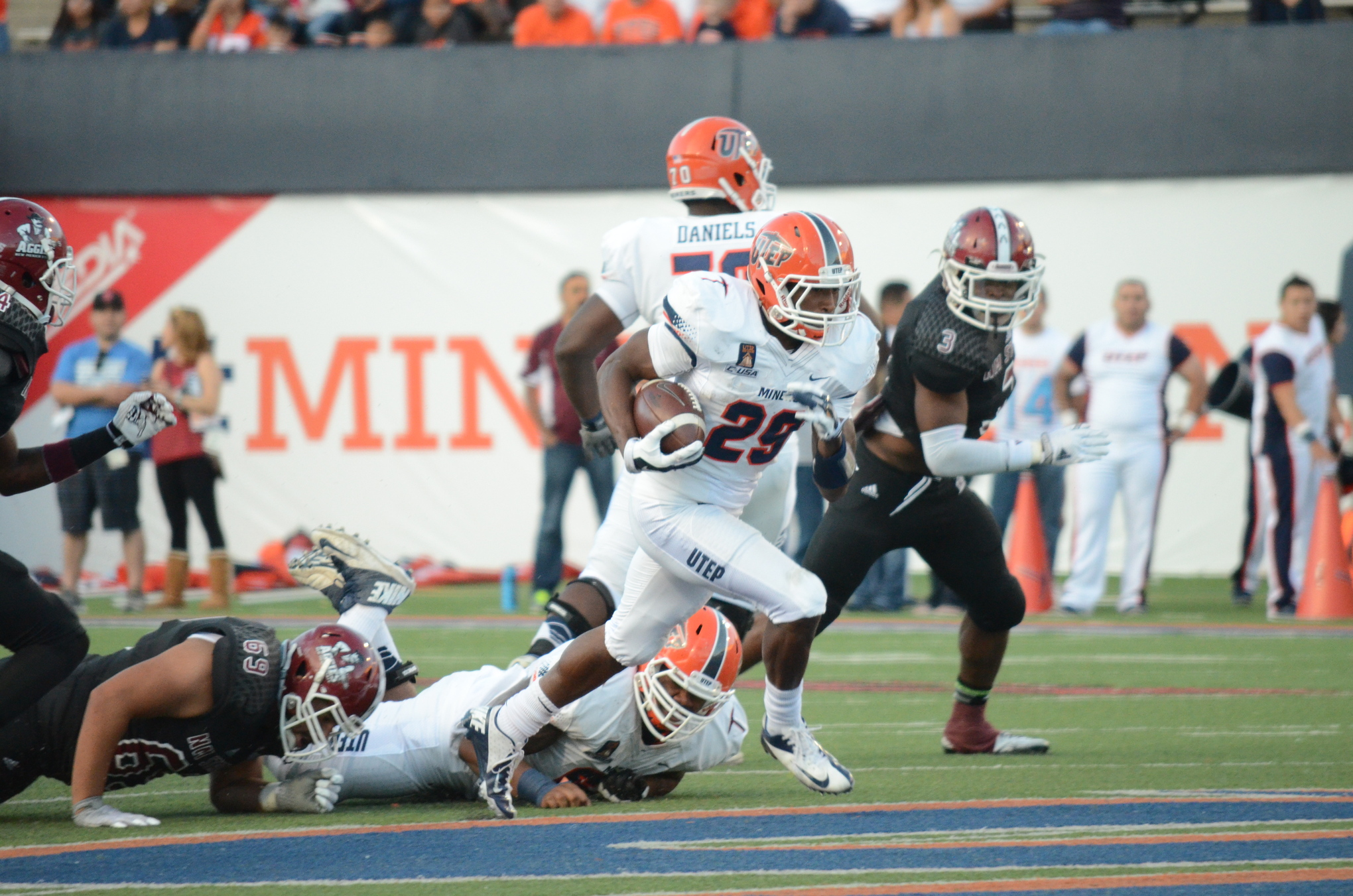 Jeffery was carrying, and dragging folks all over the field, in some of the best running Jeffery has displayed over the past two seasons.

The duo was apart of an intense five man rotation at running back until UTEP went to the 2's late in the fourth quarter with Jeremiah Laufasa, Darrin Laufasa, Josh Bell, and Autrey Golden all lining up at tailback at least once.

Depth, versatility, and the wow factor within the running backs, along with a nasty offensive line is something UTEP will be known for from here on out, and frankly its a joy to watch the creativity, and brute toughness the offense plays with.

Defensively UTEP did give up some yards in the pass game, though I have a valid explanation.

Coming into the game, statistically NMSU wasn't really a big play offensive team, with a long of 35 yards in the passing game, it appeared UTEP went with the soft zone to keep everything in front, thus forcing Tyler Rogers to show the NMSU passing game can be more than just dink and dunk, and I think the UTEP coaches can live with results.

UTEP took the short stuff away though in doing so they left themselves open for the big play with their loose zones, but another aspect of Kugler ball would hold true later in those drives: mental toughness.

Bending but not breaking, UTEP allowed 210 yards mostly to Teldrick Morgan who had 129 yards receiving at the halftime break, though UTEP forced NMSU to an 0/4 mark on third downs in the first half, and bottled up NMSU's run attack for majority of the game.

UTEP showed some holes in the secondary, but the game-plan could have been playing soft and keeping everything in front,  which paid off later in drives when UTEP sent pressure, and the young defensive line seemed to be challenged as UTEP toned down the blitzes for the most part leaving the pass rush up to the front four.

Nick Usher had a nine tackles, and while he didn't show up in the stat sheet like Usher, Roy Robertson really got after it as NMSU had trouble keeping him in front.

Robertson was credited with three quarterback hurries as him and Usher lived in the NMSU backfield for most of the night.

Very encouraging to see these guys create disruption against a veteran, and respectable Aggie offensive front.  Rogers had a case of happy feet in second half thanks to Usher and Robertson that lead to Damian Payne's first career interception.

At the end of the third quarter NMSU had thrown for 228 yards, though was 1/7 on third downs.   UTEP's defense is starting gain an identity of a defense that can come up with the big play on any given down (Wesley Miller's INT in the end zone on a big second down play).

Yesterday it was mostly on third down in spots where the defense had to get off the field and did, something I attribute to focus, and constant energy from key players even after giving up a play big play.  Even though they gave up more yards then they wanted to, the secondary stayed stout when they needed to be the most.

Showers completed his first nine passing attempts, most of them short hitches as NMSU showed eight to nine man boxes in the first half. 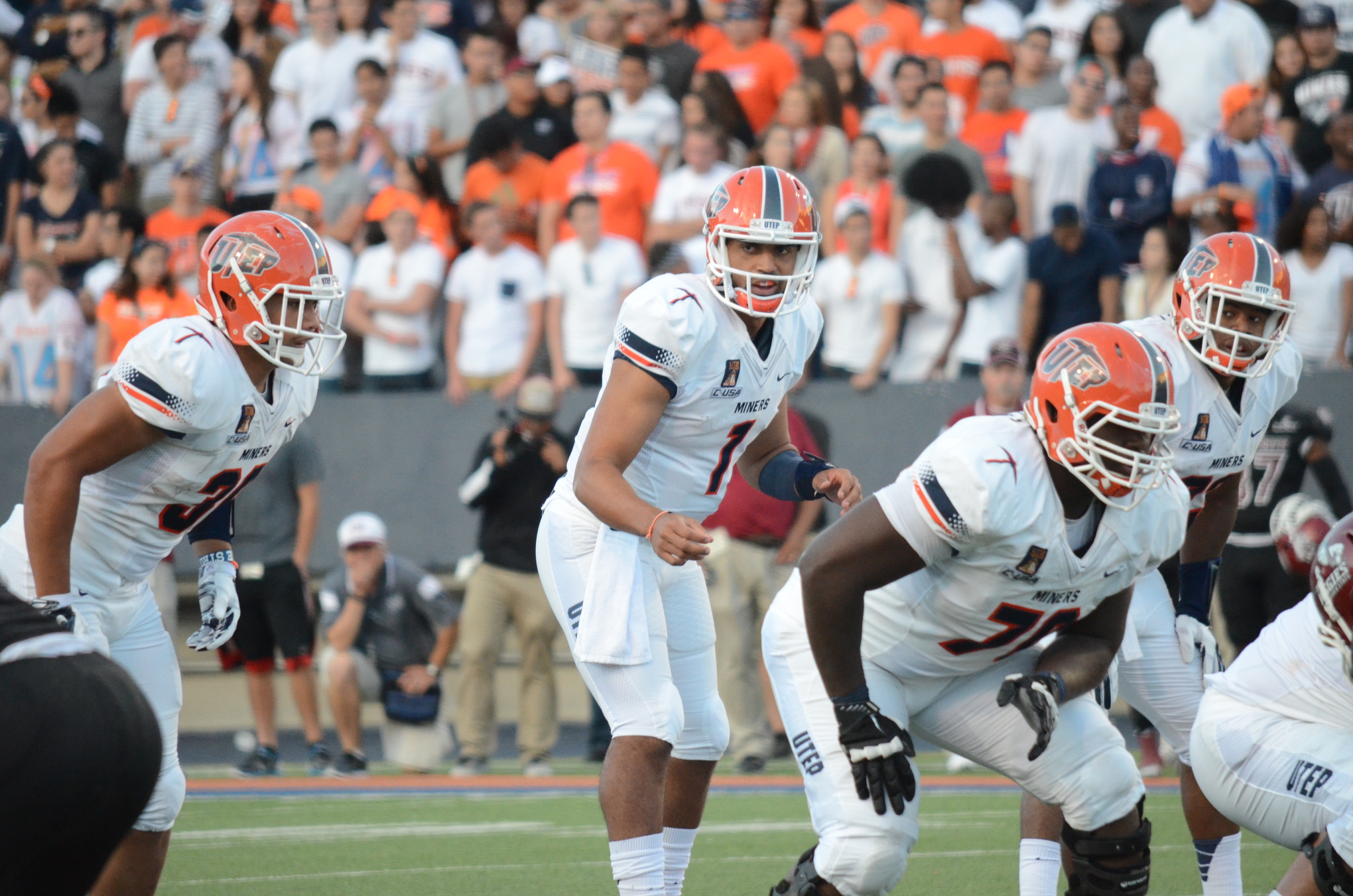 I can't decide which is more impressive, his 13 out of 16 totals from the the game, or his 3/4 passing for 26 yards on third down, adding in his five personal third down conversions, three via his legs.

The early confidence of going 9/9 to start put Showers in a rhythm to do what he does best in the UTEP offense, keep the chains moving on third downs.

Overall UTEP is playing the style of football that has been absent from college football for the past six or seven years, it may not be the glitz and scoreboard lighting up glam of the high powered offense's everybody runs now a days.

But if your a football purist like me, Saturday nights game was joy to watch, especially seeing a UTEP team physically, mentally, and methodically wear down an opponent, make that a rival opponent for the sixth straight time.