In continuing with our game week coverage, we take a look at a few position groups and what to look for this year, and beyond starting with the signal callers.

Things are usually smooth on offense with a senior quarterback at the helm, and UTEP has a legit and very capable all-conference caliber quarterback running the show in 2014.

Jameill Showers of course missed the final five games last season with a serious shoulder injury, although while he was healthy the production and knocking off of the rust into an efficient part of the offense was clearly there.

In his seven games in 2013 Showers threw for 11 touchdowns, and only four interceptions which accounted for his only turnovers of the season.  Showing a true dual threat catalog of skills he rushed for four touchdowns, while accounting for a passing and rushing touchdown in four of his seven games,  he also managed to run for 289 yards despite at total net loss of 94 yards due to sacks.

It appeared in the Colorado State game last year that Showers was given way more reign of the offense in terms of the passing attack where he registered career highs in attempts, completions, and yards to go along with another career high: five passing touchdowns.

All through the spring and fall Showers has said he was going to have more leeway in the offense in terms of calls at the line, and overall play calling.  This freedom could break Showers out in terms of guady stats and play making opportunities which feeds right into Showers' skill set.

My observation from the few practices I have seen is Showers has improved his already highly charted accuracy, and he just looked way more comfortable from breaking the huddle, to cadence at the line of scrimmage, and in the pocket in terms of his progressions and when to tuck it in and run.

Only knock on Showers last year could be his completion percentage after the New Mexico opener in which he would go on to finish at a 56.9 percent completion rate.  Though Showers took a huge step in his confidence from that Colorado State game going off for 237 yards passing and three touchdowns in a close loss to La. Tech the following week, getting in an efficient rythym is huge for him to put up those type of numbers on a consistent basis.

Ian Hamilton, Katrae Ford, and Eric Tomlinson have shown great chemistry with Showers from what I have seen during camp in passing drills, largely it was Showers showing off his superb touch to the bigger targets all in stride, a few with some tight coverage wrapped around it.  Showers has that ability to make other players better namely UTEP's group of young un-proven receivers.

Also having Aaron Jones as a weapon in the passing game out of the backfield, and in the slot will also help Showers' passing numbers and give the offense some new tricks.  Jones and Showers hooked up numerous times down field in stride in a recent drill, with a high level of continuity, showing me the Miners are looking to be more versatile on offense.

His leadership and competitive gene is another IT factor Showers has in his favor, its going to be fun to watch his continued growth, and play making ability this season, hopefully for a full season.

For the first time in quite sometime UTEP did not sign a quarterback in its recruiting class, and from what I saw in camp there was good reason for it. 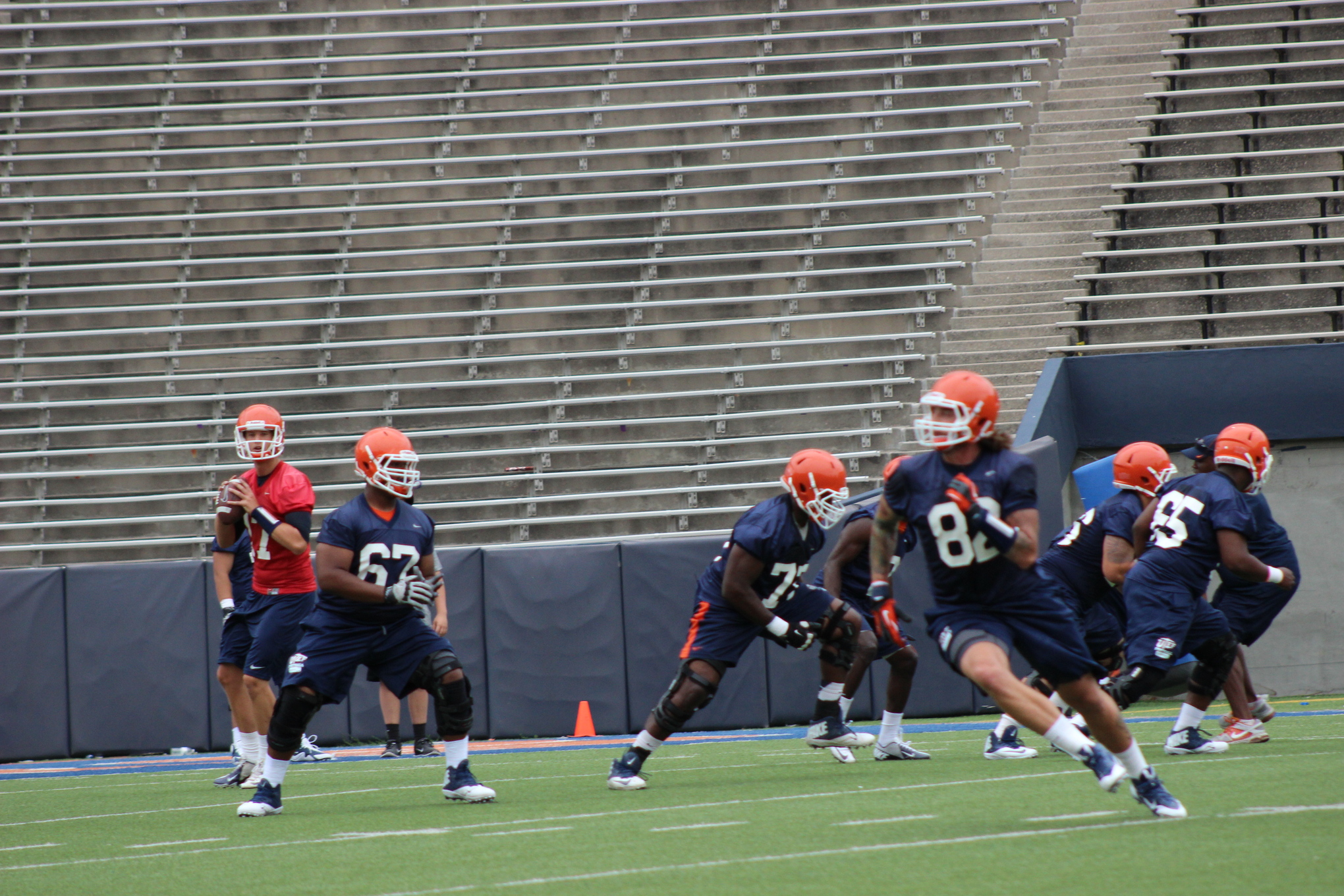 Of course I would love see top UTEP quarterback prospect Emanuel Gant sign with UTEP in 2015, but there is some talent waiting in the wings.

Mack Leftwich still struggles with certain decision making options in terms of speed off the snap, and getting rid of the ball, but his confidence has improved, and I saw him make some throws during 7 on 7s, and 1 on 1s that he couldn't or wouldn't even attempt last year.

Leftwich along with El Pasoan and Andress grad Ryan Metz have me thinking UTEP will be okay at quarterback in the future.

When you watch Metz the first thing you notice is his presence in the pocket.  He has the prototypical attributes of a pocket passer; stands tall, keeps his eyes down field,  has great mechanics and even better footwork. Though Metz can move around the pocket and could eventually blossom into a capable runner as well.

Like Leftwich, Metz has a high football IQ, and has played in three different offensive schemes in as many seasons dating back to his junior year at Andress which shows me he is smart enough to handle adjustments. 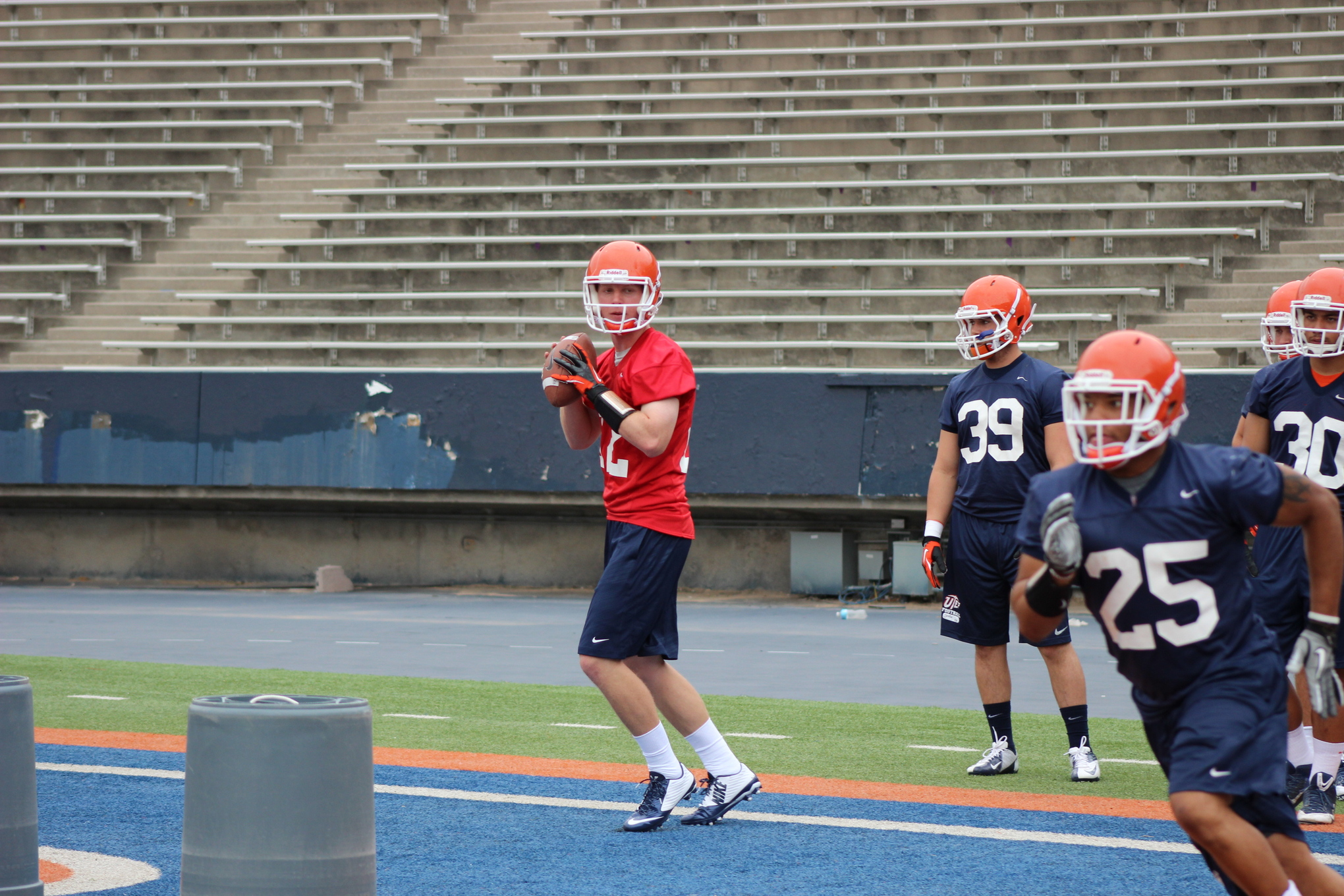 If we fast forward to next year there will be a quarterback competition and if this year's camp depended on naming a 2015 starter I would say Metz has the upper hand over Leftwich, but that's looking a bit too far.

You can't forget about sophomore Garrett Simpson figuring into the 2015 starter mix as well, who is the more physically polished of the youngins behind center.

Simpson didn't do anything special during my observation times in camp, though we all know Simpson has some physical skills to be a legit starting quarterback, the main demerit on Simpson has been his mental curve of the system.

2014's official backup is unknown, Simpson and Leftwich took equal snaps in some periods in camp, and it seems we will find out if Leftwich will be attempted to be red-shirted again or not if there is a blowout and the second team is called on in relief.

Simpson would have my nod at backup this year, but certain reps that I saw in camp show Leftwich is not that far behind.

Metz will quarterback the scout team this season, and presumably take a red shirt in 214 leading into a really interesting battle for the 2015 starter which starts next spring.