The hometown hero capped his career as one of the best players to ever don a Miner uniform.

Robert Rodriguez is UTEP football. Born and bred in El Paso, Texas, Rodriquez embodied the position with his toughness and grit. Those two attributes combined earned him a spot in the UTEP record books with a whopping 443 tackles with 33 of those coming for a loss. He is in the top five all-time tackles in UTEP history.

In his four seasons at UTEP, Rodriguez lead the WAC in tackles in three of them. In 2004, Rodriguez lead one of Mike Price's finer Miner teams to an 8-4 record and a berth in the Houston Bowl. Also that year, he was named the 2004 WAC Defensive Player of the Year. 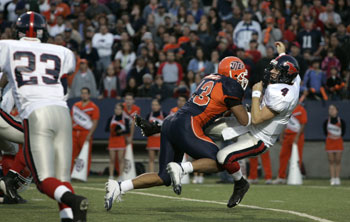 After his senior season, Rodriguez went on to play in the East-West shrine game and had NFL stints with the Titans, Panthers, and Seahawks.

Rodriguez is currently the Assistant Special Teams Coordinator for UTEP and also in charge of the Safeties. In Rodriguez fashion, the Miners' top two tacklers who were both freshman safeties from 2013 were under his tutelage.

The former Montwood star running back is the biggest UTEP fan you will ever meet, Rob Rod forever will be a UTEP legend.