Share All sharing options for: Three Reasons Why There Will Be An Actual Pass Rush in 2014

Without being biased, or wearing Orange glasses I will boldly make this statement: the UTEP defensive unit in 2014 will be greatly improved not only in basic tacking, but in the pass rush world as well.

Remember this date, I will own it if the defense is again struggling, but based off what I have seen in the spring and in the small glimpses this camp, the UTEP defense will surprise some folks this year.

The obvious reason for improvement as I have noted before, as has almost every defensive involved member of the team has noted is the continuity, and familiarity gap that was closed now being in year two of the 4-2-5 implement.

UTEP had 13 total sacks in 2013, while their opponents had 26 against them which certainly has to flip flop if any win column improvement dreams are made true. 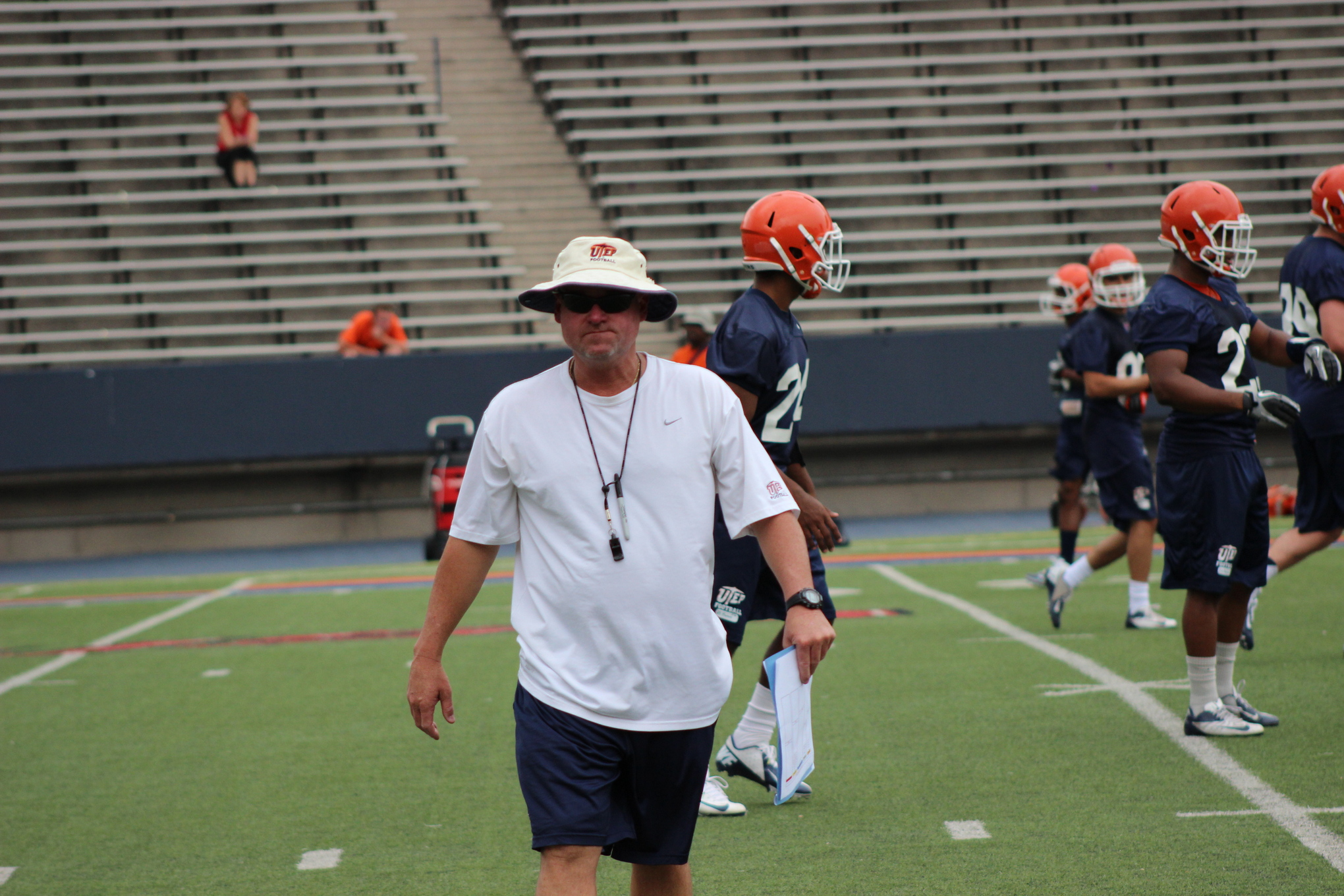 Like any defensive scheme pass rush is a 4-2-5 defense's best friend, it leads to turnovers, and feeds into possible exotic/unique defensive looks that make it difficult for an offense to stay in a rhythm when going up against a 4-2-5..

But there is more to just knowing where to line up, and what your job is, here are three reasons why this defense will be an improved unit in 2014:

The junior defensive end looks leaner, quicker, and will definitely improve on his three and a half sacks he posted last year in his first year as a primary starter.

To me Robertson has NFL prospect written all-over him.

He is now a legit 6'7, late in 2013 he learned how to use his length and size to disrupt passing rhythms off the edge, mix that in with his natural speed and strength will lead to his next step in producing more stats behind the line of scrimmage on a consistent basis.

Robertson has had a solid first week and a half of camp according to coach Sean Kugler, his improvement will also groom the players around him. In the Miners first scrimmage of camp, the defense piled up six total sacks, with freshman Luke Elsner garnering a quote of positivity from coach Kugler.

Nick Usher, Gino Bresolin, and Maurice Chavis will all be starters along with Robertson in the trenches, this young group has shown potential in camp, but production has to come from a few of these four once lights flip on for UTEP to improve its overall team pass rush.

The former 3-star Robertson is poised to have a breakout year that will solidify him as an impact, and star defensive player for UTEP which is greatly needed for the defense to have any type of positive success in 2014.

The cohesiveness along the defensive front will improve with game planning and game reps, Roy Robertson will be a huge part of that and will also be a stat monster for the next two years, just watch.

Depth, speed, energy, and presence is what can made out of the linebackers from the first week of camp, even going back to the spring. 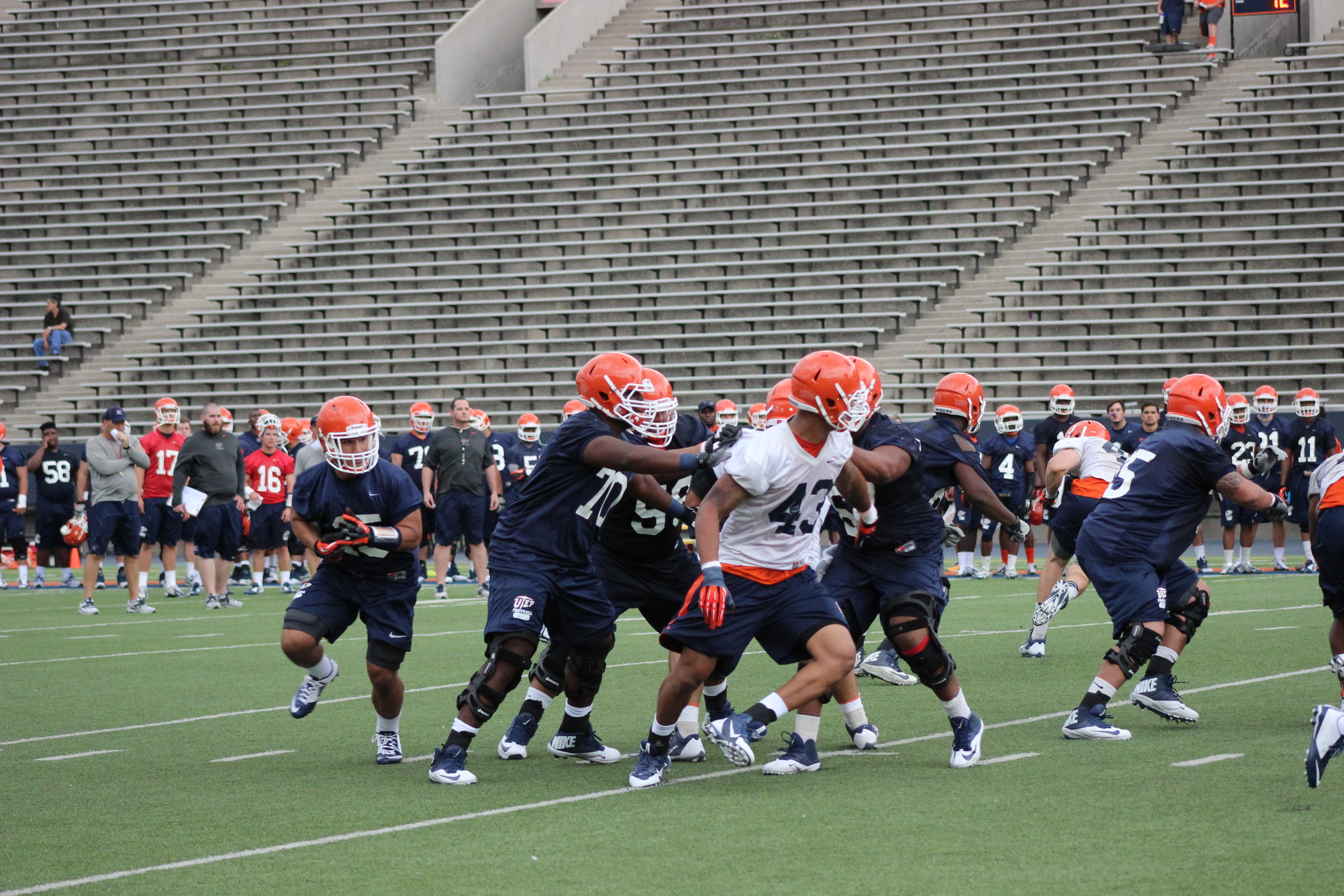 Trey Brown, Alvin Jones, and Jimmy Musgrave have emerged as interchangeable parts along side veteran starter Anthony Puente as another reason UTEP will get after it more on defense this year.

Defensive coordinator Scott Stoker should have plenty of interesting packages in pass rush situations in which the linebackers can either drop in coverage, or pin their ears back in a rush, which will generate pass rush from a number of options around the defense depending on the particular call, down, and situation.

Brown has shown to be the most athletic of the group, though Musgrave and Jones have shown almost identically the same speed and agility on pass rush, and coverage.

Puente is savvy, and has improved his physicality and tackling techniques, giving UTEP four starter capable pieces to work with in the middle for 2014.

Either way the final rotation falls from camp competition, all these guys show a good understanding of the small details of the defense, and have done what needs to be done from a linebacker in the 4-2-5 through the spring and camp which is fly and be around the ball, while also being able to play in space.

From what I have seen, each guy has the capability of getting into the backfield on any given call, its about executing that call from your technique, to your assignment, something that will be a huge mark of improvement from the line backing core in 2014.

The improvement of this group gives UTEP more flexibility in its blitz packages, and calls, it would not be surprising if a linebacker lead UTEP in QB hurries and sacks this year.

Last season when UTEP was as it lowest on defense, so many key parts were missing from the secondary, no matter how much of the system the remaining players had learned to that point, its hard to make something work when your missing huge working parts.

As a healthy, and more experienced group, the secondary will play a huge part in my declaration of improved pass rush in 2014.

With the addition for Kelvin Fisher Jr., and Damian Payne, the Miners now have a proven stable of bodies to mix in on certain packages.

Jameel Erving made huge strides at times late last year as a starter,  him along with Wesley Miller, Devin Cockrell, and corners Adrian James and Traun Roberson give UTEP some veteran and proven weapons in the secondary.

Who will step up and become productive in turnovers, tackles, and even sacks is the bigger question as guys like Leon Hayes, Robert Spencer, LaQuintus Dowell at safety, and Nick Gathrite at corner give UTEP quality options in reserve capacities.

The best learning curve for a lot of the young defensive backs last year was to be thrown into the struggle of a 2-10 season, and a near bottom ranking of all defensive stats.  That hunger, and embarrassment is not talked about aloud among the team, but you know that fire is burning within.

During the first few practices, you could sense the growing period was over as guys were flying around and making plays, Miller had four tackles and a couple of pass breakups in the Miners first scrimmage.

I also saw Miller, and Dashone Smith jump routes for huge interceptions in the first workout of the season, showing aggressive cover schemes something that was absent a year ago in pass coverage.

Not only can this group create coverage sacks with some improved cover speed from returners who saw significant playing time a year ago, the exotic blitz nature of the 4-2-5 could also lead to some tackles behind the line of scrimmage from the speed UTEP has in its possession this season in the secondary.

Due to the injury bug last year, I think it was difficult for Scott Stoker to make certain calls due to the lack of depth that plagued the secondary and almost entire the defense in 2013.

Although in 2014 as long as everyone is healthy, the 4-2-5 could finally be an effective weapon in the optimistic hopes of an overall team and win improvement in 2014.