The 2014 season brings optimism as bright as the El Paso sunshine. Buzz is brewing about a UTEP program that can take the next step in year two under Head Coach Sean Kugler. Here are 3 reasons why the Miners will be a Conference USA contender.

Share All sharing options for: 2014: Rise of the Miners 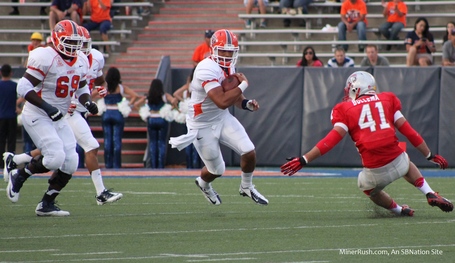 I know, I know. When the name Jameill Showers comes up, the first thing people think of is the former 3-star quarterback in-waiting behind Ryan Tannehill at Texas A&M. With a sudden plot twist occurring in 2012, he rarely saw the field thanks to one Johnny Heisman or Football if you'd prefer...

After this season, you will remember Showers for not only his playmaking ability but his leadership that will take the Miners to the top of Conference USA.

Showers had a solid statistical start to the 2013 season throwing for 1,263 yards, 11 touchdowns and 4 interceptions in 7 games. Nearing the end of October, the only thing more banged up than the Miners' 1-6 record was Showers' shoulder; which he separated against Rice. The injury cost him the rest of his Junior season and left a sour taste in El Paso.

That was soooo last season!

UTEP will be armed with studs at running back in Nathan Jeffery and Aaron Jones (Freshman All-American in some publications) that combined for 1,343 yards and 9 touchdowns. Look for a productive running game to take the pressure off Showers, allowing him to spread the ball around.

Losing a top weapon like Jordan Leslie (Transferring to BYU for his senior season) who lead the Miners in every statistical receiving category in 2013 will most certainly effect the offense. The beauty of football is the "next man up" mentality when someone gets injured or leaves the program. Keep an eye out on the big target Ian Hamilton who finished second on the team in receiving yards. Returning 2013 All C-USA Honorable Mention tight end Eric Tomlinson will most certainly help, especially in the red zone.

Ultimately, #1 on the field will have to stay healthy and consistent if the Miners want to finish #1 in the standings. 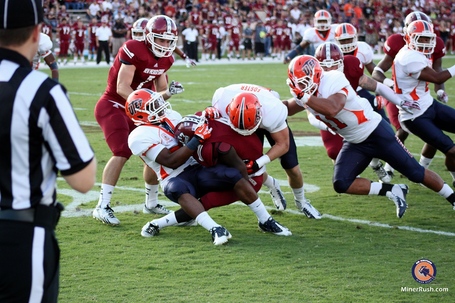 2013 was a year to quickly forget for the Miner defense. A unit that finished in the bottom 20 in the NCAA in total defense, 118th in sacks with 13, and bottom three in team tackles for loss.

Not the whole factor of course, but a footnote to be made is that Defensive Coordinator Scott Stoker was hired during the summer of the 2013 season; meaning he had just weeks to install his defense before the season opener. With no spring ball and limited time in the summer months, this UTEP unit was learning on the fly all season long. Now armed with a full season and spring ball session under their belts, this unit should improve on last year's numbers.

One key asset to running a 4-2-5 defense is putting more players with speed on the field. A 5-man secondary makes it easier to cover spread offenses and cover receivers in vacant spaces. Evidence of this is backed by UTEP's top tacklers last season, both who were two freshman defensive backs in Devin Cockrell and Dashone Smith.

Another great thing about the 4-2-5 defense is the ability to use a base front to run or disguise blitzes. With more players gaining familiarity in Stoker's schemes, expect heavy pressure coming from the edge. The speed of the UTEP defensive backs will be fully utilized in year two, making the Miners a vastly improved unit in 2014.

#MinerStrong gets stronger in year two under Coach Kugler 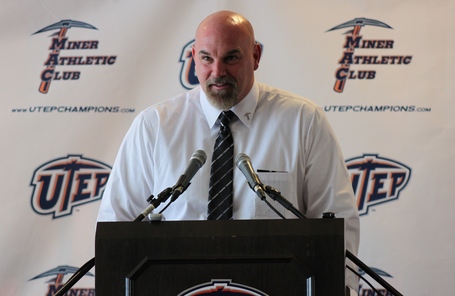 Traditionally, teams with new coaching staffs make the biggest leap in growth and improvement from year one to year two. Another season under Coach Kugler means more time for the players to get to know his coaching style, philosophy, and schemes. Let's not forget, Kugler was a position coach on the Pittsburgh Steelers when they made a trip to Super Bowl XLV before coming to UTEP.  Before that, Kugler guided the 2006 BCS-busting Boise State Broncos as an Assistant Head Coach to an undefeated season. Which included beating an Oklahoma team in the Fiesta Bowl, a moment that many college football fans and historians call the greatest football game ever played.

Kugler not only has the experience but can be a great evaluator of talent. Being a former UTEP standout and playing in the 1988 Independence Bowl helps lend experience to recruiting and his overall knowledge of the football landscape in El Paso. He knows what it takes to win at UTEP.

It's been 4 years since UTEP went bowling. 14 years since the last conference title. 2014 can be the year it all changes.