March Madness is finally here, and the Conference USA tournament is just a few days away. Have a look at how the men's bracket shaped up.

It was a wild year in Conference USA. Four teams tied for first in the league at 13-3, and the only thing keeping this thing from being a five way tie was a desperation three from FAU's Marquan Botley back on February 13th.

Southern Miss, who most expected to be the top team in the league, had a mid-season stumble and despite being one of the four tied at the top found themselves in the fourth spot. Newcomer Louisiana Tech won their second straight conference title (or share of), and earned the top seed in the tourney.

Middle Tennessee held form from last year's 26 win term, and followed that up with 23, a tie for first place, and a 3 seed in the tournament. And Tulsa, perhaps the biggest surprise of the year, finished the season with 8 straight wins to also earn a tie at the top, and become the number 2 seed.

UTEP, of course, finished 5th, with newcomer Old Dominion checking in 6th, and Tulane, UAB, Charlotte, and North Texas filing in behind them. FIU finished just behind Charlotte, but is currently serving a one year postseason ban due to poor academic performance. FAU, ECU, UTSA, Marshall, and Rice rounded out the league.

Of course, the conference tournament will begin Tuesday at 3:30 p.m. MT, with (10) North Texas taking on (15) Rice. It will continue through Saturday, with the semifinal games on Friday being televised on CBS Sports Network, and the Championship game Saturday morning being carried by CBS.

Here is a complete look at the Conference USA tournament bracket: 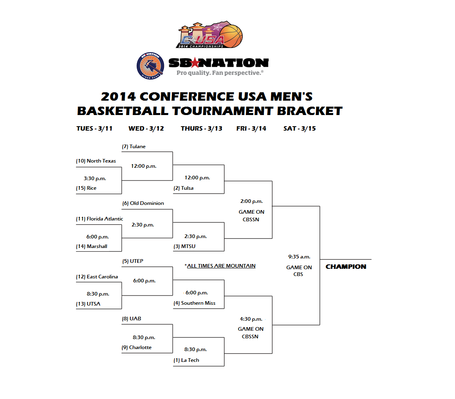 How do you think things will play out?

Make sure to stay tuned to MinerRush for in depth coverage of the Conference USA tournament, as well as all things UTEP sports. Also, make sure to Follow @sbnminerrush on Twitter and as always don't forget to like our Facebook Page. Picks Up, and Go Miners!