A glorified practice turned into a show worth the price of a regular season ticket.

Share All sharing options for: Orange and White Scrimmage: White Triumphs Over Orange In Wild Finish

The Orange team jumped out to a 41-24 halftime lead, but the White team led by Omega Harris, Lew Stallworth and Vince Hunter furiously fought back in the final 14 minutes of the game to escape a triple overtime thriller with a 77-75 win in the Don Haskins Center.

Cedrick Lang charged an early 14-2 run for the Orange who took a 24-8 lead halfway through the first half.

Lang would finish with 15 first half points, as the Orange shot 64.3 percent in the first frame, and out rebounded the White 21-11 while taking the huge first half lead.

The Orange would hold their steady lead and stretch it out to 21 at 48-27 with 14:47 left in the second half, until the White made their move after a Vince Hunter layup, foul and free throw to cut the lead to ten with 7:53 left in the half.

Over the next five minutes, the White would outscore the Orange 16-9 after Vince Hunter cut the lead down to 62-59 with 2:27 left to play thanks another three point play.

With the White down two, Lew Stallworth tied things up at 64 with a twisting, tough layup, leaving the Orange with 14 seconds to win.

Julian Washburn missed a jumper from the left elbow as time expired, and Tim Floyd called for a one minute overtime period.

Omega Harris drilled a trifecta that gave the White a lead, but the Orange answered once again after a Matt Willms layup gave them a one point lead.

Harris would miss a fade away jumper with less than five seconds left and still trailing by one, though the zebras whistled a loose ball foul on Cedrick Lang, sending Vince Hunter to the line for a pair.

Hunter split the pair, and once again CTF called for another one minute overtime on the brand new beautiful video boards.

After a pair of C.J. Cooper free throws put the Orange up 73-70 with 13.1 seconds in the second overtime, Earvin Morris sank a fall away miracle three pointer to tie things up with three tenths of second left, sending the scrimmage into another overtime.

Julian Washburn would tie things up in the third overtime frame at 75, though Terry Winn would muscle his way to free throw line with point eight seconds left.

The freshman buried both tries, and a hailmary heave pass to Matt Willms ended with Willms missing a tough look at a seven footer to end the game.

Lang would finish 12 out 15 from the field, scoring 30 points to go along with 13 rebounds for the Orange.

Omega Harris scored 16 second half points to finish with 22 points for the game, he also shot 4/7 from the three point line.  Vince Hunter was his aggressive self, pouring in 25 points, adding 15 rebounds for the White who outrebounded the Orange 26-20 in the second half charge.

Juliian Washburn had a very efficient offensive day, chipping in with 21 points, and a 4 of 5 shooting performance from the behind the three point line, Matt Willms scored 11 points and grabbed 12 boards for the Orange.

One of the biggest questions was how would the young guards fare, and they left no questions of what is to come.

Lew Stallwoth scored 9 points, and dished out 7 assists with just one turnover, and did an excellent job of getting the White into an offensive rhythm in the second half.   Earvin Morris scored 13 of his 15 points in the second half surge though missed a few wide open looks and was 5/15 from the field.

Overall a great competitive workout, showing fans the potential for something special this year, though work still remains.

Combined the Miners shot 19 out of 39 from the free throw line, and after the scrimmage coach Floyd wasn't too happy with the interior defense.

What will make the coach happy is the high effort, high energy both sides showed, giving the coach some good film to break down over the rest of the weekend. 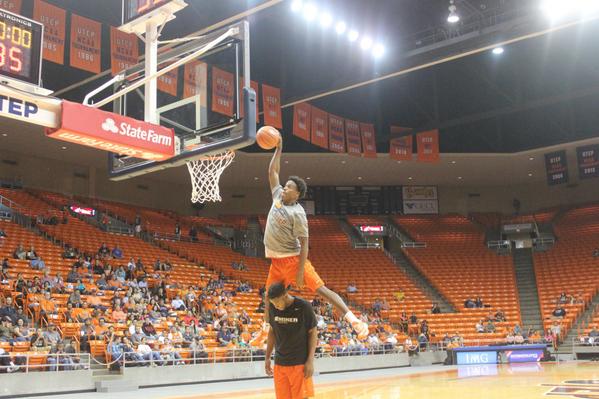