Jay Mattox was the real MVP, but so was the deep rotation, dominant defense.

Share All sharing options for: Beyond The Box Score: Dominant Defense, New Hope On Special Teams

That is the only way I can describe what transpired last night on the soft, plush turf of the Alamodome.

Using seven straight three and outs in just under two minutes each dominate defensive series, the UTEP defense finally broke through in taking over a game at the line of scrimmage, while pitching an eye opening shutout in the process.

We had seen glimpses of "hey this defense can be pretty good", but when Jimmy Musgrave housed a 19 yard pick six on what looked liked a UTSA quick screen, the UTEP defense under Scott Stoker did what Scott Stoker's defense's are supposed to do: create absolute havoc.

"It feels really good. They embarrassed us last year and we had to return the favor."

There were no gimmicks, wrinkles or anything special, just guys getting after it upfront, opening up safeties on creative blitzes which are keys of Stoker's blitz heavy defense.

After the dust settled, UTSA had 70 yards of total offense, two first downs, and out of their 14 total drives, UTSA's longest time of possession was 2:40 gaining just 13 yards when most UTSA fans were already pulling into their driveways.  And like UTEP coming into the game the Runners had a high TOP average.

The tone was set on the first UTSA offensive drive.

On a third and six, Dashone Smith came off the left edge of a perfectly designed and executed blitz, and planted Austin Robinson into a incomplete pass.  I called for it during the week, and Smith delivered on that play.

UTEP just needed to smack him around early, and his inexperience and the struggles of the UTSA offense would show in a heartbeat once the first oh and awe hit was laid.

One could argue that UTSA is down to their third string quarterback, that the Runners have had some struggles on the offensive line and on offense period in 2014.

But isn't a legit defense supposed to expose that?

Well UTEP's dominate defensive output last night didn't allow more than 17 yards on drives, so call it what you wanna, but the UTEP defense took an 100 yard leap into being a consistent force.

So many guys had career nights in a total group effort.

Nick Gathrite forced two fumbles and had a TFL, Devin Cockrell, Silas Firstley, and Jameel Erving all had the first sacks of their careers, Smith had two QB hurries, and a huge TFL around UTSA's own goal line which wasn't officially recorded.

The secondary used their speed and size in taking UTSA's FCS looking receivers out of the game, and man that defense was out there here hitting.

I walked down onto the field during the middle of the third quarter passing by the UTSA offense line; those guys were quiet looking totally shell-shocked in what was taking place, mind you that group averages 33 career starts across the board.

"I've been around some really good defenses in a lot of places, and that might be the best defensive effort I've seen. UTSA had two first downs and 70 total yards. There was some hitting going on and there was some energy. I could see it during pregame. I could tell our guys were ready to go and it was so exciting to see because Coach (Scott) Stoker and his staff have done an unbelievable job with these guys from a standpoint of changing their fundamentals. These guys are tackling and depending on each other. They understand the scheme now. I'm just so happy for those guys."

One of the best gang tackling performances from a UTEP defense since I was old enough to judge those type of things, and a masterful game plan from Scott Stoker in which receiver Ian Hamilton told me after the game that Stoker put in blitzes over the bye week that no one had seen before.

When asked if he had ever been apart or seen a thorough dominate defensive whippin like yesterday's Jimmy Musgrave replied, "never".  Its all good Jimmy UTEP fans hadn't either.

The MVP of this game was Jay Mattox.

Practicing at punter to be the game punter for the first time Thursday, Mattox pinned UTSA inside the 10 three times, and hit a career long of 47 yards, adding in a 20 yarder for his two made field goals on the night.

I've gone in hard on Mattox before, but the kid stepped up and going forward I think he will become a nice weapon for UTEP.  Mattox was highly touted coming out of high school, and in his second year his hard work and improvement he is showing is great to see.

" When I came to UTEP I did a couple of roll out punts my freshman year at camp, but besides that I haven't really punted."

On if it was a little scary ..

"To be honest it pretty nerve wracking, but you have to go out there and do your job. I had some great blockers out there for me, so that helped calm me down.  The more you do it, the more confidence you get. It was just cool going out there and the first punt was a little scary. I caught it and kicked it and did my job. I didn't think about the field position, I just thought about getting the ball off."

One of the smartest moves of the season was to put the rugby style punts of Mattox back there to fix the protection issues.

Robert Rodriguez, and Brian Natkin deserve some huge credit too as does the whole entire staff for a solid game plan.

Kudos also goes to Damian Payne as well for his 16 yard punt return, Payne had a 19 yarder against Old Dominion and is starting to become a field position weapon back there as well.  After that return it looked like UTSA was skying it to keep Payne from wiggling around.

Going forward this team is rolling, back-to-back conference wins since 2010, breaking defensive records that date back to the 60's, and shutting out a team on the road.

This team could be a very special one in UTEP history, no reason there shouldn't be less than 40k next weekend as UTEP inches closer to shining those bowling shoes.

Gameballs: Jay Mattox and the Defense 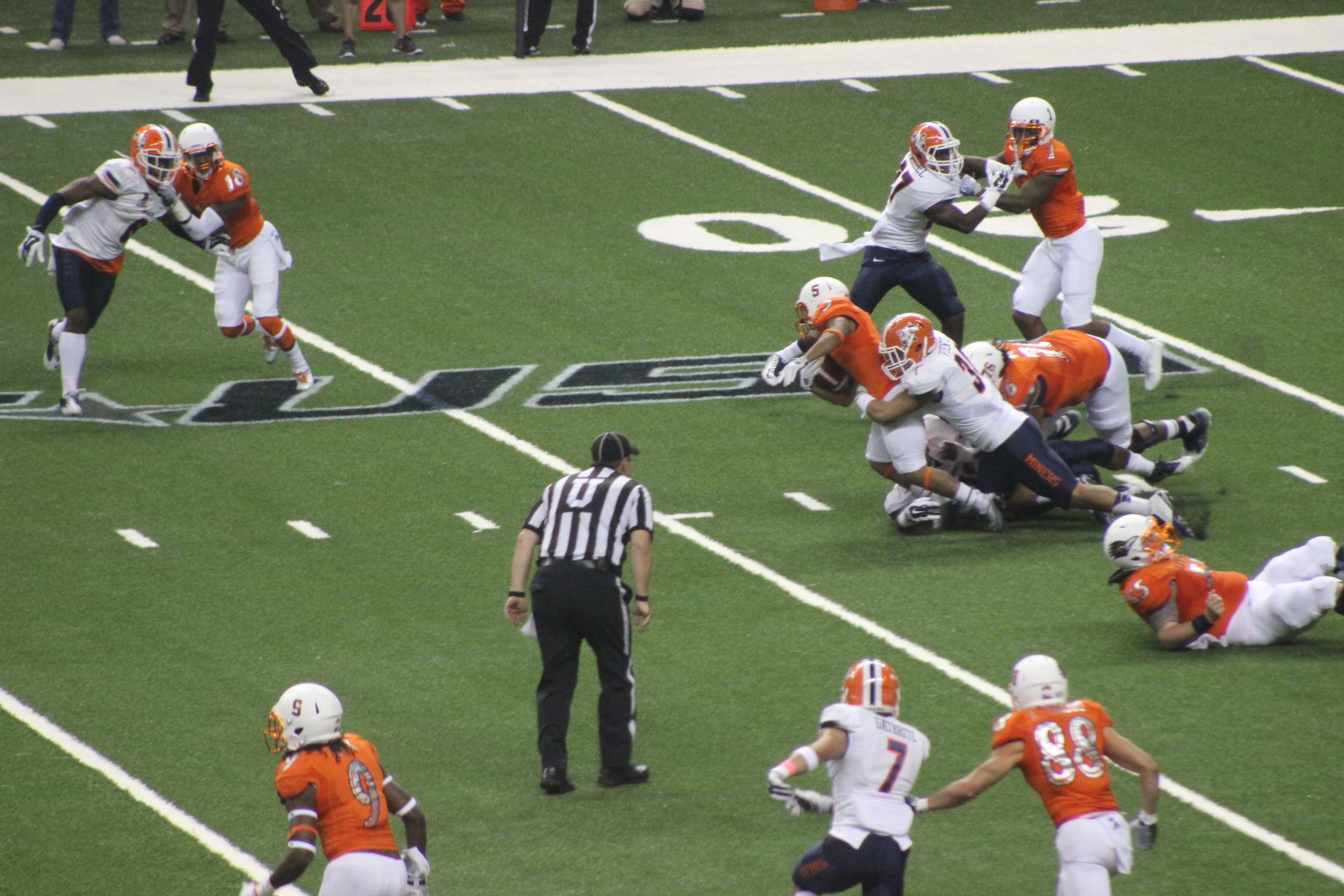 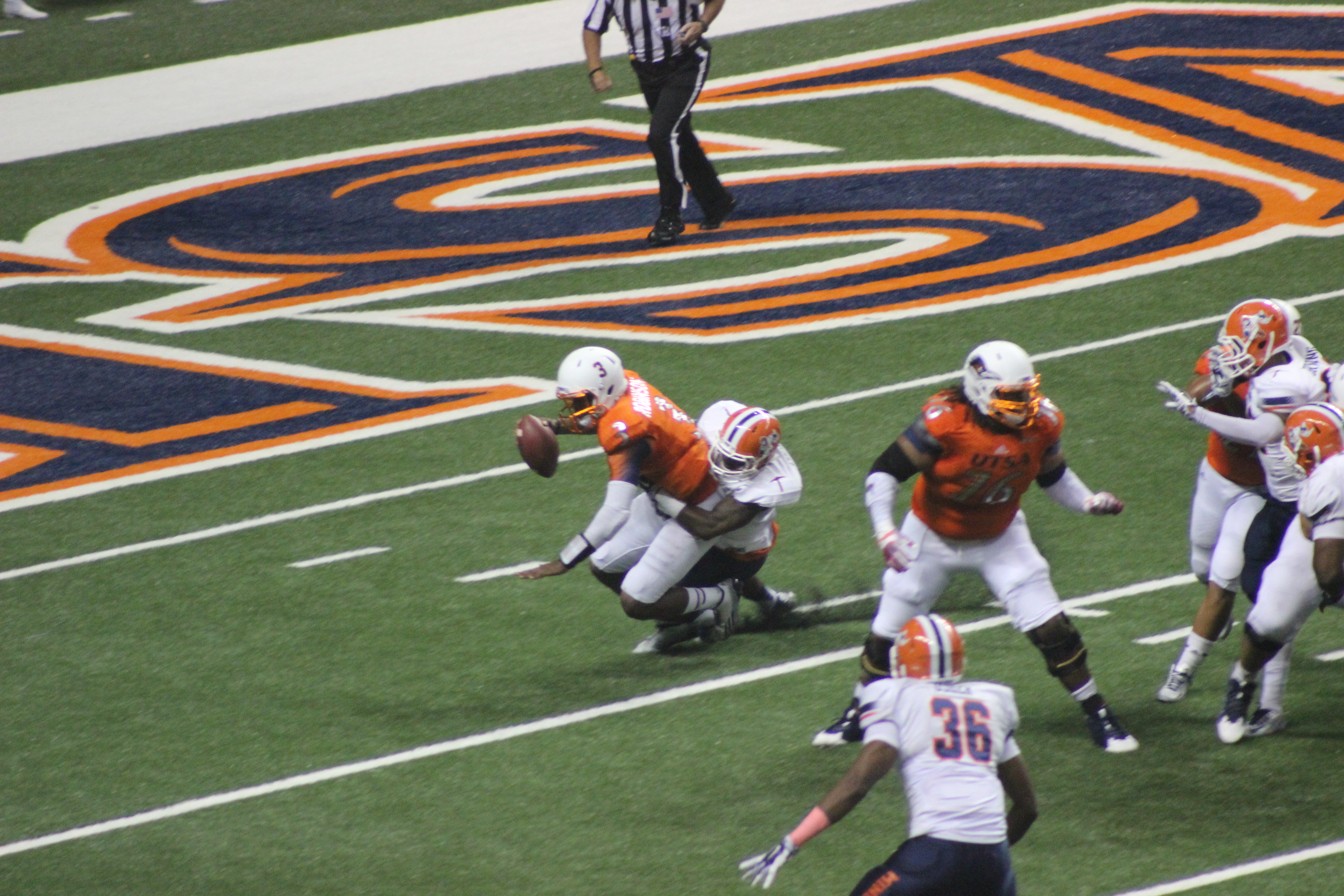