Got a chance to stop by UTEP basketball practice before my trip to San Antonio for the UTSA game, saw some great things and talked with CTF and some players.

It was a fast paced, full court, fierce five on five full court drill where UTEP was working on a defensive coverage, but one could take away tons of info from the intense start to practice the other day.

First impressions of seeing Lew Stallworth was the biggest takeaway of the day.

Stallworth is built like a rock, with great quickness, and sharp handles that had no problem getting UTEP into offense coming down court during the full throttle 5 v 5 session.

He got to the rack once from his left, though missed the layup, but showed the strength and speed needed for a PG to be productive in CTF's system.  Stallworth and Omega Harris behind or with C.J. Cooper is something special UTEP has its disposal this season at point guard.

Another standout point was the cutting ability of Terry Winn without the ball.

Winn is a physical specimen of an athlete, and dove hard while receiving a pass and laid it up with ease among two veterans hawking the rim.  Winn drew high praise from assistant coach Phil Johnson who said that was an excellent cut from a freshman.

The fact he took the correct cutting lane at full speed and was able to finish was very promising because it was against Cedrick Lang and Hooper Vint who played it well, Winn just made a great play.

Earvin Morris can flat out shoot the ball.

One of his biggest moments of the drill is when he dialed up a 22-footer from close to top of the key with Hooper Vint all in his face, and like the kids say in pickup games: eyeballs as Morris hit all net.  Morris made 2 out of 3 at one point, very smooth jumper with high confidence from anywhere.  Morris also drilled another one of those from close or right at NBA range.

Not only can Morris shoot it, Omega Harris drilled two deep treys in a row during the drill.

To me I think when Omega and Morris are in the back court that could be CTF's "scoring" lineup because those guys are versatile scorers who can also shoot from anywhere.

'Julian Washburn showed some aggressiveness on a drive to rack with his left, and of course was relentless on defense as always.  The other veterans looked sharp, lots of competition out there and the vets are responding very well to high level of play during my times at practice.

Vince Hunter looked very comfortable in the open floor as far as handles, and navigating through traffic.  He took a board coast to coast against great defense for a tough lay up, Vince looks improved and smoother in his handles and court vision with the ball and with a head full of steam.

One of the surprises to me was the improvement of Hooper Vint.

Vint looks way more agile and even made a nice aggressive move on offense for a one handed runner in the lane, defensively he and big Ced were smothering cats with quickness, and strength and of course their length.

Hooper could be a wild card to become an impact player this season with the way he was moving around out there, you can tell he sees the opportunity he is going to get to see the floor a lot this year, very impressed with where he is at right now.

Its seems Matt Willms has learned to used his length on loose balls, and on defense, though still struggles with decision making on the double team on offense, but like I mentioned Ced and Hooper were going pretty hard on defense.

I could only stay for the first 30-45 minutes, but everything was crisp and at full speed,  CTF even had to stop practice twice to tell the guys good job during the five on five drill.

You could sense the intense and very high level of competitiveness between the guys, and it wasn't a I want to take your minutes feel, but a lets get better as a team feel.

Very impressed with the high level of play and energy that has been shown in what can be the dog days of practice.

Had a chance to talk with Coach Floyd, Terry Winn, Earvin Morris, and Julian Washburn, here are the quotes.

How has the first weeks of practice gone?

"Real tough for me, it's different from high school, and prep school.  Everybody is bigger and stronger  I was always used to being the biggest and strongest in high school so its different practicing against seniors."

Talk about Floyd's defense first system, and transition of it?

"Its different for me as well, my coach last year just threw the ball out and let us play.  Coach Floyd is real set on his system so I'm having to get used to running the system everyday in practice."

What do you think are your biggest improvements physically and mentally since the start of practice?

Recovery, getting acclimated to practice everyday, and being ready for a physical practice everyday.  I just know we have to work hard, at first it was like everyday getting tired and being sore, but now I'm over that I'm used to now been going in for a week or two.

Talk about your daily competition with Cedrick Lang?

Practice with Ced everyday is crazy. I know before I go practice I'm going have a bruise afterwards. I hate holding him, but its only going to make better a perimeter and inside player.

What have you seen so far, and do you like what you have seen in the first half of practice?

I think you expect guys to really practice hard this time of the year, and they are. I really like our freshman, I think we got a good group, we're rebounding it better.  Our freshman have provided additional help in the backcourt depth wise, and probably rebounding wise. So a lot of things to like right now.

Is it too early to say you would like to go with a point guard by committee attack or would you like someone to step up and be the leader at point guard?

We just don't know.  You would like to have a star, first team all-league guy, and you go play with that guy.  But we're deeper than we have been at the point spot, and its provided a challenge for C.J. Cooper which I think he wanted, and needed it and it will only help him.  But its also going to help these other two young guys who are there. We're better at the shooting guard position, Trey Touchet can help us there, Earvin Morris can help us there, Julian Washburn can also play there, but move over to play small forward now.  A lot more versatility than we've had in the past.

Whats the biggest surprise from the first week of practice?

I think the freshman, I think they're competitive level.  Talking to Coach Johnson about it yesterday, we have been at this point of our preparation (before) and looked at each other and said we are allowing these freshman or these newcomers to kill our practice, and we're not having that right now, they are enhancing practice. Their learning curve has been better than we expected it to be, their work ethnic has been better, and I think their learning curve in terms of knowing what we are trying to do has been much better.  So we have been very pleased.

Did you learn anything about the conference during media day last week?

I do learn because we're so spread out.  I have no idea what's going on in Florida or the Carolina's and I'm sure our fans don't either.  I try to ask a lot of questions and just listen, and generally what you listen to is a lot of lies. You know I probably think I did gain a couple of things, but not a lot.

What's the approach do you have planned for the next couple of weeks before the Orange and White Scrimmage?

We have to continue to move along. we haven't done anything with our zone offense, zone defense, everything has been preparing ourselves to be able to play in the half court, and now we're expanding to the full court.  We have a lot of work to cover.

What are your thoughts on the team coming together?

We're gelling pretty good.  We spent a whole summer together, so we got to know each other, we got to play a lot over the summer, I feel like we're coming along pretty well in practice.

How comfortable are you in the offensive system?

I'm actually very comfortable with the system.  I'm really good at adapting and learning plays, leaving one school going to another its a lot of different stuff and then coming here.  I'm actually pretty good on picking up on stuff and learning new stuff.

Any anxiety to get on the floor for the Orange and Scrimmage?

Yeah it is.  Looking forward to it to really see what we're looking like,  just want to see how play together with a crowd and officials on the court.

Whats your approach in keeping the young guys mind's right over the next two weeks with a "game" coming up on the horizon in two weeks?

I really try to lead by example by just keep going hard in practice.  I'm trying to show them that playing time is not guaranteed, in order to play you have to go hard in practice and I feel like for the most part everybody has been playing pretty hard so far.

Do you feel everyone is up to speed on the defensive principles yall went hard on in the first week?

Talking about your senior year and you being a senior leader?

I feel like I've been here forever.  I'm sad its my senior year, but you know I'm just ready.  I really want to go to the tournament, but I'm going end with a bang.  Going to the tournament is the main focus right now, and I feel like we have the team to do it.

Talk about the early schedule and opening up with Washington State, and New Mexico State?

To be honest I feel like that's better.   Sometimes I feel like when you start with an easy team the first game you kind of play down to your competition, and I feel bringing in a team like Washington State for the first game we really have to play our best. 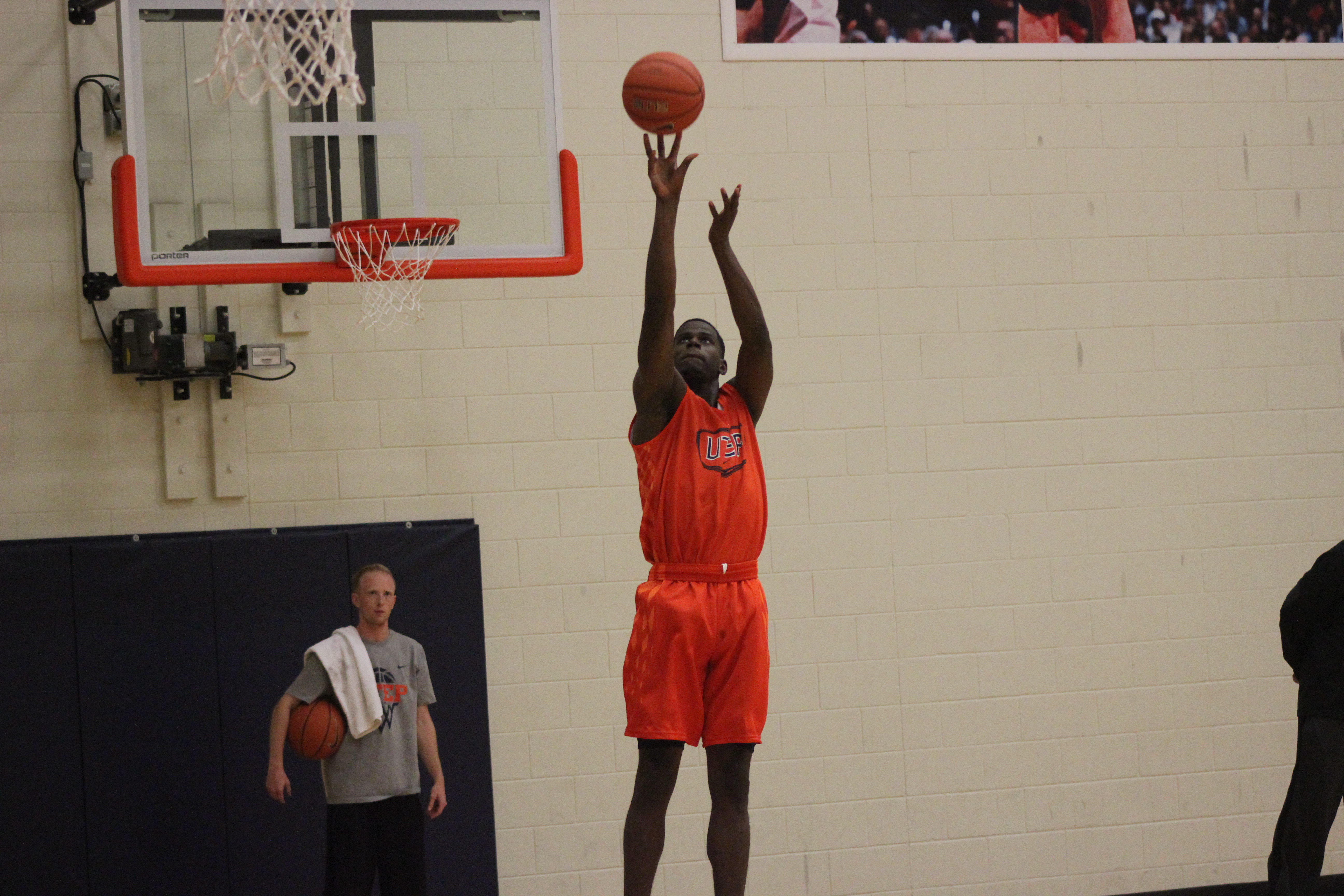 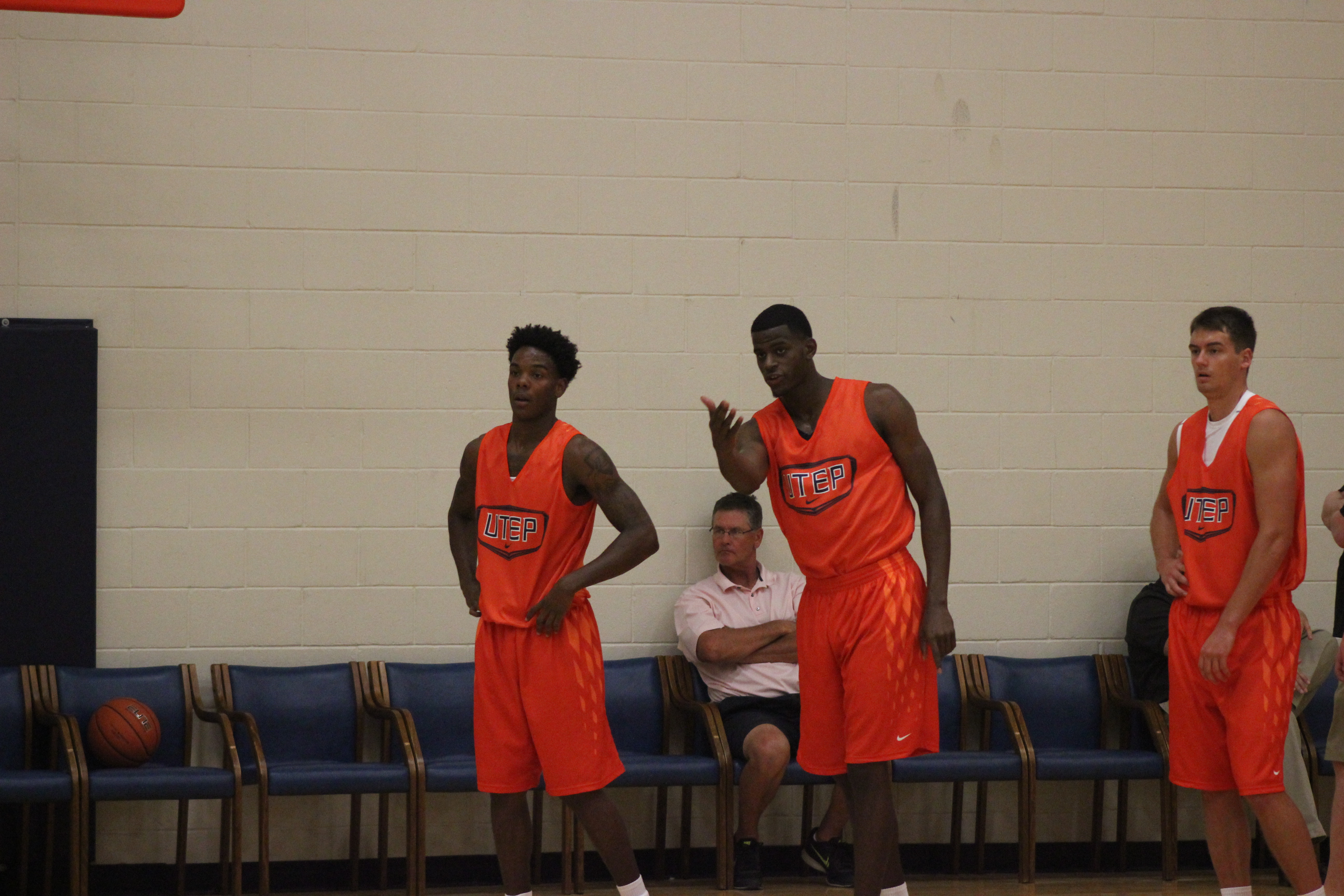 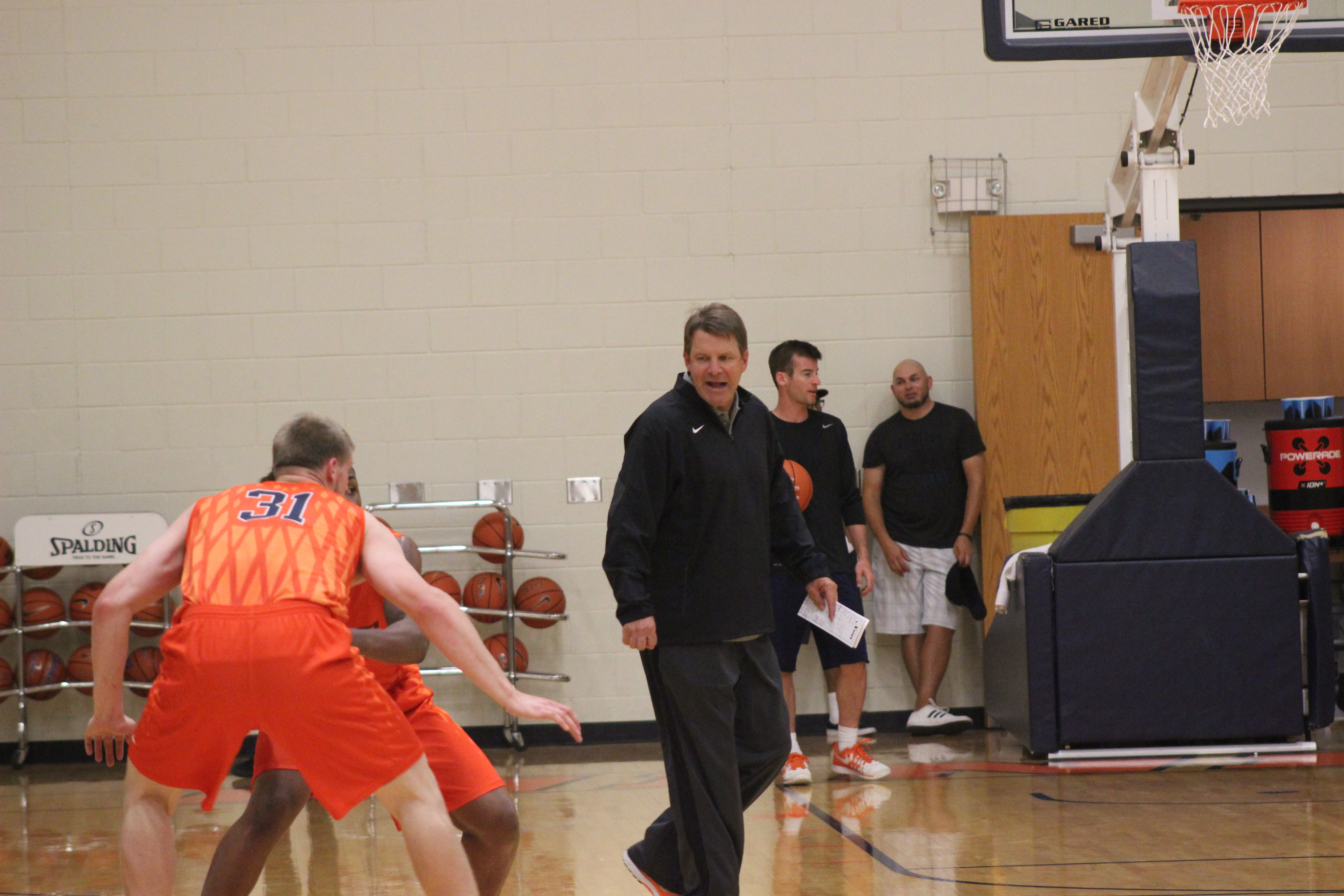 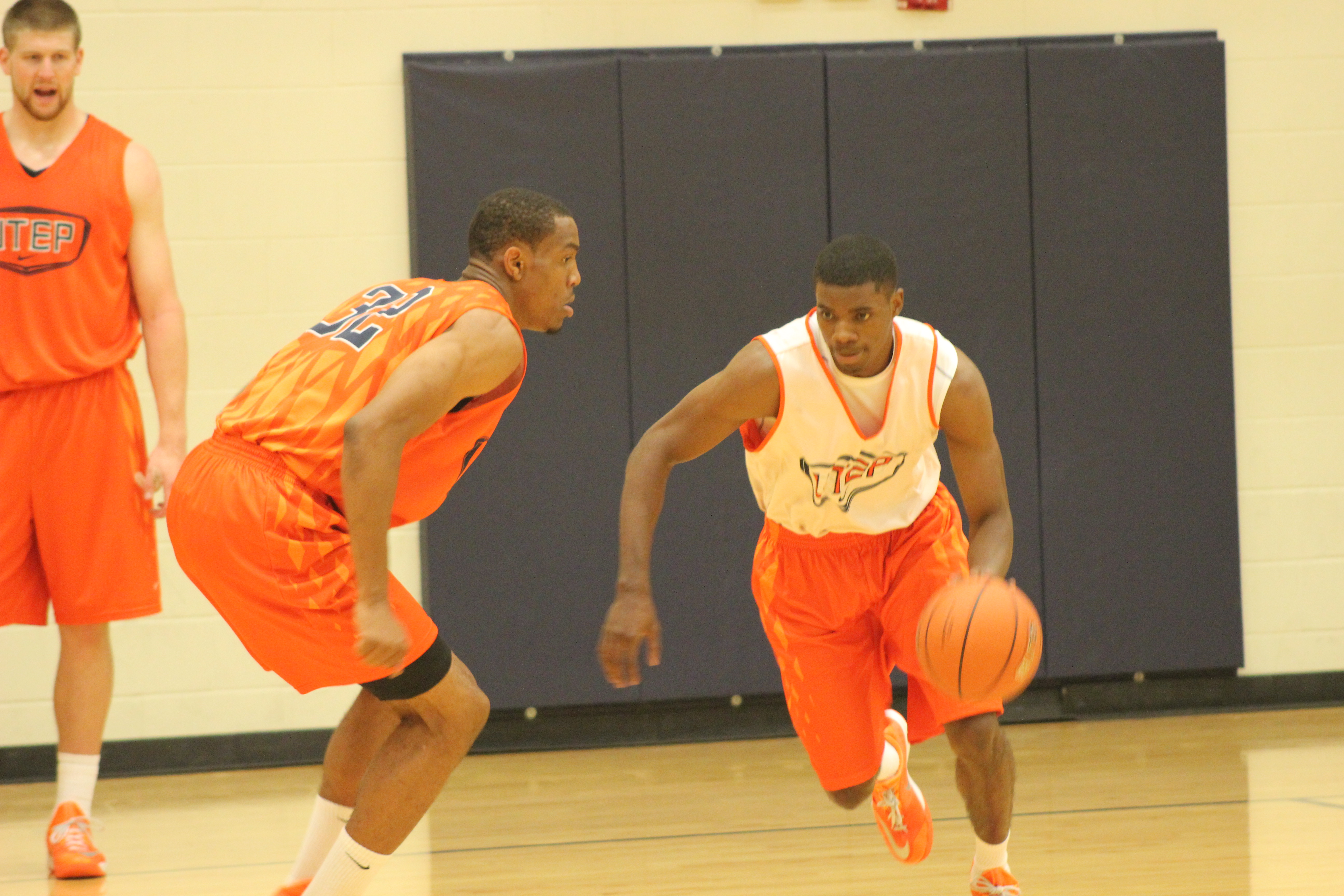 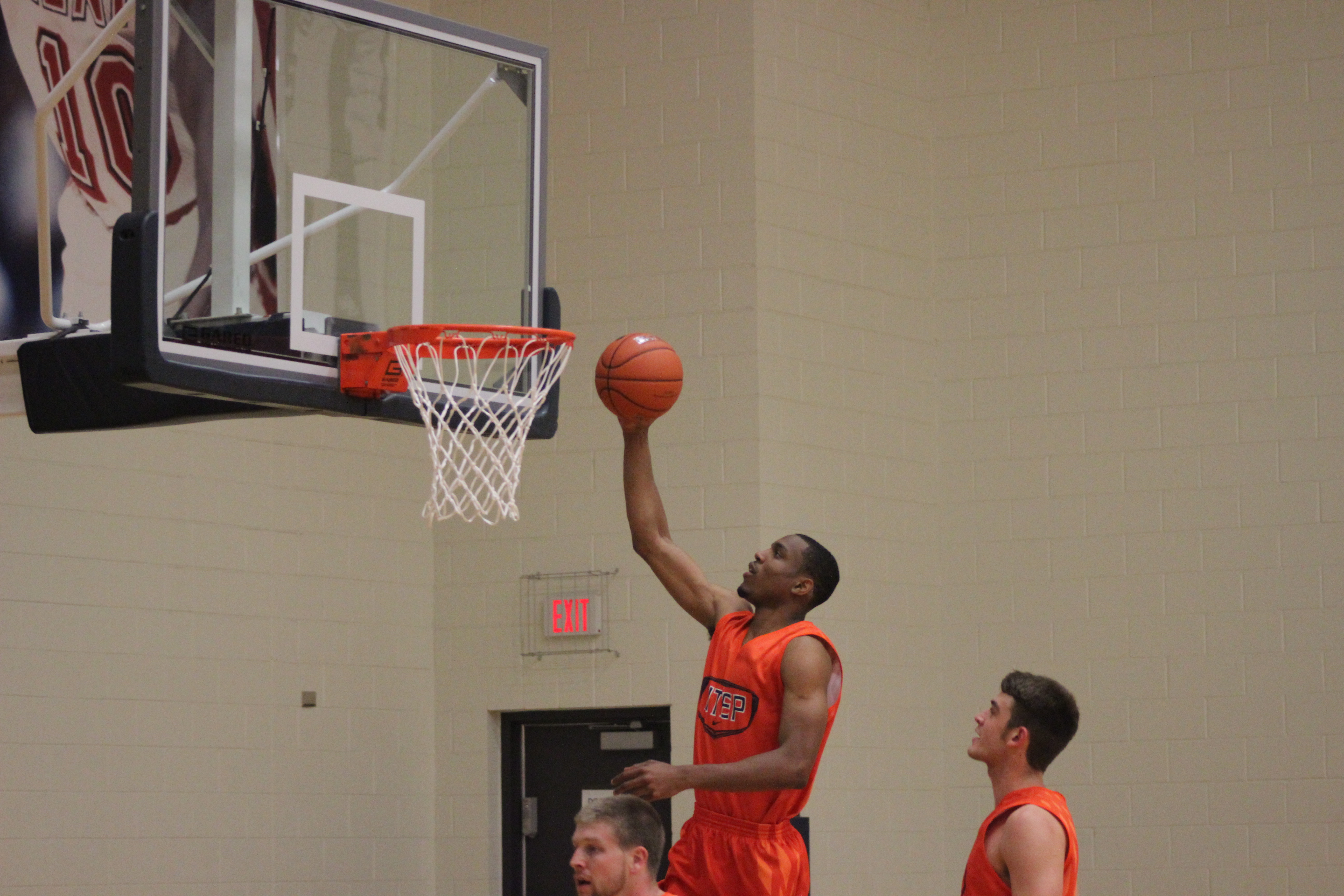