Day 3 gives us the final 4 teams of the CUSA tournament hungry for that title and the automatic bid to the NCAA tournament.

We are currently on the third day of the CUSA Tournament at the BOK Center in Tulsa, Oklahoma. Day 1 had very close games that could have gone to either team and Day 2 was the complete opposite with all the seeds winning scoring 80 + points with the exception of Tulsa (79). There is one thing that is certain for Day 3… no one can predict what tonight’s games will hold.

The first game of the night will be the 2-3 match up between the Southern Mississippi Golden Eagles and the UTEP Miners. Both teams met only once this season in Hattiesburg, Mississippi with So. Miss being the victorious team by a final of 45 to 39. That game saw possibly the worst offensive output by both squads, that or a brilliant defensive effort. I have a feeling that tonight’s game will have more fire power and will be somewhat like the UTEP-Houston game (Tough Offense vs. Tough Defense). Southern Mississippi is led by Dwayne Davis who averages 16.1 points per game with 4.4 rebounds. Jerrold Brooks also provides some fire power for the Golden Eagles averaging 10.6 points per game. The Miners are led by Julian Washburn who averages 12.2 points per game with 4.2 rebounds as well. Junior John Bohannon and Konner Tucker both average double digit scoring (10.5 and 10.3 respectively).

The second and final game of the night will be the 1-5 match up between the Memphis Tigers and the Tulsa Golden Hurricane. Both teams met only once this season, with Memphis winning by a final of 94-64. Tulsa won last night vs. East Carolina after the Pirates became decimated in the final minute with costly turnovers and poor ball handling. The Tigers are led by Joe Jackson who is the CUSA player of the year. Jackson averages 13.8 points per game with 4.9 assists. Adonis Thomas averages 11.7 points with 4.5 rebounds a game. The Golden Hurricane look to Scottie Haralson who averages 10.8 points per game and is the only senior on this team. Pat Swilling, Jr. also helps with 10.7 points per game with 2.3 rebounds.

The winner of the Southern Mississippi-UTEP game will face the winner of the Memphis-Tulsa game tomorrow morning for the Conference USA title. This is a wild and unpredictable CUSA tournament, but hey we love our March Madness. 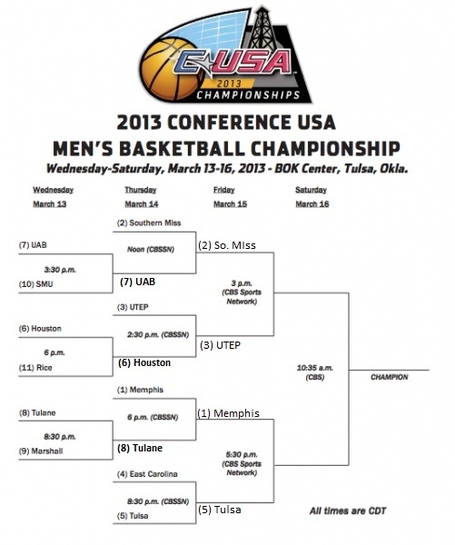