The Conference USA tournament kicks off tomorrow afternoon in Tulsa, Oklahoma at the BOK Center.

The Conference USA tournament will be under way starting tomorrow at the BOK Center in Tulsa, Oklahoma. Five teams have already secured byes for the first round: 1. Memphis, 2. Southern Mississippi, 3. UTEP, 4. East Carolina, and 5. Tulsa. Conference USA usually only gives the byes to the teams that finish 1st-4th, but this season UCF is on a post season ban and cannot play in any post season tournament (including CUSA). There are three games on par for the opening round that we will take a look at today.

The winner of the UAB-SMU game will go on to face the # 2 seed Southern Mississippi Golden Eagles. Southern Miss went 2-0 against UAB and 1-0 against SMU. The winner of the Houston-Rice game will face the # 3 seed UTEP Miners. UTEP went 1-1 vs. Houston this season and 2-0 vs. Rice. The winner of the Tulane-Marshall game will face the # 1 seed Memphis Tigers. Memphis was 1-0 this season vs. Tulane and 2-0 this season against Marshall. The only game that has a time for Thursday as of right now is the 4-5 match-up between East Carolina Pirates and the host school Tulsa Golden Hurricane. The Pirates and the Hurricane will tip off at 9:30 pm ET. The bracket below is in CDT time. 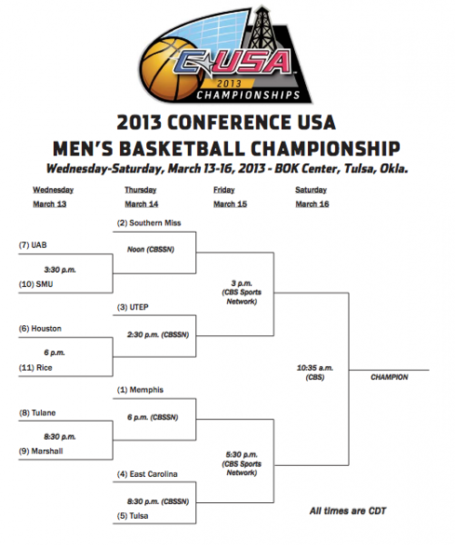