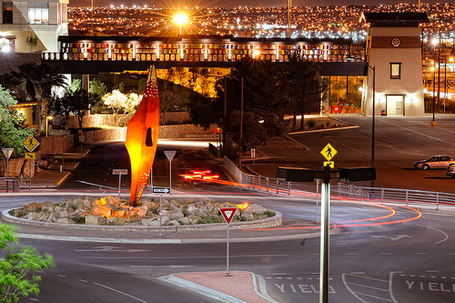 Could El Paso finally receive their much anticipated invitation to the MWC? (via Brian Wancho)

As a fan of the University of Texas at El Paso, I implore you to make the correct verdict in this time of expansion and invite our university into your conference.

Now is an opportune time to establish the Mountain West as one of the top leagues in the nation, and the readmission of San Diego St and BYU, along with the addition of UTEP would enhance the conference in athletics, and geographic presence, and would create a rivalry with the PAC 12 for supremacy in the West.

The first and obvious reason that UTEP should be invited is for geographic sensibility. With one look at a map of the United States, you might ask yourself why UTEP is not already part of the MWC.

Every school in the conference would lie either in the Mountain Time Zone or the Pacific Time Zone, leaving no school out of place. This a model that the PAC 12 has followed very successfully for decades now.

Rivalries would instantly be rekindled as UTEP already has a history with every university in the MWC except for future member Utah St. UTEP competed alongside BYU, UNM, Wyoming and Colorado St in the Old WAC for over 32 years.

We were there when San Diego St, Hawaii and Air Force got invited to the WAC and competed against them for over 20 years. We also played alongside UNLV, Fresno St, San Jose St, Nevada, and Boise St for a few years in the WAC as well.

Right now the allure to chase after Houston, SMU, and Tulsa is high but I can guarantee you that UTEP would be the better choice in the long run. With the hire of Sean Kugler we expect our football program to rise in the coming years to the same level of our Texas rivals.

Our potential is higher. Our fan base is deeper. Of what good is it to win games if you cannot fill up your stadium? Tulsa finished the season as the Liberty Bowl champions and the C-USA champions along with a shiny 11-3 record. The city of Tulsa has never got behind them as they averaged less than 20,000 for the year and only got 17,635 to show up to the C-USA championship game.

On the other hand UTEP endured one of its worst seasons in over a decade with a 3-9 record but we were still able to average a little less than 30,000 which would close to sell out seven of the current MWC stadiums. Once our football team starts winning and the Sun Bowl is packed with 50,000 loud and proud El Pason’s you’ll know the right decision was made.

Another tie, not in college athletics, but in triple A baseball is that beginning in 2014, El Paso would be the 8th MWC city competing in the Pacific Coast League of Triple A baseball.

That would create a nice bond between us and allow us to keep the rivalries alive outside of the MWC. It would be awesome to discuss baseball along with the cities of Albuquerque, Colorado Springs, Las Vegas, Reno, Logan, and Provo.

And not to mention, our team’s MLB affiliation will be with San Diego. Obviously, the last point has nothing to do with the MWC or college athletics but it does show just one more connection that UTEP and El Paso have to the other universities and cities of the Mountain West Conference. Plus, at this point I’ll say anything that can help us get in.

There's no question that the University of Texas at El Paso would be a great addition to the Mountain West Conference. It brings up and coming athletics programs, great facilities, a large T.V. market, a supportive fan base, and a history with the vast majority of the schools already in the league.

UTEP and the MWC is a match made in heaven. The additions of UTEP, BYU, and SDSU will help to build a resilient foundation of universities that are geographical neighbors, and will create an unbreakable conference.

In 1999, when the MWC was formed, it was a true disappointment to not be invited in along with multiple universities that we had shared a long and successful history with. Maybe the time for us just wasn't right.

However, in the best interest of all the universities and cities involved, and especially UTEP and El Paso, please do not disappoint us again. Send UTEP a much needed, and much deserved invitation to join you in your conference.

Who should the MWC invite?