UTEP Football: T Minus 6 Days Till the Oklahoma Sooners Come to Town

Share All sharing options for: UTEP Football: T Minus 6 Days Till the Oklahoma Sooners Come to Town

Well, gentlemen, we are six days away to UTEP's 2012 football season opener against the #4 Oklahoma Sooners at the Sun Bowl. UTEP Athletics, via Facebook, notes that some 15,000 seats remain for the 8:30 p.m. MT kickoff. The game will be televised on Fox Sports Network.

The season opener will be a tremendous test against legit Heisman candidate Landry Jones and a tenacious OU defense obviously, but I can't wait to see how UTEP's skill players look in week one. Nathan Jeffery, Nick Lamaison, Mike Edwards, and Jordan Leslie are all elite players in the C-USA ranks. What was a young offensive line last year is now more mature. Veteran's Brander Craighead (LT), Eloy Atkinson (C), and James Nelson (RT) give UTEP some leadership on the line with a lot of snaps between them. 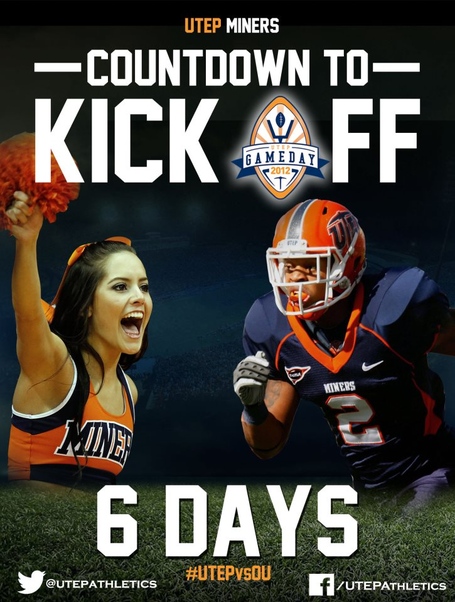 I've been a ghost around here for a long time as personal obligations have consumed me (a lot harder to write when employed and traveling as opposed to being in grad school). I will shoot to participate more and help out Asalom and the slick cast of characters he's assembled on the staff here.

I started this site to raise the level of discourse around UTEP athletics from the same boring crap we were forced to read over and over again. I think UTEP's media coverage has improved dramatically since we launched but I am so proud to look here and see so many contributors and Miner fans come here to discuss Miner athletics and share information, ideas, and thoughts.

Let's get more info up this week collectively. Let's do everything we can to raise UTEP's online presence in a positive way. Let's start this season off the right way- by not being afraid to publish stories that are thoughtful, critical (when necessary), creative, and not full of the same AP inspired mindless crap that we've been spoon fed for so long.

We are better than that. We are Miner Rush.