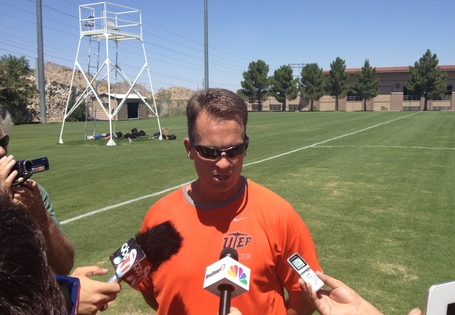 When they needed her most, UTEP turned to one of their captains to pull away with the win. And trying to avoid the Miners' first draw in their season opener under head coach Kevin Cross, senior midfielder Tess Hall stepped up with 42 seconds remaining in the game.

Hall scored from eight-yards out and UTEP defeated Utah Valley 2-1 Aug. 17 in Orem, Utah for their eighth-consecutive season-opening win.

The Miners dominated their side of the pitch the entire game, outshooting the Wolverines 30-8 and 14-3 in shots on goal, but could not find the net after a goal in the early stages of the game.

Junior midfielder Azia Nicholson scored in the 15th minute after being set up by Hall and junior defender Jade Babcock.

Shortly after the goal, Utah Valley switched goalkeepers after Lauren Sack ran into a UTEP player, according to Utah Valley. She was replaced by Jessica Duffin, who finished the game with nine saves; Sack had three.

In the 53rd minute, Natalie Baker scored the equalizer for Utah Valley in the top-left corner.

The Miners' own goalie, sophomore Sarah Dilling, finished the game with two saves, including a diving stop in the 87th minute to keep things level.

UTEP will now turn their attention to another Utah team and another 2011 conference champion team. They will make the trip from Utah Valley to the defending-WAC champion Utah State at 12 p.m. Aug. 19 in Logan, Utah.

Utah State won the WAC regular season and tournament championship and made it to the NCAA Tournament with a 15-5-2 record last season and are returning seven starters from that squad.

This is the first time the Miners are playing their season openers on the road since 2007, a first for even the seniors on the team.

"It's a little nerve-wrecking because this is my first time with my opener being on the road," senior forward Britany Kindzierski said. "We're just looking to focus on ourselves instead of saying, ‘Oh, we're going to be away from home.'"

The Aggies won their season opener against Utah 1-0 in overtime but UTEP isn't scouting their opponent, and are rather just looking to improve themselves.

"I really don't know much about Utah State, which I see as a positive, because we're looking at UTEP playing another team," Kindzierski said. "We're not looking it as, ‘Oh, we're playing Utah State.' It's UTEP going to play together, play someone else, play as a team."

The Miners will return for their home opener in the 13th-Annual Border Shootout at 7 p.m. Aug. 22 against Texas State. The will rap up that event against Army at 11 a.m. Aug. 26 at University Field.