Wednesday, after the first full day at Camp Socorro, UTEP head coach Mike Price wasn't completely thrilled with the way his team practiced. According to Price, it was ok, but the team needed to continue to get a little bit better, every single day. Of course, that's the exact purpose of this yearly voyage.

Many of these guys are still recovering from nicks and dings. Others, are barely making their way onto the roster. But today the Miners began to show that improvement, and if they can continue that through the end of camp, they should be just fine heading into the season opener on September 1st.

A major concern for the Miners, in this camp and those before, is getting players healthy, and being able to maintain that health as well. On Thursday, guys like Traun Roberson, Mike Edwards, Jordan Leslie, and Jamie Irving sat out for precautionary reasons, while senior safety Richard Spencer participated, but wore a red "no hit" jersey.

But, those who were held out of practice weren't the ones who made the biggest stories of the day. Many, especially some of the younger guys, showed some things, and truly began to earn their stripes on this Miner team. Perhaps the biggest play made, was by true freshman Nathaniel Rodriguez from right here in El Paso.

On a jump ball down the seam to 6'5 tight end Craig Wenrick, Rodriguez went up, tied up the ball in the air, and wrestled it away from Wenrick as they went to ground, claiming the interception. The play caused a roar from the defense, and even sparked some upper classmen to run out on the field to congratulate him.

Another player who showed promise, was 6'5 wide receiver Ian Hamilton. The sophomore juco transfer from Pasadena City College, who arrived on campus just weeks ago, made catch after catch, and once again showed us that deceptive speed.

True freshman quarterback Garrett Simpson, who stands all of his listed 6'6, looked far ahead of his time. While still not completely refined, in my opinion, as long as everything goes according to plan, Simpson could be the quarterback of the future for the Miners.

Although there wasn't a ton to judge him on, freshman running back Xay Williams looked great in drills. The speedy back was able to hit the open holes running, and also showed his ability to cut on a dime.

Of course though, there was plenty to be seen from the veterans of this Miner team as well. For one, Germard Reed, with his high motor, blew up a few plays in the backfield, and looked just as good as he ever has. Expect the front four of the defense to be the anchor of that unit.

The defensive secondary as whole looked much improved from a year ago, and made plenty of plays in today's practice. Even senior safety Richard Spencer, who is still getting back to full health, got in on the action in making an interception.

On offense, Nick Lamaison looked fine tuned for the most part, rarely missing his targets. Junior tight end Kevin Perry was extremely impressive. Not only do his hands and footwork seem to be better than ever, he's stronger, has put on 20 more pounds (now 270), and is still running a 4.67 40 yard dash.

But more than just Perry, the whole tight end crew looked impressive. Between the foursome that is Perry, Wenrick, Eric Tomlinson, and Katrae Ford, all have great hands and blocking skills, and they average 6'5 255lbs. There's not much more you can expect from a tight end. Or four.

The bottom line is, again, this team is improving. There may have been a little rust on day one of Camp Socorro, but little by little that rust is coming off. And assuming all goes according to plan, this should be a well oiled machine by the time the team returns back to El Paso. 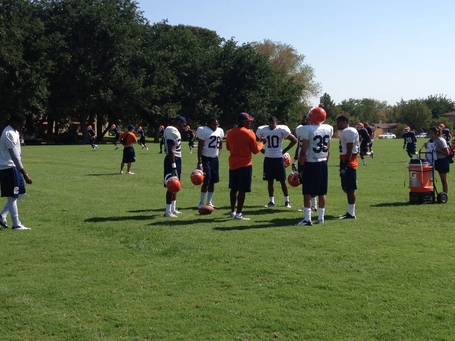 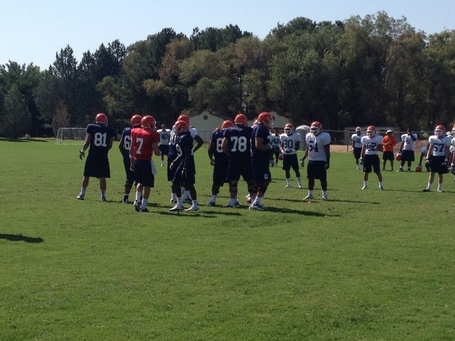 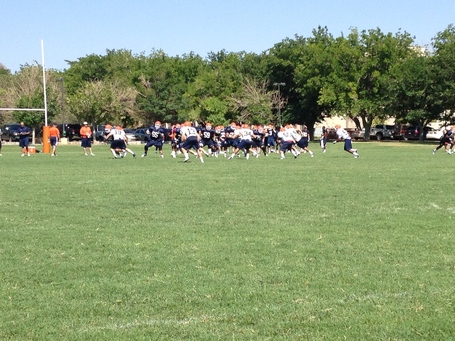 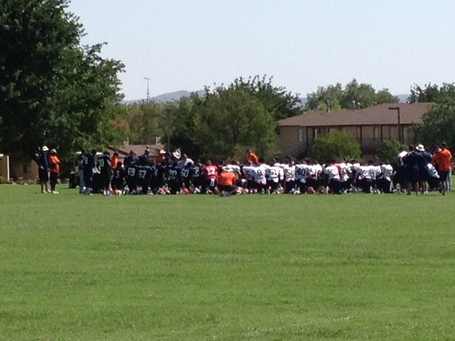 We have a couple more short video clips up on our YouTube Channel, and we'll be posting plenty more videos throughout the season. Make sure to check the channel out.