Today at the UTEP media day, the El Paso area media had the opportunity to meet Parade All-American and new Miner basketball player Twymond Howard. The 6'6 swingman from Pearl, MS arrived in El Paso just days ago, but is already attending summer classes, and has wasted no time getting to know his new teammates.

Twymond has been working on his game consistently since graduating from high school only weeks ago, and had actually been out in California for about a month preparing to make the transition to the D-1 level.

"It went great. Basically I was just going through a lot of skill sets, a lot of dribbling, and a lot of shooting sets just to get ready for this"

Now, I'm no collegiate scout, and I've yet to meet the entire 2012 class, but Howard may be the most ready to make an immediate impact on the court. The guy is in noticeably great physical shape. His athleticism blows you away when you see him sky through the air for monster dunks, and while his range may be a minor weakness, he had no problem draining jumper after jumper from 18-20 feet during our time with him.

Of course, the physical qualities that Twymond brings to the table will help him go a long way at the college level, but it's his work ethic and mindset that could potentially make a great player at that level, and could even take him beyond that in the future.

It just seemed like no matter the question he was asked, he always referred back to working hard, and getting ready for competition. I had a chance to ask Twymond how he felt about playing one of the toughest schedules that UTEP has ever seen, and he answered:

"It just going to make the wins even sweeter. We've just got to get in the gym and work to be able beat teams like that...I believe we all have to get in shape, you know, get our bodies right, and get our minds focused, and be ready to play against those types of teams."

As a high schooler, Howard was courted by programs from all across the country, and with good reason. As a senior, he filled up the stat sheet averaging 25 points, nearly 12 rebounds, 4 assists, 2 steals, and 1.5 blocks a game. It was no wonder the All American had programs like Baylor, Georgetown, Maryland, Ole Miss, and Tennessee offering scholarships.

In the end though, it was Tim Floyd and the Miners who were able to get him. When asked about his decision to join the Miners, Howard told us:

"It was just the way coach Floyd and his staff came to me. There were on me real hard, and they showed me that really wanted me here. They got to speak to my family a lot, and they came out to visit, and you know connected with my mom real well...and that's basically what it narrowed down to."

In the end, there's no doubt that the Miners got an amazing talent, and great hard working individual. This team is already loaded with talent and potential, and the addition of a Parade All-American can only add to that. It's going to be real fun to see not only what these guys can do this year, but what UTEP basketball will be in the years to come. 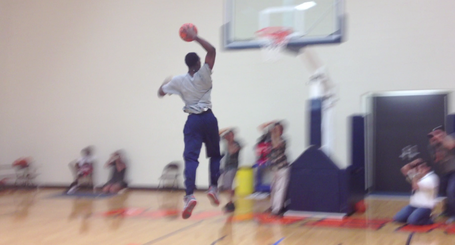