Share All sharing options for: The Dig: Championship Week Edition

The college basketball regular season has come and gone, and now its on to postseason play. This week all conferences will wrap up their respective tourneys, and next Sunday the committee will release the field of 68 that will be dancing in the biggest one of them all. For now though, let's take a look at the biggest news from around UTEP, Conference USA, and the rest of the country as well.

It was announced today that UTEP head coach Keitha Adams has been named the Conference USA coach of the year after leading her team to a 26-3 overall record, a 15-1 conference mark, and an outright C-USA title. The honor is the second of Adams' career, as she was also named the COY back in the 2007-2008 season.

Also, senior F Gloria Brown was named the Conference USA "sixth player" of the year, in addition to being an all C-USA first teamer, and garnering first team Conference USA all defensive honors. This season Brown averaged 11.5 points, 8.8 rebounds, and 2.9 in about 20 minutes a game.

And last, but certainly not least, sophomore F Kayla Thornton was also named to the All Conference USA second team after averaging 9.8 points and 7.1 rebounds a game this season. Congratulations to the Lady Miners on their amazing season and their great accomplishments. Keep up the good work.

The Lady Miners will be in action on Thursday in the C-USA tourney quarterfinal, taking on the winner of Wednesday's (8) UCF vs. (9) Southern Miss game.

The UTEP men's basketball team is on quite a different course than that of the women. Two weeks ago, the Miners were riding high after knocking off Tulsa, Memphis, and Southern Miss in a two week span, and were looking to potentially get into the top 4 seeds for the Conference USA tournament. Today, they look to prepare for their 8 vs 9 matchup in the conference tourney after dropping their last 3 contests.

The most recent of which, was a 57-48 loss in Dallas against an SMU team that managed only 57 points two weeks ago, in two games. SMU entered Saturday's contest with 2 wins in conference, but they bolted out to a 25-7 advantage and never looked back. While the Miners made the score look respectable, they were just completely outplayed by a team that had been "struggling" to say the least.

To be completely honest, its a shame to see these guys plays so inconsistent down the stretch here. Obviously, inconsistency had to be expected from a team that features mainly freshmen and sophomores, but seeing the strides that were taken at times, what has happened of late has just been completely disappointing. But, its a new season, and with each game more than likely their last of the year, it's time for this team to step up, and show that this season was actually a success at some level.

As I've said before, I don't expect the Miners to go out and win the Conference USA tournament, but I do expect them to be competitive. Wednesday they'll take on a somewhat revived Houston Cougar squad, and the winner will then play the host Memphis Tigers in a quarterfinal on Thursday. It'd be a real disappointment if the season ends on Wednesday. I guess we'll just see what happens.

The Miner softball team has started this season 8-13, but they showed some improvement in last week's UTEP Invitational. On Friday the Miners fell to UTSA 15-3, but they turned around and dropped Brown 10-2 in the second half of the day.

On Saturday UTEP fell in a heart breaker to Iowa State 7-6, and then set a record for most runs against Brown in the afternoon game, scoring 25 runs en route to a 25-7 victory. And, on Sunday, the Miners used a 7th inning go ahead grand slam to drop Valparaiso 7-6, before falling to UTSA in the final game of the invitational.

The Miner softball team will be in action again on Tuesday, taking on Evansville at Helen of Troy Field. Tuesday's action will feature a doubleheader that will get underway at 3:00 p.m. MT.

Washburn Named Freshman of the Week

For the fourth time this season, UTEP freshman G/F Julian Washburn has been named the Conference USA freshman of the week. In two games last week, Washburn averaged 16.5 points (including a career high 21 Saturday at SMU), 5 rebounds, and 1.5 steals, while shooting 48% from the field, 60% from three point range, and 75% from the free throw line. Congrats to Julian.

The fields are set for the Conference USA basketball tournaments in Memphis, TN. Both the men's and women's tournaments will get underway on Wednesday morning with the first women's game beginning at 11:00 a.m. CT, and the first men's game tipping at noon CT. 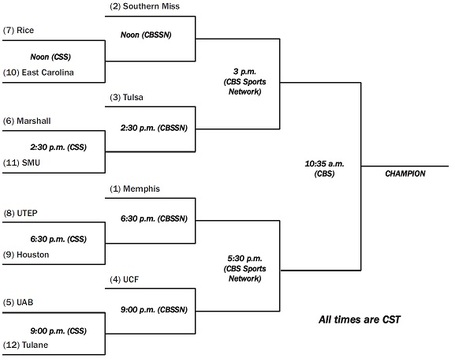 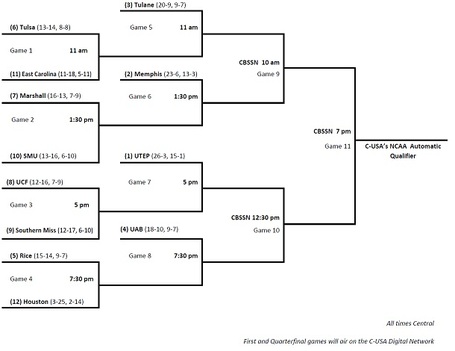 Conference USA has released its all conference teams for the 2011-2012 basketball season, and full lists can be found here (men's), and here (women's). Here though, are the first team selections.

Conference USA is still holding strong in ESPN's latest round of bracketology. Resident bracketologist Joe Lunardi still projects both Memphis and Southern Miss to make the tournament, with Memphis up to a 7 seed and rising, and Southern Miss still holding strong as a 9 seed, even after three losses in the last two weeks. At this point, Memphis has to be considered a lock, while USM is a near lock considering how weak the bubble is this year. Of course, there is still a ton to be decided in championship week, with potential bid thieves, snubs, and who knows what else. It's gonna be fun to watch.

"Syracuse University has self-reported possible violations of its internal drug policy and an NCAA inquiry is under way, according to school officials."

An anonymous source has stated that in all, at least 10 basketball players at Syracuse have tested positive for some kind of recreational drug use since 2001. It that time, players who tested positive were still allowed to practice and play, even when those violations called for suspensions. A three month investigation has brought us to this point, and now the NCAA will take it from here. Syracuse head coach Jim Boheim, AD Daryl Gross, and representatives from the NCAA were all unavailable for comment.

After missing the last 8 games due to a case of spinal stenosis, Connecticut men's basketball coach Jim Calhoun returned to bench for the Huskies on Sunday. His team won the game 74-65 against the Pitt Panthers. Five days ago Calhoun underwent surgery to try and relieve and pressure that a disc fragment was causing on a spinal nerve. When Calhoun was asked about his timing on returning to the bench, he answered "I just couldn't stay away any longer".