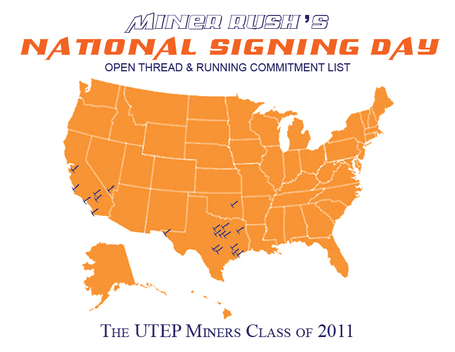 [Note by Adrian Mac, 02/02/11 2:53 PM CST ] The Class is Closed: The 2011 UTEP Miners football class is a wrap. The big surprises were that UTEP signed a second JC cornerback (Derrick Morgan) and a defensive end from Pasadena (Kishon Sanders). UTEP lost two commits on national signing day, including QB Antavius Sims to the Washington Huskies. Clint Simon did not sign with UTEP either. I have deleted those players boxes below. So, after the jump, you'll find full profiles of each member of UTEP's 2011 recruiting class. -- Adrian Mac

As verbal commits become UTEP signees, I'll update the status of each prospective player. When I make an update to a player's box, I will try to make a note in the comments to direct your attention to it. If any of you happen on UTEP recruiting news, please FanShot it or drop it in the comments so I can update this post accordingly. Also, if a recruit decides to sign elsewhere, I will note that below.