In The Dig:  The Dig returns after a two week hiatus to take a look at the latest round of Bracketology.  Also, an interesting read on college coaching salaries begs us to ask:  Do coaches deserve bowl game bonuses if their teams finish under .500?  Also, check out the awesome photo above of UTEP's newest statue.  Local photographer Adrian Garcia captured this shot which I couldn't stop staring at.   Check out his other shots here.

THAWED:  The Ice is Gone and the Water is On 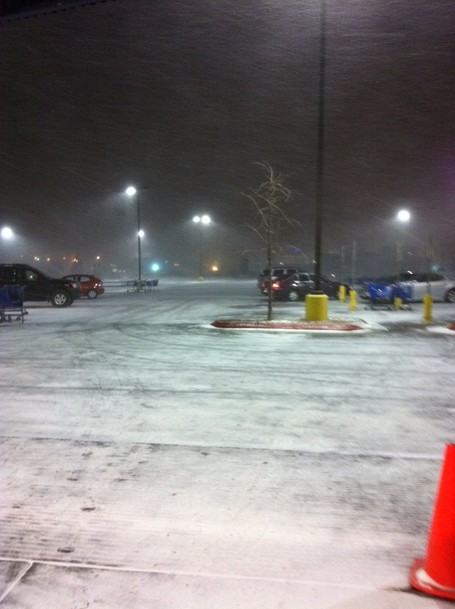 The cold is still coming back and forth, but thankfully the ice is now gone and the water is now running.  The winter storm engulfed the state for the better part of a week.  Thanks to local photographer Jessica Ruiz for sending me the above photo that shows the madness.  By the way, if you have a photograph you think should be featured on the Rush, FanShot it or email me at MinerRush@gmail.com.  On to the Miners!

SMU On My Mind

Two Bids:  SBNation's latest Bracketology has UTEP and Memphis both in the NCAA Tournament.  Nice to see the C-USA get some love with 7 teams in the RPI Top 100.

ESPN Don't Agree:  Joe Lunardi sees the C-USA as a one bid league and has UTEP in as a 13 seed. So not only does Lunardi think the C-USA is a weak league, he thinks that the champion isn't even worthy of a 12 seed.

Sports Illustrated Chimes In:  Andy Glockner of SI is with Lunardi.  Only UTEP makes the cut and is a 13 seed.  In fact Glockner only thinks Memphis is worthy of inclusion on his Bubble Watch.

Some Love for Julyan

#5 Fills the Stat Sheet:  W What's Up! El Paso has some nice quotes from Julyan Stone on his contributions to this UTEP team.

He’s also second in steals (37), third in blocks (13), tied for first in minutes played and is often given the task of guarding the opponent’s top offensive threat.

A Good Question:  Mike Price was one of 7 college head football coaches to earn a bowl bonus despite ending the year with a losing record.  The others were Mark Richt (Georgia), Dabo Swinney (Clemson), Ruffin McNeill (East Carolina), Paul Johnson (Georgia Tech.), Joker Phillips (Kentucky), Rick Stockstill (Middle Tennessee) and Derek Dooley (Tennessee).  Ron Morris of The State (a South Carolina newspaper) is wondering if any bonus should be paid to a coach whose team couldn't finish with even a .500 record.

Price's bowl bonus was equal to 1 months base salary, or $22,500.  Morris point is that the fiscal struggles of athletic programs are only worsened by paying out performance based extras.  And, paying out bonuses for bowl games when your squad can't finish at .500 isn't what school (or coaches) had in mind when they negotiated the deal.  Here's an excerpt:

Even so, these bonus clauses represent the fantasy world that has become college football over the past couple of decades. Football makes the money for the athletics family, so it gets to spend the money, despite that only 14 of the 1,200 or so NCAA-member athletics departments in the country turned a profit in 201

I don't think $22,500 is an unreasonable bonus amount for Coach Price.  His salary is one of the lowest in FBS and bowl games aren't exactly common here.  So, Morris' point might have more cache at Georgia Tech (where Johnson got $75,000).

Note that UTEP's financial reports from the New Mexico Bowl will be released soon.  If UTEP ends up in the red, perhaps Miner fans will look at the bonus a little differently.

Shout-Out to the Prospector:

UTEP's student paper has a nice read on UTEP athletes dating- its a Valentines Day Thing.

Just joking, right?  Lakers coach Phil Jackson recently joked with the press that the only way he'd trade for Carmelo Anthony is if the deal was a straight up trade for Derrick Caracter.

The QB of the Future?  Nick Lamaison's coach at Mt. Sac thinks Nick could be the man at UTEP.

"It's just like going to any other school," Jastrab said of Lamaison's pick.  "You want to find the school that's the best fit for you, and he ha a chance to be the guy (at UTEP)."

Homerun:  The UTEP softball team's 2011 season is about to kick off and here is a video preview of the team (courtesy of UTEP athletics)>

The schedule has been released.  I will write up a post with the full schedule. Here are the other C-USA schedules I've found so far.

Air Jordan:  Even Marcus Jordan's sneakers draw headlines.  He was wearing some Jordan shoes that aren't released yet and it caught the eye of this site.

Big Papa Dia:  Nice read here on SMU hoops team. SMU is guaranteed a .500 league record for the first time in Matt Dougherty's tenure there.  SMU has more depth than ever.

The Week After:   Check out this incredible story by Sally Jenkins of the Washington Post on the "bloated" Super Bowl.  It's worth your time.

For absurdity, how about those four Navy F-18s flying over the stadium - with its retractable roof closed? Everybody inside could only see the planes on the stadium's video screens. It was strictly a two-second beauty shot. Know what it cost taxpayers? I'll tell you: $450,000. (The Navy justifies the expense by saying it's good for recruiting.)

Remember Texas vs. The Nation?  Duke Keith at That Will Do takes a look at the atrocious attendance the All Star game yielded in San Antonio.  Let's just say the crows made an NMSU  home football game against Idaho look like Texas- Oklahoma.

Local Kid Done Good:  Isaac Spencer, the son of Austin High head varsity basketball coach Stacy Spencer, committed to Texas A&M to run track and cross country. Full disclosure, I once played hoops for coach Spencer and can't tell you how happy I am for him and his very hard working son.