Rollin' With Nolan: Rus Bradburd's 40 Minutes of Hell is a Must Read

Share All sharing options for: Rollin' With Nolan: Rus Bradburd's 40 Minutes of Hell is a Must Read 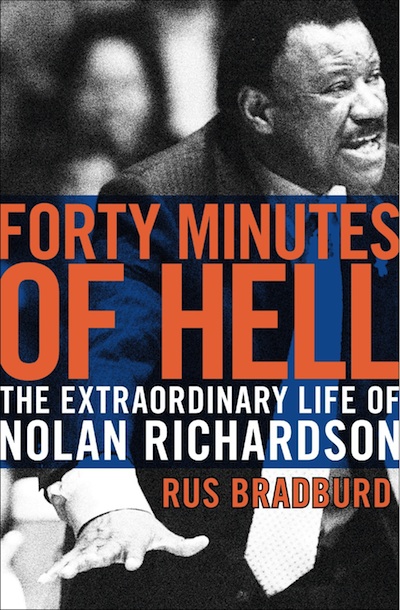 Over the holidays, I was finally able to get my hands on Rus Bradburd's "40 Minutes of Hell:  The Extraordinary Life of Nolan Richardson."  I'd hope that all college basketball fans find the time to read Nolan's story, but for El Pasoan's and Miner fans, it's a must read.  The book has been out for almost a year, but I'm glad I finally made the time to get through it.

Bradburd chronicles Nolan's life from childhood, in the Segundo Barrio, up to present day.  Nolan's upbringing coincided with the civil rights movement and the end of segregation in El Paso's public schools, swimming pools, restaurants, and hotels.

Richardson recounts some incredible stories about how his race forced him to miss out on various opportunities and experiences. As a high school baseball star at Bowie High, Nolan was not allowed to stay at the team hotel for a tournament in Abilene.  While the kid in Nolan wanted to sulk, his grandmother, who raised Nolan after his mother passed away when he was a child, forced him to go to the game.   He ended up dominating the game and was the best player on the field.  Notably, Richardson wasn't allowed to travel with Texas Western to a basketball tournament in Louisiana.

Bradburd explains how these and other experiences gave Nolan's teams an "Us against the World" mentality that he used to inspire and motivate his squads.  Nolan cherished the role of the underdog and used it to motivate even his most respected and revered teams at Arkansas.

If you grew up in El Paso, Texas, you have to read this book.  Bradburd does more than tell the story of Richardson, he also details segregation in El Paso.  Whose life would better tell the story than the first African American student ever to attend Bowie High School?  From a historical perspective, its essential reading for todays students who may know more or less about segregation in public places, but who may have trouble identifying with how it actually worked in El Paso.  And, how it came about to change.

The book also details Nolan's love/hate relationship with Don Haskins.  Nolan resented The Bear, who was hired just before his final season at TWC, because Haskins slow down/defensive game plan cut his stats in half.  Richarson's full court press (dubbed "40 Minutes of Hell") was the exact opposite of anything Haskins would ever do.  But, as the book unfolds you can see more and more about how Haskins helped shape Richardson as a coach.

Bradburd also focuses on how Nolan struggled to get along with longtime Arkansas AD and head football coach Frank Broyles.   "40 Minutes" paints a less than flattering image of the revered Arkansas administrator who was the last coach in the Southwestern Conference to sign a black player.   The dynamics of the Richardson/Broyles relationship, and the loaded history of race relations at the school and in the state, makes for one heck of a story leading up to Arkansas' NCAA Championship run and the end of the Richardson era at Arkansas.

From a hoops standpoint, I couldn't help but be fascinated with how Nolan developed his frenetic full court and trapping defense.  Last week, I attended the Arkansas- Texas basketball game in Austin.  Arkansas didn't press once.  Arkansas didn't force turnovers or have fast breaks.  Arkansas was drubbed 79-46.   The entire time I was watching the game, I couldn't help but remember Scotty Thurman, Corliss Williamson, and the swagger that the Richardson teams had there.   There's no denying that he was as innovative a mind college basketball has seen.

So, if you haven't already, check it out.  Also, click below for a video of Nolan Richardson discussing the book.