In The Dig:    I'm not saying that New Mexico is the worst team in college football, but there's no denying they're in the conversation....  at or near the top of the list.... in the top 5..... Okay, they might be the worst team in college football.  If you're the kind of Miner fan that enjoys watching the Lobos suffer, The Dig is the place to be......

UTEP Tailgating Rules:  Taking the Fun Out of College Football

Gameday.  Tailgates.  Frisbees.  Carne Asada.  Obnoxiously loud terrible music at the tailgate next to you.  Really Power 102?  Despite the usually awful choice of tunes, tailgating is a huge part of college football.  Not only that, but it's part of the college experience for UTEP's bright young minds.  Everyone I've talked to who tailgated last week said UTEP's new tailgating restrictions were a smashing success.  Assuming of course that the goal of the tailgate was to destroy any type of game day environment leading up to UTEP's game against Memphis.

The Prospector's Herman Rojas is a student who's not happy that the Miner Nation as a whole is being punished by the actions of a few.

The collegiate football atmosphere was the biggest casualty of the weekend. With the start of on-campus tailgating held back for two hours, the incentive to celebrate was significantly diminished. Lively music and highly attended parties were replaced with gated lawns and the occasional murmurs from groups who were considerably fewer and farther apart. If Sept. 25 was any indication of what to expect for the remaining three home dates, then the rule changes will have done their job – at the expense of the game day experience. Reports of rowdy behavior will decrease with these changes, but they also bring the consequence of having significantly fewer people turning out.

Rojas is exactly right.  If you make the Sun Bowl as uninviting a place as possible for fans to have a good time, you will see a drop in attendance.  The crowd on Saturday was announced at 29,765.  I'm not saying the new tailgating rules are the main reason why attendance was awful, but there's no denying that it is a factor.

The other side of that equation is that criminal complaints, of course, dropped over 50% from the NMSU game after the new rules went into effect.  Makes sense, since nobody went to the game.

"Why punish the whole group for the actions of 1 or 2 percent of the people?" said Ed Daffron, a season ticket holder. "If there are problems with underage drinking and things like that, that's security's job to take care of." He went on to say the crowd was not only smaller at this Saturday's game, but also less festive

Scout.com (College Football News to be more exact) writer Matt Zemek thinks Larry Porter made a mistake by electing to punt the ball to UTEP late in the fourth quarter Saturday.  Sometimes, a coach has to take a chance.

With just under 3:20 left in a 13-13 tie, Tiger coach Larry Porter faced a fourth-and-two at the UTEP 46. It goes without saying that if Memphis had gone for the first down and failed, UTEP – with a kicker who had banged in 57- and 50-yard field goals earlier in the game – would have been very close to field-goal range with a chance to win the game. Coaches are rightly worried that untimely gambles might unnecessarily cede a position of strength and give the other team cheap points. However, what coaches fail to realize is that when you’ve slugged in the trenches for 57 minutes on even terms, a high-impact play is going to be needed to settle the issue, one way or the other.

College Football News also ranks UTEP vs. Memphis as the 10th Best Game of last weekend.  (Thanks to Miner Mike for these links from CFN)

Click here to see a very cool time lapse video of the UTEP and Memphis game.

ESPN.com named Dakota Warren the Special Teams Player of the Week among all Non-AQ schools.

On to the Lobos:  This is Just Depressing

UNLV entered last Saturday's game against New Mexico 0-3.  The Rebels had been outscored 109-38 in their previous three losses.  Then, in ESPN.com's Pillowfight of the Week, the Rebels blew out New Mexico 45-10.  It's been a long year for Mike Locksley's club.

More than the Hot Seat.  It's Burning.

Every link I received related to UNM football has nothing to do with X's and O's.  They are all focused on one simple topic:  Should Mike Locksley be fired?

I understand the frustration. The lowly 0-4 New Mexico Lobos have played so awful over the first four games that the group actually looks worse than last year's 1-11 squad.

Rallying the Fan Base

This probably isn't what Mike Locksley had in mind when it came to the reception he'd receive a year and a quarter into his tenure at UNM.  There are now four "Fire Mike Locksley" groups on Facebook.  This one has nearly 500 members.  They made this, not me! 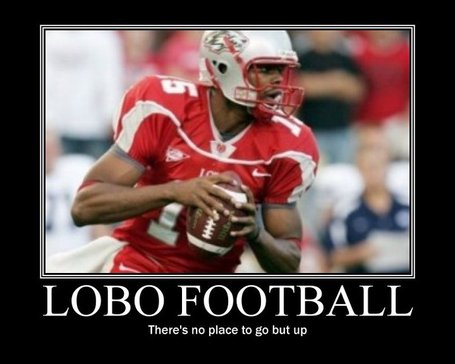 A $3 Million Buy-Out? A Six-Year Contract?

Yikes, even if UNM decided to fire Mike Locksley, they couldn't afford to.

"Right now, UNM is financially strapped institution that just bought out a coach a couple of years ago that put them in the red," Archuleta said. For his career as a Lobo, Locksley is 1-15. Archuleta said a buyout now for Locksley could cost the university $3 million, but the school is also losing money in ticket sales.

The Daily Lobo notes that when it comes to UNM's defense, "The Defense Rests."  The Lobo Nation really, really wants to see Mike Locksley go.  Well, I guess a couple of lawsuits and harassing a writer for the student newspaper will have that effect.  Oh, and I guess going 1-15 so far hasn't helped either.

Those same fans didn’t take kindly to the Lobos’ 45-10 mind-melting loss to UNLV, and callers flooded 770 KKOB’s "Extra Point" show to voice their protestations about the direction the program is headed.

UNM is down to a true freshman at quarterback. Their starter was injured against Utah and it doesn't look like he'llbe back for the UTEP game.

Mike Locksley says he hasn't decided yet who will start at quarterback on Saturday against UTEP, but Tarean Austin will get a big load of the snaps. Austin made his first career start last weekend at UNLV.  The true freshman threw one touchdown pass but was also sacked four times with a fumble and two interceptions.  Quarterback Brad Gruner went through pre-game workouts in Las Vegas but didn't have the strength to go.  Gruner is still recovering from a back injury he suffered against Utah.

Albuquerque news outlets literally have no good news to report on when it comes to Lobo football, so local station KRQE is actually doing analysis of whether or not UNM will hit #1 on ESPN's Bottom 10!  Is this a new low for any program?

The Lobos host 3-1 UTEP on Saturday. The weekend after that, the Lobos get New Mexico State in Las Cruces. The Aggies are ESPN's fourth-worst team in the country. So could the Lobos move in to the bottom two in ESPN's rankings this week? Maybe.