And Like That; He's Gone: UTEP Guard Myron Strong Kicked Off the Basketball Squad (Updated)

Share All sharing options for: And Like That; He's Gone: UTEP Guard Myron Strong Kicked Off the Basketball Squad (Updated)

With the issuance of a brief, two sentence press release, senior guard Myron Strong's career abruptly ended as a member of the UTEP Miner basketball team

I don't know what Strong did to warrant his dismissal from the team.  And, I'm positive the coaching staff and athletic department only did what they felt was necessary.  I'm sure they wish Myron the best as do Miner fans everywhere.  Hopefully he will learn from whatever it is he did and become a stronger person because of it.  Hopefully he isn't done playing college basketball because he is clearly talented.  Hopefully, Tim Floyd's move today will send a message to the rest of the team that this will be a disciplined program.

Maybe there is a silver lining, but immediately after, I can't help but focus on how big a loss this is.

This is a hard pill to swallow because I think all Miner fans believe UTEP, even without Arnett Moultrie and Derrick Caracter, are the only team in the C-USA with a legitimate shot at beating Memphis next season.   Strong's value to the squad, as evidenced with his play down the stretch last season, simply can't be understated. 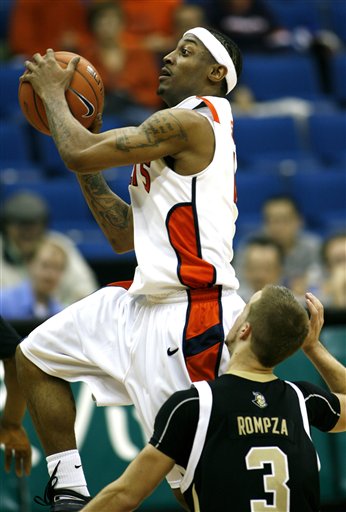 Let's not forget that late last season, as the Miners moved closer to clinching their first ever Conference USA Championship, Strong emerged as one of UTEP's best scorers off the bench.  He was also a solid defender who had the speed to guard just about anybody in the C-USA.  Against Rice, he finished 2nd in our MVP vote behind Derrick Caracter, when he chipped in 11 key points on 5/6 shooting.  Against UAB, in the final game of the regular season,  Strong put up 15 points on 6/8 shooting.  He also had four steals and three rebounds in only 22 minutes.

Julyan Stone is a pass first point guard.  That's one of the things Miner fans love about his game and every team needs a distributor to get everyone involved in the offense.  Sometimes, though, certain match ups make it necessary for the point guard to be more aggressive scoring the ball.  That's where Myron Strong excelled.  He was our change of pace guy, a speed guard who wasn't afraid to score when necessary.  When we needed a spark off the bench, Myron was one of the few guys we had who could give it to us.

So, yes, he may have only averaged 3.1 points per game last season.  But real Miner fans know how clutch his play was down the stretch.  That's why today is not a good day.  The defending Conference USA Champions became a bit less talented and deep  It just became that much more difficult for UTEP to cut down the C-USA Championship nets in 2011.