This Time:  UTEP football offers a defensive end; The Rush's Favorite Local Blog, Living El Paso has a great idea; Derrick Caracter enters contract negotiations; a new low for the El Paso Times; a UTEP Volleyball Star Blogs; and a Memphis writer has the audacity to point out that recruiting Trevor Mbakwe might not be a good idea, at least until after his felony trial concludes........

The L.A. Lakers have entered into contract negotiations with second round picks Derrick Caracter and Devin Ebanks.  NBC Sports thinks DC might be able to do more than ride the bench with Adam Morrison.

Caracter, on the other hand, could be ready to chip in immediately. The Lakers already signed Theo Ratliff to fill in for Josh Powell, but that spot on the depth chart may be more fitting for Caracter. If Ratliff could instead push D.J. Mbenga down a notch (should he return) and give Caracter some room to stretch his legs, the Lakers could have a rookie beast on their hands, capable of competing with NBA 4s on the boards while chipping in a few garbage buckets.

Not So Fast My Friend:

Lakers GM Mitch Kupchak was impressed with Ebanks and Caracters play but also wanted to point out that the NBA summer league competition is not close to what the guys will see in training camp.

"I think they did play better than what their draft position indicated. But most of those guys (playing in summer league) aren’t going to be in the NBA. You’re evaluating potential NBA players against (some) players that won’t be in the NBA. If you can’t play well in the summer league, (however), it’s an indication that you can’t play at the NBA level." Kupchak said the next step is evaluating both players at training camp

I think Living El Paso might be El Paso's best community blog.  Today, LEP is wanting to see if UTEP could "light up" a building on campus, or nearby, to signify a Miner victory in football.  It's a great idea, UTEP needs more tradition, not less, and lighting up a building, especially one visible on 1-10, would help connect the city to the school in a new, fun, way.  I wonder if it would be possible to light up the star on the mountain orange and blue?  Imagine how awesome that would be if the star was lit Miner colors after a win?  The whole city would be proud.

So where are some prominent places on UTEP’s campus where the this could be done?  UT’s  and Baylor’s lighted towers are both visible from I-35 so everyone knows when the schools won.  If they decided to keep the stacks at Asarco…maybe those could be lit up to signify a UTEP victory?

Katrae Ford will join UTEP's football squad this fall as a freshman.  With Jonny Moore a bit nicked up after spring ball, will Ford find himself on the field a bit as a frosh?  The Miners, after Moore and Elijah Goldtrap, are thin at TE.  Check out these highlights of Ford that just went up on Youtube.  I'm excited to see this kid play.

The Prospector's Alex Morales has a nice pre-camp article up.  Among the quotes, Andre Patterson thinks Braxton Amy might have pro potential.

"I think Braxton Amy has a very good chance of being a guy who plays on Sundays," Patterson said. "The defense that we have will enable him to show off his talent and be a good marriage for his abilities and talent."

Eat Some BBQ Too:

Donald Buckram is off to Memphis for the C-USA media days.  He sounds excited to face the media who will undoubtedly know a little more about him after last season.

"I'll get to see (Houston quarterback) Case Keenum, some other top players," Buckram said. "It will be nice to see how they are outside of football. I've only seen them on the field, after the game. Now I'll get to conversate with them."

"Texas Tech and UTEP have now offered," Robertson said. Robertson said that he doesn't have any favorites when it comes to the recruiting process and that ..

The Foods Good Too

The Rush doesn't often cover volleyball or sports not named UTEP football or basketball, but I wanted to welcome Madison Morris to the UTEP family.  The Lampasas volleyball star committed to UTEP and judging by her quotes she sounds like a really bright, young woman.

"It just felt right," Madison said Wednesday. "It's a lot different than here and I like that a lot. My grandparents are here. My parents live here. I wanted something else. "There's mountains behind the (football) stadium and it's really pretty.

Here are some of her highlights:

A New Low for the EPT?

The El Paso Times stopped the presses because reality tv star Kim Kardashian was in town for a night.  Doug Pullen writes an excellent, I mean excellent local music blog, but I couldn't get past this sentence he wrote.

Technically, it's a fashion show, with 13 models strutting a runway in threads by local compant Sexy Jeans, and a launch event for Xtreme, which spent nearly six months trying to secure Kardashian's fabulousness for tonight.

Secure her "fabulousness."  I have no words.

Done Good:  Former Miner Bobby King has landed a job as a defensive assistant with the Dallas Cowboys.  Congratulations!

Awful, awful, news:  Terrible story, Emil Smith, a guy UTEP offered but who committed to Boise State passed away in a car accident.  He was just weeks away from starting college.  Best wishes to his family.

More Volleyball:  Awesome to see this, a UTEP volleyball player, Jacqueline Cason, has her own blog.  I will be sure to add it to the UTEP blogroll over on the left sidebar.

It's a Pig:  The Miners haven't released next seasons basketball schedule, but we do know they will take on the Texas A&M- Kingsville Javelinas.

I got some nasty emails from Memphis fans over the Trevor Mbakwe article.  Sorry, but if you are going to claim to be starting a new era, a post no-SAT required John Calipari era, and kick it off by trying to find ways to bring in an accused felon, then don't be surprised if Miner fans call you out.  Especially, when El Paso and Tim Floyd have been punching bags in your media over the last several months.  If you want to defend the decision to recruit him, before trial, then please do so in the comments, we can discuss it, but if you ask me, recruiting him as it stands now is pretty low- especially considering the nature of the accusations, which are stunning.

And, I'm not the only one who thinks so, the Commercial Appeal's Geoff Calkins thinks it's a mistake to recruit him before the verdict too.

The hard question is whether to recruit Mbakwe at all. Does Memphis really need to take on a player with this sort of legal trouble? Especially given that Pastner is trying to run a different sort of program than John Calipari ran? Calipari may have done a lot of questionable things at Memphis, but he never played a young man who was charged with sending a woman into surgery.

Even more stunning, is that the Tigers may actually let Mbakwe suit up to play.... before trial!

The problem is that Mbakwe is looking for another school right now. He wants assurances that he'll be able to play even if the trial is pushed back again.

Memphis has been exploring whether to give him those assurances. Which is astonishing, honestly.

I would like to assemble a post with all of the C-USA Football Schedule posters so we can mock them, and vote on who has the best.  If anybody know where I can get UTEP's poster, please let me know.  Here are some of the ones I've found. - Via the Wiz of Odds. 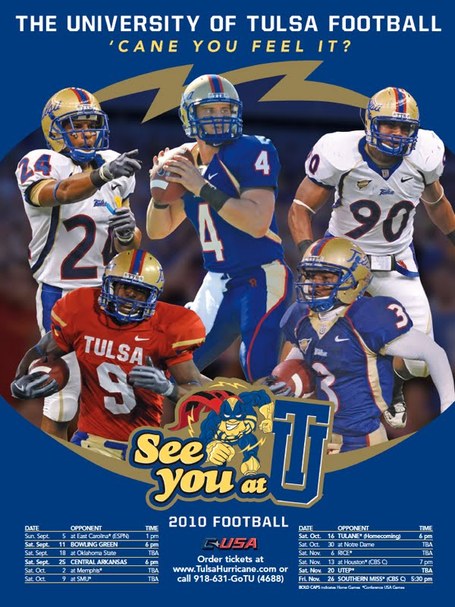 NMSU's Poster- I think that's the most people to every actually be at their stadium at one time.  Admittedly, the poster is well done. 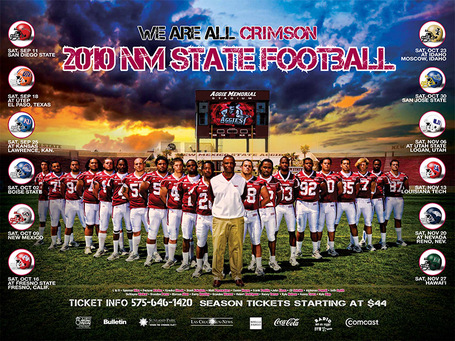 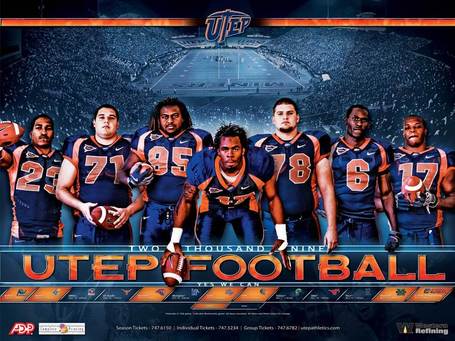