Sam's Town: A Preview of the 2010 Rice Owls Football Team

Share All sharing options for: Sam's Town: A Preview of the 2010 Rice Owls Football Team

Note: Here's a link to Part 1 of Miner Rush's Rice Preview; an interview with the Houston Chronicle's Jeffrey Martin. 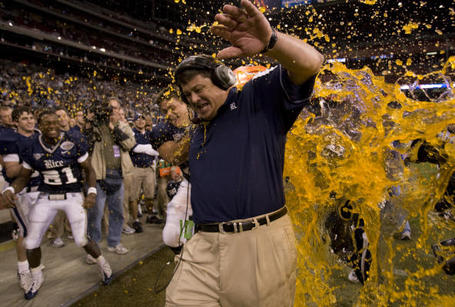 David Bailiff's third season was his most difficult at Rice. In 2008, his offense was anchored by one of the best duos in recent C-USA memory, quarterback Chase Clement and wide receiver Jarrett Dillard. The Owl's rode the pair all the way to a 10-3 record and a 38-14 win over Central Michigan in the Texas Bowl. We all knew the Owls would take a step back in 2009. No team can recover from losing two studs like that. What we didn't expect was for the Owls to fall quite as hard as they did. The Owls didn't taste victory until November 14, 2009 after opening up 0-9. Only one game was close, a 31-28 loss to SMU. The Owls were outscored 395 to 147 in those losses. The Owls offense only mustered 16.3 points a game during that stretch. It was ugly football.

The Owls were uncharacteristically young for any division 1 school. Bailiff started fourteen freshman and sophomores. Quarterback Nick Fanuzzi, a transfer from Alabama, struggled in his first real action since high school in 2006. Fanuzzi was on roster with the Crimson Tide in 2007, transferred to Rice in 2008, and wasn't eligible to play until last fall. Fanuzzi was a highly sought recruit in 2006, and was offered by both Miami and LSU before signing with the Tide. In 10 games last year, Fanuzzi was decent, not great. He wasn't a turnover machine, only 8 INT's, but the Owl's clearly struggled to score points with him at the helm. The Owls finished 11th in the conference in scoring offense (18.5 ppg). A dual-threat quarterback in high school, many expected Fanuzzi to be able to make plays with his feet. He was never really able to establish himself as any sort of running threat last season.

It was in the tenth game of the season that the Owls finally showed some signs of life on offense. In their last four games, including the close loss to SMU, Bailiff's squad averaged 25 points per game and won two home games. First, the Owls beat Tulane. Lastly, as Miner fans no doubt remember, the Owls squeaked by the Miners 30-29 in a game that officially eliminated UTEP from bowl consideration. In their final game of the year, the Owls regressed to their earlier form and were blown out by Houston 73-14. When your season starts 0-9, 2-2, even with a blowout like that, looks pretty good. Left for dead, the Owls showed some fight to finish the season and enter 2010 hoping to build off those two wins in their last three games.

Hired to replace Tulsa's Todd Graham, Bailiff has shown a dedication to continue the spread offense that Graham implemented. After Rice's 10-3 season in '09, he was rewarded with a new 5-year contract.

Bailiff's shown he can win at Rice and that he has the ability to lure top-level transfers to Rice. The verdict on his recruiting classes won't really be in until after this season as his first class will be juniors this fall. With 18 returning starters, Bailiff's squad won't be the youngest in the league again, but will be one of the more experienced squads in the league.

After last season, offensive coordinator Ed Zaunbrecher left the program to "pursue other opportunities." Bailiff turned to David Beatty, a former wide receivers coach at Rice and Kansas, to take over the program. Beaty, who was coaching Texas powerhouse football squad MacArthur (Irving) High in 2005 has risen through the coaching ranks at an incredible pace. He brings a new, youthful, perspective to Rice's offense. At Rice, Beaty helped install the spread offense that helped Clement and Dillard explode onto the scene. At Kansas, Beaty helped Kerry Meier and Desmon Briscoe become standout wide receivers in a prolific spread offense.

It's rare in the C-USA to see any coordinator stay at the same post for four seasons. Rice's defensive coordinator, Chuck Driesbach, is one of those few. Driesbach's defense was solid in 2008, but really fell apart last season. The Owl's were at or near the bottom of the conference, and the country, in seemingly every significant defensive statistic. Rice wasn't bad on defense; they were terrible. In the C-USA, a conference littered with struggling defenses, the Owl's finished last in scoring defense, and last in the country by allowing over 43 points per game. Rice clearly will need to improve for Driesbach to feel comfortable about his job security in December.

"With a newly minted and enthusiastically creative offensive coordinator - David Beaty - in place, McDonald will get a shot to showcase his dazzling combination of power and grace," writes Bower.

"Dazzling combination of power and grace." Wow. This, I have to see. That commentary is, dare I say, "Tebowesque?"

Biggest Questionmark: Who's the QB?

Fanuzzi, as discussed by the Houston Chronicle's Jeffrey Martin, was not named the starter after spring practice. In fact, Taylor Cook, a transfer from Miami, and Taylor McHargue, a redshirt freshman from Cedar Park, appeared to be the front-runners exiting spring. Cook has above average size, at 6'7 and 245 pounds.

McHargue and Cook split time with the first-team offense during the spring game. Taylor McHargue finished 8-of-11 passing for 126 yards and three touchdowns. Taylor Cook, went12 for 18 for 111 yards and a touchdown. Bailiff didn't tip his hand when he described their performances at Rice's spring game. He told the Houston Chronicle, "McHargue showed he has a nice arm and good feet, and Taylor Cook made some big-time throws. You can see that at 6-7 he’s not a slow kid — he can run." Yeah, but who will be the starter?

Regardless of who's taking the snaps, expect Rice's offense to improve with the arrival of famed Texas running back prospect Sam McGuffie. McGuffie, one of the highest rated prospects in the country in 2007, started his career at Michigan. McGuffie was a mega recruit. He rushed for 5,847 rushing yards and had 83 career touchdowns at Cy-Fair High School in Cypress, Texas. His high school highlight tapes are still popular on YouTube (the one below has nearly 270,000 views).

As a true freshman, McGuffie led the Wolverines in rushing with 486 yards and three touchdowns despite missing three games due to injury. Against Notre Dame, he had 178 all purpose yards.

So, how'd he end up at Rice? Sports Illustrated's Andy Staples wrote an excellent profile of McGuffie back in March. It appears, that McGuffie was truly homesick.

After wrestling with the decision to leave Michigan, Sam finally made it after he returned home from a funeral late in the 2008 season. The Wolverines still had to play Ohio State, but McGuffie knew he wouldn't be back. He had decided to come home, because his family needed him. "Sam came back mainly for his family," Victoria said.

During an interview with McGuffie in 2008, he wondered how his departure might affect the lives of his younger brother, Jacob, and sister, Haley. Sam loved being a big brother, and he wondered if he could offer the same support to his siblings so far away.

As you can see, the Owls really struggled last year. David Beaty definitely has his work cut out for him. The Owls finished 9th or worst in the C-USA in every major statistical category and were among the 10 worst teams in the nation in total and scoring offense.

Solomon, a 2nd Team All C-USA selection in 2009, was really the bright spot for the Owls. He's fourth on Rice's all-time sacks list, with 15.5. Last year, he was among C-USA's best with 6.5 sacks. Ozougwu finished second among C-USA's defensive linemen with 61 tackles last year and also chipped in 4.5 sacks and 10.5 tackles for loss. The strength of Rice's defense are these two linemen.

Now you see why Driesbach needs a big year out of his defense. Just like on offense, the Owls were in the bottom half of the league in every major defensive statistical category. They were the nation's worst scoring defense. Dead last. They were among the worst defenses in the nation against the run and the pass and they couldn't get to the quarterback or force turnovers. They really, can only get better. Right?

The Schedule: Not Helping the Cause

Rice, out of financial need, has scheduled a ridiculous non-conference schedule. The Owls open up against Texas, have Northwestern and Baylor come to town, and face the best teams in C-USA. This schedule, especially the first four games, is one of the hardest in the league.

The Owls took a major step back in 2009 on offense and defense. Their new offensive coordinator, David Beaty, has far better weapons at his disposal than Rice did last year. Sam McGuffie, the transfer from Michigan, and Taylor Cook, the transfer from Miami, give Rice two weapons that should help them improve in 2010. On defense, Rice brings back 9 starters from the nation's youngest team in 2009. The Chronicle's Jeffrey Martin thinks 6-6 is a reasonable goal for this year. In C-USA, anything can happen, but for Rice to get to 6 wins it will be one of the bigger success stories in the league next season. Because, after reviewing these numbers, it's hard to imagine a team with 18 starters back from a team that produced those numbers can get to a bowl. Sam McGuffie is good. Really good. He's a high school legend. If he can get the Owls to 6-6, he'll prove all the hype was justified. We'll see soon enough.