Share All sharing options for: The Dig: Craving a Chiara Burger Basket from Papa Burger Edition

If you've never had the Chiara Burger from Papa Burger, you are really missing out.  Papa Burger is everything Roscoe's used to be and it's open for dinner  (No website, but check out their Facebook if you want more info).  Site News:  The Rush keep it in the 713 with their next C-USA preview.  Anyway, tons of good links from the Miner and C-USA Universe; some recruiting nuggets, tons of conference expansion talk, and bad news for our friends up 1-10.

I'd Say Lukewarm at Best:  ESPN's Graham Watson is taking a look at what C-USA coaches may be on the hot seat this season.  He thinks Mike Price and UAB's Neil Callaway are in the most trouble.  My thoughts are covered here, where I discussed the topic with the Yahoo! Sports blog Dr. Saturday.

Needs to win right away Mike Price, UTEP: Price has become a bit of a fixture in this particular position on the hot seat list. He was given a vote of confidence at the end of last year, but that was because he still has players such as quarterback Trevor Vittatoe and running back Donald Buckram on his roster. But they’re gone after this season, so Price needs to make something out of this year or else.

Why Didn't This Come Out Sooner?   The EPT"s Adriana Gomez Licon is reporting that UTEP is diverting some $774 per student to the athletic department each year.  As we all know, UTEP students voted against the athletic's initiative that would have added an additional fee to their tuition bill to subsidize the athletic department.  Would that increase have been in addition to these diverted funds?  Would it have lowered the diverted amount?

The study by the Center for College Affordability and Productivity found that UTEP diverted $774 per student into athletics in the year 2008-09 -- the third-highest in Conference USA and significantly higher that the national average of $506. Of 99 schools studied, UTEP had the highest percentage of low-income student in Division 1, with more than 62 percent of the students receiving financial aid.

Knight Time:  Bill Knight has a nice profile on UTEP track star Siobhian Crain who was, luckily, wasn't seriously injured in a car accident last week.  She will be competing at the NCAA Championship meet next week.

The Draft:  DraftExpress has Derrick Caracter going in the second round of the 2010 NBA Draft to the Dallas Mavericks.

More DC:  Hoopsworld thinks DC is one of the 5 Most Underhyped Players in the Draft.

In workouts Derrick is showing teams what he's capable of by taking it to nearly every power forward ranked ahead of him. Getting into the first round is going to be quite difficult for Derrick, but he should be one of the top players taken in the second. From there expect him to have a much more successful career than several of the bigs taken before him.

Indy Sports Nation has some video highlights of DC's workout with the Indiana Pacers here.

Grades Are In:  ESPN's Michael LaPlante gave Tim Floyd's first recruiting class at UTEP a B.

At least Barbee did not leave the cupboard bare for new coach Tim Floyd because the Miners should have a team that is ready to battle Memphis and others for supremacy at the top of Conference USA. Rashanti Harris (Columbus, Miss./The Patterson School), along with John Bohannon (Lancaster, Texas/Lancaster) provides versatility and an immediate presence in the paint.

Zig Zag:  Last week, the Rush let Miner fans know that San Diego Star shooting guard prospect Norman Powell had listed UTEP in his Top 3 along with Cal and Arizona State.   Now, we know that Gonzaga is interested too.

The One That Got Away:  UTEP was reportedly showing interest in Killeen, TX quarterback Michael Cummings.  Today, he chose the Kansas Jayhawks over UTEP, Oklahoma State, Tulsa, and other suitors.

The Big One;  As noted in the FanShots, Orangeblood's Chip Brown is reporting that the PAC 10 intends to invite 6 Big 12 schools, Texas, A&M, Tech, Oklahoma, Oklahoma State, and Colorado to join their league.  Early signs indicate that the report has merit.  First of all, the reporter was a longtime beat writer for the Dallas Morning News covering Texas and the report cited "multiple sources."  Second, Colorado AD Mike Bohn corroborated the report that night.  Now, Sports Illustrated's Stewart Mandel is connecting the dots.

Cal Chancellor Robert Birgeneau sounded positively giddy when he told a Massachusetts alumni group last Monday he would be "surprised if something did not happen [this weekend] that revolutionized college athletics," and that the league was considering "a couple of schools, at least one of which meets the academic standards of the rest of the Pac-10." 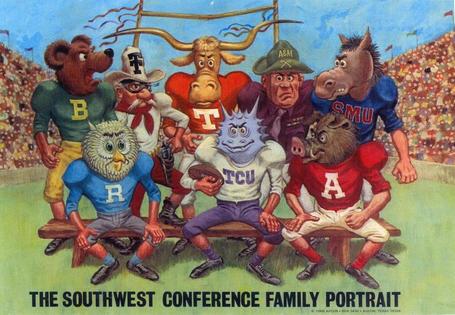 Something to Learn From & Guide Us:  If you are curious as to how the new Big 12/Pac 10 deal might work out, check out this incredible article from the San Antonio Express News  that details how the Big 12 formed in 1996.  It will give you some insight into all the wheels at play right now.  It's a fascinating read.

A Local Take:  Duke Keith has his thoughts on expansion here.  He has a positive outlook on the state of the C-USA.

Nonetheless, I still believe UTEP is in a good place. Banowsky has negotiated a better TV contract than both the WAC and the Mountain West already, and his conference vision is Texas-centric.

They could hitch up to a smaller, less-prestige conference like Conference-USA or Mountain West. That might work for Iowa State — the Cyclones might be more competitive with programs like Memphis and Houston, Air Force and TCU — but the other three aren't likely to be too excited about the step down.

Was Mack Rhoade's Reading the Rush?  I asked Dustin from Scott & Holman what he would do if he was AD for a day.  He said he'd fire Houston baseball coach Rayner Noble.  Well, he got his wish.

Depth Becomes Her:  Steve Irvine of the Birmingham News is wondering if the C-USA would be best served by having one dominant team, Houston, as opposed to a league with parity. Kevin Sumlin doesn'ts want the league to root for the Coogs.  They play for themselves.

"We’re not flag bearers for anybody but the Univer­sity of Houston," Sumlin said. "If you start thinking about all that, that's way beyond me. My plate is full. I get caught up in trying to win every game on our schedule and if somebody does that then certainly things will work out." 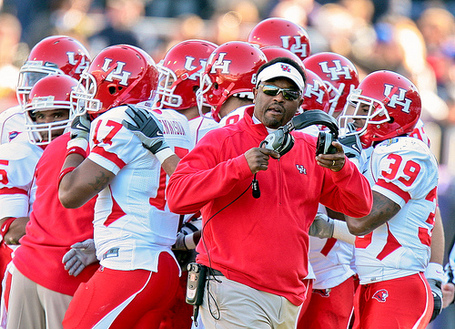 Tell that to Oklahoma State and Texas Tech:  The Daily Oklahoman's Berry Tramel is ranking the nation's weakest non-conference football schedules.  He thinks Mississippi St. is #6 because Houston is the toughest squad in their non-con.

Title In Mind:   The Houston Chronicle's Jeffrey Martin thinks Rice is in the Austin Regional to win it.

Although the area is already cluttered, Wayne Graham insists there is room for more, perhaps as the result of this postseason, which begins this weekend with regional play in Austin on Friday against Louisiana-Lafayette (37-20).

But, the Owls dropped Game 1, 1-0 to UL-Lafayette.  The Cajun's Zach Osborne was simply unhittable.

Rice averaged more than nine runs a game en route to the regional, scoring 20 or more six times. The Owls had not suffered a shutout all season. But the first seven batters for the Owls went a combined 2 for 24, and Rice was 1 for 10 with runners in scoring position.

Good News on the Recruiting Front:  Rice has two commitments for their football class of 2011.

The First:  Matt Wofford, a stud offensive tackle prospect from Cedar Park (just northwest of Austin) has committed to Rice over offers from Houston, the SMU Mustangs, the Kansas Jayhawks, and UNT.

The Second:  Fred Jackson, a 5-foot-9, 170-pound defensive back from Eisenhower High in Houston chose Rice over offers from Air Force, Army, Navy, and UL-Monroe.

I'm Going Home:  Former Iowa running back Jeff Brinson (left in pic)was granted a waiver from the NCAA and will be eligible to play for UCF in the fall.  The Knights are a bit thin at RB since Brynn Harvey suffered a knee injury in spring camp.

Brinson, a 5-foot-11, 215-pound graduate of St. Petersburg's Northeast High, wanted to play closer to home. One of his family members has suffered a severe illness and Brinson, who just finished his redshirt freshman season at Iowa, wanted to return to Florida.

TMI:  Everything you ever wanted tn okay about the SMU mascot, Peruna the Pony, can be found here.  Lot's of detail.

Arnett Sighting:  Former Miner Arnett Moultrie will take some visits before deciding where to transfer to.  Gary Parrish of CSB Sports has the story.

Not Unforgettable:  One Bronco Nation Under God, the SBNation blog for the Boise State Broncos, is counting down the rivalries they will miss the most from their WAC days.  NMSU isn't very high on the list.

Last year the New Mexico State Aggies cut approximately $1.5 million from their athletics budget. This year, they will have to cut another $1.5 million.

I think I know why NMSU is struggling financiall:  This pic was taken on a Gameday. 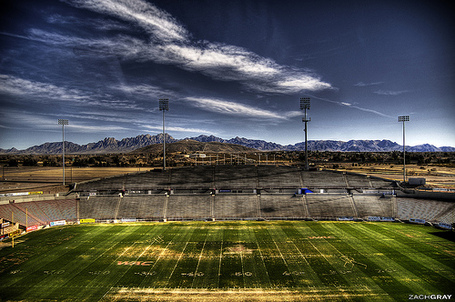