In the last few weeks, we've had a steady report of offers going out by the staff, and now we can really hone in on some targets that UTEP has identified as keys to the 2011 puzzle. Hamilton reports that UTEP is expressing interest in six new prospect, five of whom, have already received offers from the coaching staff.   Scout is also reporting that Mike Price has offered a three star dual threat quarterback.  More, after the jump.

Very physical at the point of attack, Brown does a good job of taking on and shedding blockers. More than anything else, the kid is a striker and plays the game with ferocity.

Brown is one of the highest rated available prospects in the state.

Mustafa sounds like a tough kid.  Playing a playoff game with a broken hand will give you that reputation.

3.  LeShundrick Morrison (Safety, Dallas):  According to Hamilton, Morrison has offers from Baylor, Houston, Missouri, Texas Tech, Minnesota, New Mexico State, and UTEP.    He attended one of UTEP's satellite camps.  Orangebloods ranks the 3 star prospect as the 85th overall prospect in Texas.  Their scouting report had this to say about him:

If you want him to blitz, he'll make a play. If it's third and one, he'll come up with a big stop. He's just that kind of player. Yes, might be a 4.6 or 4.7 guy, but I think he plays a little faster than when he needs to on the field.

Click here for Morrison highlights.  Like Trey Brown, is a very high profile recruit.  It's nice to see Mike Price putting UTEP in contention for a guy with this kind of potential.

5.  Marquel Bryant (Defensive End; Dallas Skyline):  It looks like UTEP, Texas Tech, Kansas State, SMU, and Colorado State have offered the defensive end prospect.  ESPN ranks Bryant a three star prospect and he was on their Top 150 Watch List.  He has a nose for the ball and has a frame that can be molded into an elite DE (6'3". 215).  Bryant, wisely, uploads his highlight tapes to Youtube and they are good quality.

6.  Lovett Gibson (Wide Receiver, Cedar Hill):  Hamilton also reports that Gibson has offers from UTEP, Minnesota, Colorado, North Texas, and Western Kentucky and he adds that Boise State and Baylor are close to offering him a scholarship too.  He's another athlete who attended one of UTEP's satellite camps.  Gibson is another high profile talent, a Rivals 4 star prospect with top end talent.  He's getting interest nationwide.

7.  Jonovan Griffin:  Pony Stampede ($), not Hamilton, is reporting that the dual threat quarterback from McKinney, Texas, has received an offer from UTEP.  According to Pony Stampede, also a Scout affiliate, Griffin has offers from Texas Tech and Tulane as well.  Rivals rates him a three star quarterback and lists him as 5'11 and about 162 pounds.  RIvals also reports that he runs a 4.43 forty yard dash.  I am not sure if UTEP is recruiting the athlete as a quarterback.  ESPN (Insider) says he will almost surely play cornerback or wide receiver in college.

Griffin is a sensational athlete and once passed and ran for more than 300 yards in a single game. 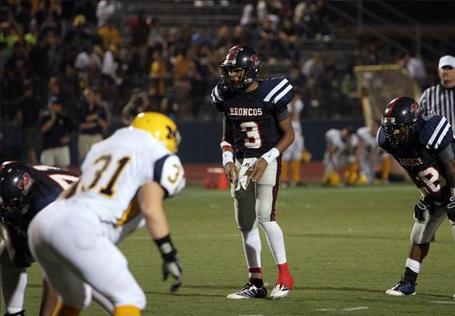