Inside The Eye: A Preview of the 2010 Tulsa Golden Hurricane Football Team

Share All sharing options for: Inside The Eye: A Preview of the 2010 Tulsa Golden Hurricane Football Team

Todd Graham was looking pretty good after his first two seasons as the head coach at Tulsa. Graham, with only one year of head coaching experience under his belt, took over after Steve Kragthorpe left to Louisville. Graham's tenure kicked off in about as good a fashion as possible. The Hurricane won the C-USA West in his first season and the Hurricane beat down Bowling Green 63-7 in the GMAC Bowl. In his second season, TU tied for first in the West, won 11 games, and blasted Ball State 45-13 in the GMAC. Steve who? Graham, who once was the defensive coordinator at Tulsa before his year at Rice, had the Hurricane's program headed toward the promised land.

Then, in 2009, the train appeared to slip off the track. A 5-7 season isn't an all-out implosion, not even close, but with former Texas Longhorn quarterback G.J. Kinne running the offense, most expected Tulsa to have the firepower to at least secure a bowl berth. In fact, five games into the season, it was not at all ridiculous to think TU was the favorite to win the West (alongside Houston).

Five games into the season, TU was 4-1 with only a loss to #12 Oklahoma blemishing their record. Tulsa steamrolled Tulane, New Mexico, Sam Houston and Rice to the combined tune of 164 to 36. That's sick. TU then faced off against #6 Boise State, in Tulsa, in front of a national audience on ESPN. The Hurricane fought valiantly but ultimately lost 28-21 to the eventual Fiesta Bowl Champions. TU looked like the best 4-2 team in the country.

Then, they traveled to El Paso. UTEP, hell bent on avenging Tulsa's 77-35 route from the year before, rode Donald Buckram's 165 yards and two touchdowns to knock off TU in front of another national TV audience on ESPN. 39 seconds left. UTEP's ball deep in the red zone. Tulsa's defense knew Donald Buckram was coming. And, the rest is history.

The close, tough, losses to Boise State and UTEP sent Tulsa into a tailspin. Nobody expected what would happen next. The Hurricane would lose their next five conference games. Some were heartbreakers (see the 45-46 gutwrenching loss to Houston) but others weren't close (see the 44-17 loss to East Carolina). The schedule wasn't easy, but it was manageable. Tulsa had a four game stretch where they played four C-USA bowl teams (SMU, Houston, East Carolina, and Southern Miss). They lost 'em all.

Tulsa started 2009 red hot, looking primed to challenge for the C-USA West again. They ended the year 5-7, with a defense exposed against Houston, East Carolina, and Southern Miss (Tulsa gave up 45 ppg in those contests).

The offense showed spark in several games but never established any sense of a running game. Kinne led TU in rushing yards (399 yards, 2.7 ypc). He did establish one of the best QB/WR connections in the league with star wide receiver Damaris Johnson (78 rec., 1131 yards, 3 td's). Johnson emerged as a star. Kinne showed grit in the face of constant pressure. Tulsa gave up more sacks than all but two FBS schools, good for last in the C-USA.

So, Todd Graham, and the Tulsa Golden Hurricane enter 2010 in an unusual position. They enter 2010 with something to prove.

Calling first year OC Chad Morris "green" may be an understatement. Prior to joining TU's staff, Morris served as the head coach at Lake Travis High in Austin. Morris has been wildly successful at the high school level and is known for developing top quarterback talent. Before taking over at Lake Travis, Morris coached Texas powerhouse Stephenville. At Lake Travis, Morris coached Texas starter Garrett Gilbert and helped turn him into one of the highest sought quarterback recruits in the country. Morris will call the plays and run an up-tempo, spread offense. G.J. Kinne has the arm to prosper in this offense.

Random note: Morris has coached three quarterbacks who at one point played quarterback at the University of Texas. Gilbert, Kinne, and Jevan Snead, who Morris coached at Stephenville. All three were highly sought recruits on the national radar.

Keith Patterson has been on the Tulsa staff for eight seasons and has served as the defensive coordinator for the last four seasons. Patterson's defense struggled last year on both fronts, finishing 85th in the country in total defense and 103rd nationally against the pass. Tulsa runs the 3-3-5. Miner fans know all about the 3-3-5 as we hated just about every aspect of it when UTEP used it over the last two seasons. It's a defense that forces the secondary to play lots of man to man and can only be effective if you can generate a pass rush with 3 or 4 players. I get that it's designed to combat spread offenses, I do. But it also inherently creates running alleys that can be exploited. I am not a fan of the 3-3-5, but Tulsa has had some success with it under Patterson.

Opeseyitan was one of Tulsa's best running backs, and on a team desperate to establish the running game, TU couldn't afford to lose anybody. The running back was kicked off the team after being arrested and charged with domestic violence.

Johnson led all FBS players last season in all purpose yardage with 224 yards per game. A 4th Team Pre-Season All-America by Phil Steele, Johnson is TU's home run hitter and most dangerous weapon. Tulsa will have to show improvement up front on the offensive line. Last season, Tulsa gave up more sacks than all but two other FBS football squads and finished last in the C-USA in sacks allowed.

As the numbers point out, Tulsa was able to move the ball and score points. The Hurricane's were in the top half of the league in every major statistical category and still managed to finish 6th in the league in rushing offense despite having Kinne lead the team on the ground.

The Hurricane need a big year out of fullback Charles Clay. Clay, a solid short yardage back will be leaned on early and often. He's also exceptional catching passes out of the backfield. At TU's spring game, he had four receptions for 67 yards and a touchdown.

Destin, who signed an unrestricted free agent contract with the Buffalo Bills, finished third in the C-USA last year in interceptions. Lockett was a hard nosed free safety. He actually led Tulsa last year in tackles for loss and finished second on the squad in sacks as a free safety. The nations 103rd best pass defense will miss Destin and Lockett. 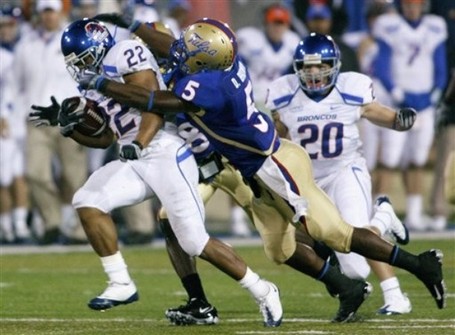 DeAundre Brown (pictured) was Tulsa's leading tacker in 2009 and finished 9th overall in the league. He plays the hybrid linebacker/safety role in the 3-3-5 and had over 100 tackles in '09. It's never good when a safety leads the team in tackles, but in the 3-3-5, it's standard fare (remember Da'Mon Cromartie-Smith?). Without harping against the 3-3-5 too much more, I will simply point out that Tulsa had a defensive back lead the team in tackles, tackles for loss, and one of them finished second in sacks. As a Miner fan, I urge you to keep running it. It works! Really!

As the Tulsa World's Eric Bailey pointed out, Tulsa could be a better team in 2010 and finish with the same record. In conference, TU opens up at last years league champions place, East Carolina, plays at last year's West Champion Houston, and gets a resurgent SMU in Dallas.In the non-con, TU has to go to Stillwater to take on Oklahoma St. and travel to South Bend to play Notre Dame on Halloween. Southern Miss and East Carolina are tough draws from the East.

Tulsa is breaking in a new offensive coordinator, but should be fine on offense. Kinne is a veteran now and has one of the league's best weapons, Damaris Johnson, to help him move the ball. TU has to have improved offensive line play if they are going to challenge for the C-USA West. Can they win the West? It's about as wide open as any division in college football. Houston, UTEP, SMU, and Tulsa all have legitimate chances to win the division. What will separate those squads is who can make defensive stops when it matters. Last year, Tulsa couldn't quite get over the hump in big games because their defense couldn't make one final play. By their late October bye week, if their defensive backs are leading the team in sacks, tackles, and tackles for loss, then we'll know if the Hurricane have improved enough to really challenge Houston & Co. in the West.

Want more information on TU in 2010? Check out Part 1 of the Tulsa Preview, Hurricane Watch: Talking Tulsa Football with Eric Bailey from the Tulsa World.

Bombs Away: A Preview of the 2010 Houston Cougars Football Team

Sam's Town: A Preview of the 2010 Rice Owls Football Team