He Told You So: UTEP's Tim Floyd Cleared By NCAA For Alleged USC Misconduct

Share All sharing options for: He Told You So: UTEP's Tim Floyd Cleared By NCAA For Alleged USC Misconduct

Tim Floyd is a good coach, but a bad guy. He might even be one of the biggest cheaters in college basketball, and if you know anything about college basketball, you know that's saying something. Floyd has been accused of handing $1,000 to O.J. Mayo's advisor, a known scumbag named Rodney Guillory, when Mayo was the best player on Floyd's team at Southern California in 2007-08.

When I say the NCAA brought the hammer down on USC, I mean it.  USC's football squad can't play in bowl games for two years and may lose a national championship.   But, at least as far as Floyd goes, the Committee on Infractions found no wrongdoing.

According to Fox Sports Jeff Goodman:

NCAA Division 1 Committee of Infractions chairman Paul Dee said that Floyd "was not found to have violated."

Dee also said that the committee looked into the allegations that Floyd gave $1,000 to Rodney Guillory.

``The committee did not make a finding on that issue," Dee said.

So, what actually happened back in 2005?

Imagine this, you are the the head basketball coach at a major university.  It's November, you are about to kick off your first season on the job.  Out of the blue, completely unsolicited, a man comes to your office, introduces himself, and asks "Would you like to have the number one player in the country O.J. Mayo?"

That's exactly how it all started (see page 51 of the report for all the fact findings).

Floyd, after the strange meeting, immediately went to the compliance office at USC and told them what had happened.   No, he didn't blow off Guillory in the meeting.  Would you have?  Guillory didn't ask for money.  All he did was offer to help put Floyd in touch with Mayo.   So, Floyd took down Guillory's contact information and directed his assistant basketball coach, unnamed, keep in touch with him.

Floyd was aware that Guilory wasn't a family member of Mayo's.  He knew they were friends who met at a basketball tournament who described his occupation as an "event promoter."   Floyd, skeptical of Guillory, asked him several times if he was an agent or if he worked for any professional sports marketing agencies.  Guillory repeatedly told Floyd that he wasn't an agent.

Floyd's assistant coach kept in touch with him, and eventually, Mayo agreed to come to USC.  He was never given a dollar, a meal, a flight, a limo ride, or anything else with Floyd's or USC's money in violation of NCAA rules. Not a dollar.  By the way, it's not a violation for Floyd to talk to Guillory in general.   So, why were there punishments levied at all?

Well, just because Floyd and USC didn't give Mayo money, doesn't mean he didn't get some from Guillory.   The NCAA found that Guillory gave Mayo the following 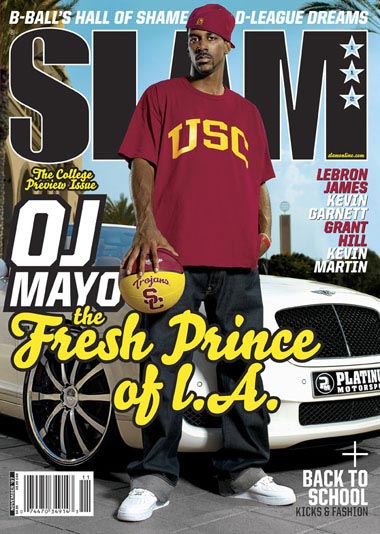 The key to all those gifts?  Guillory paid for it! Not Floyd.  No $1,000 in cash paid to Guillory.  Nothing like that.  So, why was USC basketball punished at all?  They didn't keep a close enough eye on the Guillory and Mayo relationship.

The NCAA determined that at that initial meeting in November of 2005, when Guillory first approached Floyd, that he instantly became a "booster" under the NCAA definition.  Guillory never attended USC. He played basketball at a high school in Compton, but he never attended USC.  Even so, the compliance office should have determined that he was in fact a "booster," because he was aiding in USC's recruitment of Mayo.  Booster's aren't allowed to talk to recruits, obviously, so the compliance office should have told Floyd not to communicate through Guillory to Mayo.  That never happened.  And, that's why USC basketball was punished.

As a result, the NCAA accepted USC's self imposed violations- which included a one year post-season ban which they enforced this past season.  Others, include:

It's not like Floyd had first hand knowledge that Guillory was giving Mayo money.  It's not like Mayo was about to win the Heisman, and all of a sudden his parents lived in a $300,000 house, and he was driving around in a custom Impala with $3,000 rims.  Reggie Bush did that.  It's hard to believe that Pete Carroll didn't know his star player was getting gifts because they were ridiculously visible.  Bush didn't come from money, yet his parents were at the Hawaii game?  No questions were asked.  Bush's running backs coach (who was sanctioned) received phone calls from agents about the money Bush owed them.  So, there was clear knowledge in the USC football coaching office's that things were off with Bush.  It wasn't like that with Mayo and Floyd.

Unless Floyd personally played XBox on Mayo's $1,400 TV, saw Mayo's girlfriends bank statements, or bumped into Mayo at the Bellagio, he had no idea as to the extent of the gifts given to him by Guillory.

So, in the end, Floyd never gave Mayo money, or anything else.  It would have been hard for him to identify gifts he did receive too.  Consequently, USC basketball's punishments are really no big deal.  Their sentence was basically "time served."

I was hoping that some of the national journalists that bashed UTEP for firing Floyd would retract what they said and admit they were wrong.