Ninety Four Days until the Miners take on Arkansas-Pine Bluff to open the 2010 football season.  In the coming days, the Rush will roll out football previews of each of the 12 C-USA Teams.  It's very exciting- The Rush is working to secure comments from my favorite C-USA area beat writers and bloggers for each preview.  This time:  the Miner nation is losing one of our brightest stars; Derrick Caracter is drawing rave reviews after the NBA Pre-Draft Camp; Hassan Whiteside's not making a great impression; and Michael Jordan's presence in the C-USA has doubled.

A Very Tough Loss:  Miss Texas USA is no longer a UTEP Miner volleyball star.  Mere days after the conclusion of Kelsey Moore week at the Rush, the now former volleyball star decided to transfer out of the program.   Best of luck to Kelsey wherever she ends up. 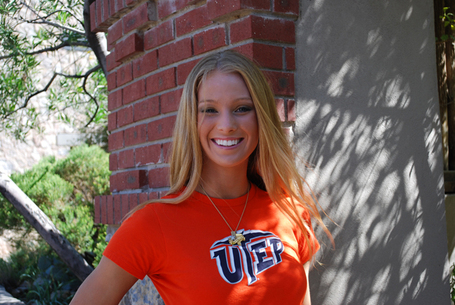 The AD.:  Bob Stull has a new feature up in El Paso, Inc. focusing on El Paso's selection to be the host city for the 2011 C-USA Basketball Championships.

Now we have nine months to prepare. The tournament should have a $4- to $5-million economic impact for the community and is a great opportunity to show conference members real El Paso hospitality. This is also the first opportunity to witness a conference basketball tournament in El Paso since 1990.

Mark Your Calendar:  ESPN is reporting that the NCAA Committee on Infractions will release their findings related to allegations made against USC on Friday.   We'll know then if the NCAA has decided to place any recruiting restrictions on Tim Floyd.

Fantasy Football:  If you're into college fantasy football, you should know that Donald Buckram might be worthy of the #1 overall pick in your draft (Athlon Sports).

Kris Adams, Sr. UTEP The decline suffered by the 6-3, 195-pound senior a year ago was consistent with that of the entire passing game and QB Trevor Vittatoe. And like his battery mate, he’s looking to recapture the form he had two years. In 2008, he caught 14 touchdown passes, but slipped to just 42 catches for 580 yards and two scores. A rangy acrobat, who’ll go high up to snatch balls out of the air, he has the long stride to get behind the secondary. 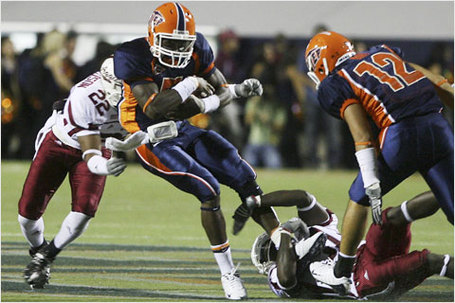 Improving a Perception:  Derrick Caracter has been working hard to put his checkered past behind him.  Amazing, this guy was never arrested.  Just goes to show, the "lazy" label is harder to shed than committing a series of crimes.

ESPN's Chad Ford saw DC at the NBA Pre-Draft Camp and said that he looked great.  DC has lost 30 pounds!

Since, Caracter has been working out at the IMG Academy in Florida where he reportedly shed 30 pounds. In Chicago, he impressed ESPN.com’s Chad Ford, who wrote, "He was the best I’ve ever seen him and certainly helped his draft stock in the process."

Caracter's been busy.  He's had scheduled workouts with the Washington Wizards, Indiana Pacers, and Boston Celtics.  He is still set to work out for the Charlotte Bobcats next week.

Air:  Jeff Jordan, Michael Jordan's other son, is set to join his brother Marcus on the UCF basketball team.  He's transferring from Illinois.

You Never Get a Second Chance to Make a Good First Impression:  Doug Smock at the Charleston Gazette discussed the growing perception that Hassan Whiteside might be a tad immature and overly confident in his skills.

He didn't do well on the athletic tests to which ESPN.com gained access. His no-step vertical jump of 271/2 inches and max vertical of 31 didn't wow anybody. And apparently, he has lost a bit of the humility he had early in the season at Marshall, and that may toss him lower in the first round - or even out. Interviews are a large portion of the Chicago event. Ford writes that a number of general managers told him that Whiteside's interviews were "rocky." And Ford wasn't surprised after talking to the big guy.

Texas Tech vs. SMU (Sunday) SMU is underrated and June Jones has his team headed in the right direction after an 8-5 season. Colleague Graham Watson ranks the Mustangs as the No. 4 team from the non-AQ conferences. With a new coach in Lubbock, there's no way to be 100 percent sure what to expect until the Red Raiders take the field, and they'll do it on ESPN a day after everyone else, so they have a great chance to impress or embarrass with a lopsided result.

An Upgrade:  John Sittler of the Tulsa World thinks the C-USA might have the best collection of quarterbacks in the country.  Along the way, Case Keenum kind of tossed former offensive coordinator Dana Holgorsen under the bus.

Based on an interview with The Sporting News, Keenum obviously thinks he'll manage just fine without Holgorsen. "I'd say it's an upgrade," Keenum said of the changes made by new O-coordinator Jason Phillips, who was promoted from wide receivers' coach. "You could say the Houston offense upgraded.