The Dig: Can't Wait for the Weekend Edition

Share All sharing options for: The Dig: Can't Wait for the Weekend Edition

Is Tim Floyd chasing  a former Tennessee Volunteer?  Also, UTEP loses Arnett Moultrie, SMU and Houston both lost their best point guards, UAB loses a huge transfer prospect.  There's a lot of drama in Alabama right now between UAB & the Crimson Tide.  UTEP fans don't care much for the Texas Longhorns.  UAB fans, on the other hand, have to hate Alabama.  And, for good reason.  In The Dig.

This One Hurts:  UTEP fans have watched Arnett Moultrie with great interest over his 70 game career.  He's an incredible athlete but we never had, or will have, the chance to see if he can turn use that athleticism to become an all around player.  Tim Floyd could have helped Arnett become a better defender.  More on his decision coming later today.

Miners coach Tim Floyd says he and Moultrie "have arrived at a mutual understanding where it would be best for him to continue his career elsewhere." In a statement issued Thursday, Floyd says he wishes Moultrie well and thanked him "for his contributions over the last two seasons."

In The Hunt:  Emmanuel Negedu was a hoops star for the Tennessee Volunteers before a heart condition forced him to leave the team.  He was on the brink of transferring to Indiana, but school administrators wouldn't clear him to play (the medical staff did).  Now, Tim Floyd & UTEP are right in the mix.

The report also mentioned that New Mexico, UTEP, Nebraska, UNLV, Arizona and Memphis are showing interest in Negedu and that despite the news from IU, the 6-7 forward still hopes to play next season. 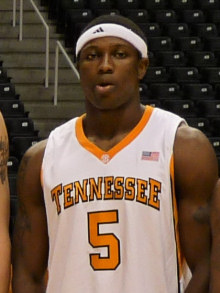 Umm.  Okay:  CBS Sport's Gary Parrish has a message for fans of mid majors who lose coaches to schools from BCS conferences:  Get Over It.

Fans are loyal to schools but not coaches, schools are loyal to nobody, and coaches are only loyal when they're naive. So what I would love is for fans -- Creighton fans, UTEP fans, all college fans -- to acknowledge this up front, stop taking it all so personally and realize that people like Dana Altman don't leave schools like Creighton because they hate schools like Creighton, and they certainly don't do it because they're a--holes.

In Good Company:  Cornelius Brown has been reunited with a former high school teammate in Chicago.

5 To Remember:   The Prospector is counting down the 5 most memorable moments of UTEP's athletic season.  Blessing Okagbare, Stacie Townsend, and Randy Culpepper make the cut.

Sweet Home Alabama:  Justin Knox is a post player for the Alabama Crimson Tide.  He's never quite found his niche at Alabama, but is a dedicated student and graduated in three seasons.  Now, as a senior, he wants to transfer to UAB and begin a masters program.  He has one year of eligibility that he would like to use in a Blazer uniform.  Alabama and UAB are in different conferences and don't play each other next season.  Despite that, the Crimson Tide have made an unusual move, banning Knox from transferring to any UA system schools.  So, UAB is out of the question.  Ordinarily, a school won't allow a transfer to go to a school in the same league or to a team on their schedule.  Alabama likes making life difficult for UAB.

Why would Alabama object to Knox going to UAB? UAB is not in the SEC and is not on Alabama’s schedule. The schools have played just once, when UAB beat Alabama in Tuscaloosa in the 1993 NIT.

Alabama says they are blocking the transfer because of "tampering" on behalf of UAB.

"In our family, since the time I was knee-high, it's been about Alabama," Darien Knox told the Tuscaloosa News. "Justin came in, played hard, got a good education, never embarrassed the program, stayed out of trouble and will graduate in three years. And this is how they do him? Members of our family have worked at Alabama, do work at Alabama. We've washed dishes in the cafeteria. Our family loves Alabama, and for them to do this to Justin, they're doing it to us. It's hurtful."

Pettiness.  Remember when UAB was about to hire former LSU offensive coordinator, and current Florida State head coach Jimbo Fisher?  The Alabama System wouldn't dare let the Blazers become stronger than the Tide at football.  So, they made the hire impossible.  UTEP fans may not care for Texas.  But, at least the Horns don't get in the way of UTEP's coaching decisions.  At least they don't bar their student athletes from going to system schools.

Anywhere But Here:  SMU's Matt Doherty hasn't had a ton of success in Dallas.  He did have a promising young guard named Paul McCoy.  Key word being "did."

SMU sophomore guard Paul McCoy has asked to be released from his basketball scholarship and is transferring, the school confirmed today. The move is a blow to the Mustangs, who will have major questions in the back court. Coach Matt Doherty had pointed to McCoy as a reason why SMU could expect to be improved next season, Doherty's fifth at SMU.

Wade started 31 of 35 games at point guard this past season, helping the Cougars reach the NCAAs for the first time since 1992. The 5-foot-8 Wade averaged 5.7 points and 4.8 assists per game as a sophomore, becoming the third player in school history to accumulate more than 100 assists his first two seasons. Though his departure comes barely a month after James Dickey replaced Tom Penders as the UH head coach, Jeffrey Wade said the decision has been some time in the making. Wade doesn't have an arrangement with any school at this point.

Mystery Guest:  Houston is still searching for someone to emerge as a star alongside Case Keenum.

2. Looking for a breakout player: Houston is looking for players both on offense and defense to have a breakout 2010 season to complement the play of Keenum. On the offensive line, guard Isaiah Thompson is poised to have a big year, while Brown and Tonga could turn the defensive line into something it hasn’t been in quite some time.

Hey Porter:  New Memphis head coach Larry Porter is something of a rock star around town.  He's been hard at work trying to get Memphis football back on track.

While the function, attended by roughly 400, was meant to celebrate the accomplishments of all the athletic program's coaches and to discuss a fundraising goal of $7.2 million, Porter, who turned 38 Wednesday, was clearly a focal point. He's taking over a program that struggled to a 2-10 finish in 2009 and remains in search of an elusive Conference USA title 14 years after the league was formed.

The New Kid: UTEP had interest in the Tiger's newest signee Charles Carmouche.  Here's Josh Pastner on his newest player.

Alliance:  The C-USA has aligned with the Big 12 and some other leagues to form a regional officiating consortium.  C-USA refs won't have to travel as far, it's an efficiency thing.

"Regional officiating models are becoming more and more efficient and we are pleased to get someone with as much experience and credibility as Curtis to head this new officiating program," said C-USA commissioner Britton Banowsky.