Mariachi Los Mineros brings in Cinco de Mayo. UAB loses Millsap, Stull Keeps Writing, Donnie Jones has some 'splaining to do, and the Miners reportedly lose a recruit to Duquesne. In The Dig.

Called Out: Veteran El Paso sports journalist Ray Sanchez made a cameo in the latest El Paso, Inc. and took a few swings at the state of UTEP football. It's hard to disagree with him. For the last few years, spring has brought immense optimism and UTEP has "petered' off at the end of some tough seasons. Ray doesn't pull any punches here.

"I know, too many UTEP dreams have turned into nightmares. Remember when the Miners were going to start out big by beating Buffalo last year? Yeah, the Miners lost. It’s been so bad the last few years that some El Pasoans think winning four or five games is ‘a golden year.’ My God, have we become so used to mediocrity that we think like that? 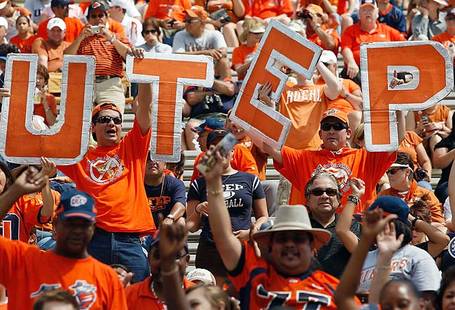 State of Economy: Carlos Silva at Miner Illustrated wasn't happy that UTEP students voted overwhelmingly against the Athletic Enhancement Initiative. The money would have been great, I agree, but in this current economic climate I can't fault students for wanting to minimize student loan debt. Especially since UTEP has nearly doubled tuition and fees since 2003, when the state chose to deregulate tuition increases. I'm not currently a UTEP student, so as someone who's not paying for the new fee, I can't in good conscience criticize students who thought it was excessive. And, $360 is a lot of money. If you want my full take, it's right here.

Yes, I’m going to stand on my soapbox and preach that the student population at UTEP has no pride in its sports. With the overwhelming decision to disapprove the fee to improve athletics, you’re saying just that. As a college student I’d be lying if I said that I’m for adding another fee to my tuition, but when it means that I have a small hand in improving the team I live and die for, I’ll do it in a heartbeat.

UTEP’s Anderson Mutegi has been named the Conference USA Track and Field Male Athlete of the Week the league announced Tuesday. Mutegi claimed two titles at the Don Kirby Invitational in Albuquerque, N.M., on Saturday. He broke a 22-year old stadium record by clocking the nation’s sixth-best time of 45.32 in the 400m. That time was also a personal-best for Mutegi and ranks fourth all-time in the UTEP record books. The junior from Meru, Kenya picked up his second crown in the 200m with a time of 20.91. 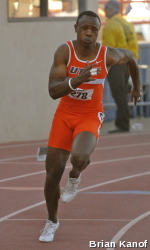 Stull on Floyd: El Paso, Inc. used to be trash when I lived in EP. Now, they are doing a great job of covering Miner athletics. And, they feature original commentary by Bob Stull that you just can't get anywhere else. Read this for his take on the job Tim Floyd has done so far.

Lost: Nobody knew Tim Floyd was recruiting Alabama high school star Derrick Martin. Even so, maybe it's better we didn't get our hopes up since he signed with Duquesne.

Martin attended George Washington Carver High School in Montgomery, Ala. before moving on to Flora MacDonald Academy. He was also being actively recruited by UTEP and UAB.

The League's Best: Rivals.com has some 2010 statistical projections for football. Donald Buckram and Case Keenum lead the way.

This league had nine 1,000-yard rushers last season, the most of any conference. But five of those guys were seniors, and two juniors turned pro early (and neither was drafted). That leaves UTEP's Donald Buckram, who should get to 1,000 again, and UCF's Brynn Harvey, who suffered a knee injury during spring ball and isn't expected to be 100 percent until after the season starts. C-USA had two 3,000-yard passers last season, and that number should more than double this season.

SMU Inroads: Gerry Hamilton has a comprehensive list of the best linebacker prospects in Texas. SMU and June Jones went after some studs. They only landed one, Jonathon Yenga, but June Jones is absolutely recruiting in a Tim Floyd like manner right now. He's offering the best players in the state and if he gets one or two, expect the Mustangs to be a force as long as he's there.

Who's Your Agent? Get this, Donnie Jones left Marshall for conference rival UCF to become their new basketball coach. He had a $500,00 buyout clause at Marshall but he's only been able to pay half of it. Now, the payment deadline has passed. How did Jones not make sure that UCF would pay this for him? Not a good situation.

According to MU athletic director Mike Hamrick, a $500,000 check was owed to the university within 30 days of the coach's departure to UCF, but only $250,000 was received on the deadline, which was last Thursday.

Not Everyone's Pleased: I found a funny Houston blog, Scott & Holman, and they're not too pleased with Dickey's first two pickups.

The Houston Cougar men’s basketball program has recently announced its first two signees of the James Dickey era, a pair of forwards. First it was Midland JC transfer Jonathon Simmons, followed quickly by Mikhail McLean of Second Baptist High. Let’s see, a JuCo player, and a 6’7″ forward who only grabbed 4.4 rebounds per game in high school. Yeah, those don’t sound like the types of players Tom Penders was recruiting at all. But hey, at least they’re from the Houston area!

Gone in 60 Seconds: Elijah Millsap is officially staying in the NBA Draft. Mike Davis can't get UAB in to the tournament or beat Memphis. Now, he can't keep his best player in town. Yikes.

A Force to Be Reckoned With: UCF defensive end Bruce Miller was named to the Lombardi Watch List.

Miller, who has most career sacks among returning players nationwide with 26, was named to the Lombardi watch list Monday. The award goes to the nation’s top down lineman — on the offensive or defensive side of the ball — and linebackers who line up no more than five yards away from the line of scrimmage.

The Tulsa World does a good job of giving an overview of the C-USA's football spring news here (Eric Bailey).