The Dig: 98 Days Till Miner Football Kicks Off Edition

Share All sharing options for: The Dig: 98 Days Till Miner Football Kicks Off Edition

The Dig returns- moving during bar review is hard!  Anyway, this time:  The C-USA is making it the smart economic move for it's basketball teams to schedule weak non-con teams, Derrick Caracter making headlines, and some good football notes from around the C-USA landscape.  In The Dig.

A Valid Concern:  Tuto's Pablo Villa is paying attention to the newest football program in Texas.  UT-San Antonio isn't D-1 yet, but their hire of Larry Coker, financial commitment, and willingness to schedule BCS foes early on will put them on the map soon. There's a lot of high school talent in San Antonio and the city has produced some Miner greats (Remember Rocky Perez?).   One thing that might hurt the Roadrunners?  Conference realignment will occur before they are D-1 ready.  That will impede their ability to jump into an established league by tossing around the size of their media market.

Many have chided me before for saying UTEP should be very concerned about the potential hit on its San Antonio/Central Texas pipeline if UT San Antonio’s newly minted football team experiences success. Maybe, maybe not. But one thing is clear, the Roadrunners are making a big push to join the upper echelon of college football.

DC Making Headlines:  The Derrick Caracter story has made for some good media fodder.  Many Miner fans may not like the way he left the program, but the program needs DC to make an NBA roster.  It's been far too long since we've had a Miner playing in an 82 game season or even just heard a Miner name called on Draft Day.  Recruiting will only get easier for Tim Floyd if he can toss around some newer examples of Miners making it to the league.  Here's a story from the New York Daily News on DC.

He got into shape at IMG Academy in Florida, lost 30 pounds and was considered enough of a prospect to be invited to the NBA's annual pre-draft camp, which was held here last week. Most experts see him as a late second-round pick

Good Answer:  The Louisville Courier-Journal asked DC if he had any regrets about his time in Louisville.

"I would have done it the same," Caracter said at last week's NBA draft combine. "I had a great two years at Louisville. I enjoyed the friendships I made there. I loved the city. I even enjoyed Coach P. I know he was tough on me, but when I left I understood." 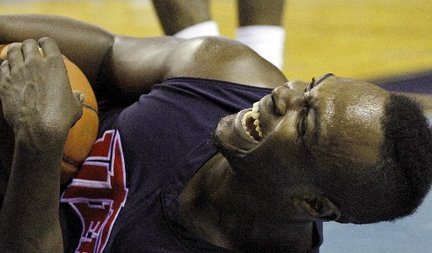 Finally, the Question was Asked:  ESPN's Andy Katz asked Caracter why he didn't return to El Paso with his teammates after UTEP's first round loss to Butler.

Derrick Caracter said the reason he didn't come home from San Jose to UTEP post NCAA was he had to get his head straight and focus on draft.

You Made Our Point:  Dan Wolken says Memphis isn't arrogant and doesn't understand why many who opposed their tournament bid said they were.  Then he trashed the C-USA and listed Memphis' many accomplishments.  No arrogance there.

What in the world is this "arrogance" theme that we've read about now in both El Paso and now West Virginia papers? Yes, Memphis is trying to get out of C-USA and into a BCS league. But so are Central Florida and East Carolina. Are they arrogant? Look, Memphis has been running a top-10 basketball program in a league that has performed more like the MAC than MWC in recent years. Memphis won 64 straight games in C-USA, went to three straight Elite Eights and played for a national championship.

One of the Best:  Sports Illustrated's Andy Glockner is taking a look at the best Non-BCS basketball players in the country.  Randy Culpepper makes the list.

Randy Culpepper, UTEP: Culpepper averaged 17.9 points last season, and that was with Caracter getting his share of touches. Now that the big man has departed, expect the explosive 6-foot guard to up those numbers. He made nine threes in two separate games last season, exploding for 45 points against East Carolina.

Peso's?  Really? The Herald Dispatch's Chuck Landon isn't too happy about El Paso getting the C-USA tourney either.  So, he constantly refers to El Paso's bid in Mexican currency.   Landon thinks that the choice will make it hard for Marshall fans to go to the league tournament.  Chuck, I have to ask:  How many went to Memphis?

Don't Sweat it:  Coach Mike Price talked with the Orlando Sentinel about the Houston game.  Price knows Houston's success was good for the league, but he'll have to live with the win.

"Oh man, I felt so bad about that game," UTEP coach Mike Price said. "It was a big, big win for us and we really, really needed it, but I know we hurt Houston and the league. We do need someone to make a big run like that and make it to a BCS game, but it's just so difficult because of the schedules we play. We all play a lot of BCS teams and then we just beat up on each other in conference.

A Simple Plan:  The C-USA has adopted a new plan to improve the conference's RPI in basketball.  The plan is to distribute postseason revenue based on winning percentage.  This is incredibly important.  The C-USA is giving a financial incentive to the league's weakest squads to avoid money games that they have no realistic shot of winning.  Rice, ECU, UCF, and Tulane were atrocious last year.  The league was deeper than past years, with 5 solid clubs, but the drop off was steep and painful.  Why?  The RPI's of the weak teams are so bad that they drag down the RPI's of the league's bubble teams.  If Memphis or UAB had a slightly higher RPI last year, it might have been the difference in getting them in.  Conversely, if UTEP's hadn't been blistered by the weakest league foes, the Miners wouldn't have been forced to play as a 13 seed.

The thinking behind the move is that winning against terrible teams is better than losing to name programs.  It's worth a shot.

The Memphis Commercial Appeal's Dan Wolken has some nice numbers on why it's necessary.

With poor performances in the non-conference season, teams like SMU (208), ECU (231), Tulane (282) and Rice (311) have created a power-ratings drain on the league's top teams, to the point that RPI guru Jerry Palm came to Florida last week and told the coaches that UAB and Memphis would have likely been in the NCAA Tournament if the bottom of the conference wasn't so bad.

ESPN thinks C-USA is the 9th best football conference.  Hard to argue with the ranking.

It might not be the county's deepest conference, but Conference USA's teams might score more points than any other league. With Heisman Trophy hopeful Case Keenum and a high-powered passing attack returning, Houston figures to be the team to beat. Two-time defending C-USA champion East Carolina will have to adjust to life without Skip Holtz, and Southern Mississippi seems ready to take off in coach Larry Fedora's third season. June Jones seems to be ahead of the curve at SMU, too.

"One is, it's OK to change conferences. Unlike other conferences, we are generally comfortable with that concept. ... We have no problem with having the conversation. We have it openly. We do, however, believe while you're on the team, you've got to support the team. And that's something that we talk about."

Right Move:  UCF Athletic Director wants C-USA schools to band together in support of an early signing period for football.

"I believe in it," UCF Athletic Director Keith Tribble said. "It’s something we should support as a conference. I know we do at UCF because when we’re recruiting these student athletes, it’s an expensive proposition. Often times, we find ourselves re-recruiting the same kid until signing day even after there’s a commitment. With the signing day in December, the recruiting process is over. It would be similar to basketball, which seems to work well."

Texas Tech East:  Ruffin McNeill sat down with the Orlando Sentinel to discuss his team's progress.  With ex-Tech assistant Lincoln Reilly running the offense, ECU will be one of the most intriguing C-USA schools come August.

OS: How is the competition for the starting quarterback job going? McNeill: I’m anxious to see how [transfer] Dominique [Davis] works. He is enrolled at school. He brings some experience from Boston College and the junior college ranks. Brad Wornick had a solid spring for us. Then we have some guys that are competing as well. I’m anxious to see what Dominique can bring, but he has to be patient and not try to take the whole world on his shoulders. A lot of expectations from our fans and alums have been placed on his shoulders, but we’ve got to remember that’s a big burden to carry and we all have to be patient. 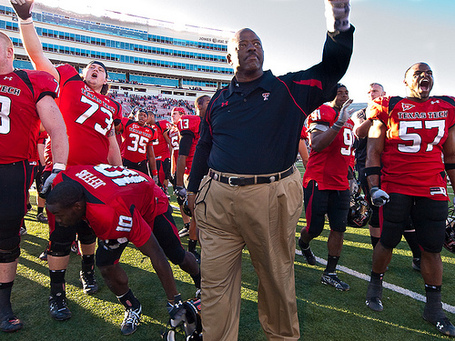 4th Times a Charm:  Rice's Wayne Graham has been named the C-USA baseball Coach of the Year in baseball.

Graham has accomplished some incredible things at Rice. 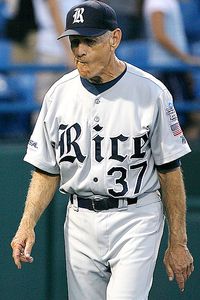 Number 1:  The Tigers have signed their first recruit of the 2011 campaign, running back Artaves Gibson.

Movin' Up:  ESPN's Andy Katz does a great job covering C-USA hoops.  He has a nice article on Donnie Jones, the former Marshall coach who left to C-USA rival UCF.  Jones did not make a lateral move.

"There's a reason Reggie Theus [assistant with Timberwolves], Isiah Thomas [head coach at FIU], Joe Dooley [assistant at Kansas] and Tim Floyd were talked about for this job," Jones said. "There is a commitment to the facilities; you can recruit good players. Memphis proved you can play out of this league for the national title. It can happen."

Despite being a WVU graduate and a former Mountaineer linebacker from 1976-78, Marshall fans have taken an instant liking to their new head coach, even though he has a slew of ties to the Thundering Herd’s fiercest rivals.

June in May:  June Jones had a nice sit down with Fox Sports Southwest.  His bluntness is appreciated- here he's explaining SMU's improvement in his second season as head coach.

Obviously you lose for a reason, and they weren’t very good, pretty much in any area. But the kids have learned a lot: learned how to trust each other, learned what it takes to win. Hopefully, we’ll take that and carry it on into next year and put together three or four winning seasons in a row.

Know Your Enemy:  The Sporting News ranks NMSU as the 100th best team in the country.  They have a summer preview on the Ags up here.

It begins with 18 returning starters and new offensive coordinator Mike Dunbar, who had success at Northwestern, California and Minnesota. His presence will make the offense better—and frankly, it can't be any worse than it was in 2009: last in the nation in scoring and yards. The defense was overwhelmed at midseason last year because the offense couldn't move the ball. If the offense makes strides, the Aggies could surprise.