I get tons and tons of links related to the C-USA. This time of the year, 90% are related to baseball.  Apologies for slow posts, finals are upon me.  Even so, we have news of  several new potential basketball recruits, one  from New Orleans and two from California, a look at conference realignment, and word of a potentially major departure in Birmingham.  In The Dig.

Icon:  The Boston Globe's Joe Sullivan has a review of Rus Bradburd's "Forty Minutes of Hell."  The Nolan Richardson biography sounds fascinating.  I should have time to get to it this summer.

How unfortunate, because there are so many amazing things to know and remember about Richardson, truly a sports hero and pioneer. Rus Bradburd brings back a lot of them in the biography, "Forty Minutes of Hell.’’

A New Recruit?  Charles Carmouche played last season for New Orleans.  According to Dan Wolken, UTEP, Houston, and Memphis are among the C-USA schools recruiting the transfer prospect.  Carmouche sounds like he could be a good one.

A 6-foot-2 native of New Orleans, Carmouche recently visited North Texas. Several Conference USA schools are recruiting him, including UTEP and Houston. Some Big 12 and SEC programs are looking at him as well. 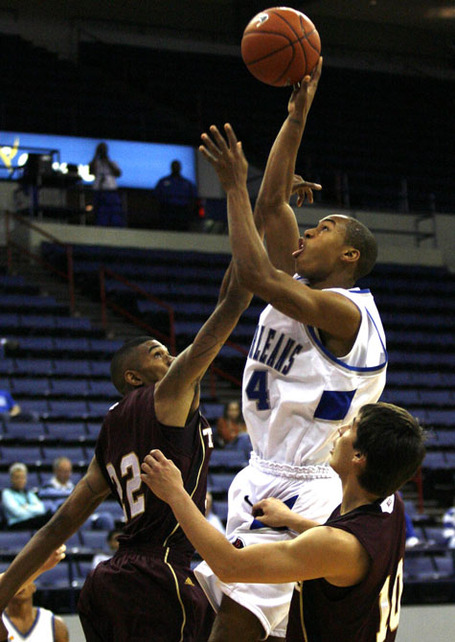 The Elephant in the Room:  UTEP AD Bob Stull had some nice comments in Double B's Sunday feature on conference realignment.

Where?  Speaking of expansion, Middle Tennessee State is jockeying for position should the C-USA need to add a team or two.

California Love The Sacramento Bee is reporting that UTEP's Tim Floyd is interested in recruiting a pair of California stars.

UTEP and new coach Tim Floyd appear to be seriously interested in both Sheldon juniors Darius Nelson and Ramon Eaton, who performed with Los Angeles-based Team Odom at the Pangos Sweet 16 in Long Beach on Saturday and Sunday.

Both Sheldon High juniors are impressed with Floyd.

"Tim Floyd is an awesome coach," Nelson told Rivals.com. "He coached in the NBA for a couple years, and he knows what he's doing."

The State of Play:  Wolken also has some commentary on whether or not Arnett Moultrie is leaving.

Hate to Pile On:  The national media coverage related to Derrick Caracter's decision to leave has been anything but positive.  Slam Magazine just joined the group of media outlets calling DC out.

That being said, he’s projected as a very late second round pick at best this year and could have benefited from another year to grow his game — and prove he has matured mentally — in college. Too late for that — he’s hired an agent.

Bad News for Mike Davis:  It seems like Elijah Millsap may be very close to declaring that he's staying in the NBA Draft.  Some outlets have reported it's a done deal.  Others are cautious until there's official word.  It seems like he's definitely leaning towards the NBA.

According to Jonathan Givony of Draft Express, Millsap has decided to keep his name in the NBA draft and not return for his final college season at UAB. Givony posted on his Twitter page on Thursday night that "Elijah Millsap (Paul’s brother) will not be returning to UAB for his senior season from the information we’ve gathered."

Serious Talent:  Fendi Onobun was one of 7 C-USA players to get drafted last weekend.  Sports Illustrated examines his high school all star basketball team which had 3 NFL players on it.  All Tight Ends.

High Expectations:  Houston doesn't want to play in the Liberty or Armed Services Bowl.  They want to be the first C-USA team to crash the BCS party.

Of course, the Houston Cougars are aiming higher than any of the C-USA affiliations. An 8-1 start and No. 12 ranking last season whetted the Cougars' appetites for getting into the Bowl Championship Series mix. The Cougars faded to 10-4, leaving them with the goal, as quarterback Case Keenum put it, to "be four games better than we were last year."

EP Kids Gone Wrong:  Two former El Paso prep standouts are playing football for the New Mexico St. Aggies.  I like to root for local kids who go on to play at the collegiate level, but in this case, I just can't do it.

Junior Ruben Escarcega and freshman Jake Swenson each is competing for the Aggies under second-year head coach DeWayne Walker. Both players redshirted last fall. Escarcega, a former Del Valle High School standout, is playing at right tackle, while Swenson is a right guard. Each has seen extensive time on the field during spring practice, which ends May 1 for the Aggies.

The Rush is trying to assemble a C-USA and UTEP blog roll (a collection of links) on the left sidebar.  Check it out.  If you know of any good UTEP, C-USA, or other school specific fan sites please post them in the comments.  Also, I want to post links to good local, El Paso area blogs there too.  Let me know if you got one, or if you like to read one every now and again.