Share All sharing options for: Mini Dig: Craving a Double from Chicos Edition

Special thanks to jakeprobst, asalom, and everyone else in the community who has been FanShotting, e-mailing me links, or adding them in the comments.  This site will only be as good as the community that contributes to it and we're off to a hell of a start.  This time:  Sports Illustrated has some comments on Derrick Caracter, more Arnett Moultrie rumors; another paper has doubt as to Houston's ability to get into a BCS league; and more Kelsey Moore.  After all, it is Day 3 of Kelsey Moore Week.  The Dig is your best UTEP and C-USA Round-Up.  In The Dig.

The Race is On:  Former UTEP Miner Arnett Moultrie has instantly become the best available transfer prospect in the country.  Teams love that he's willing to pay his own way for a year and then only cost them a scholarship for one season.  For schools, it's literally no risk for the reward.  A writer for the Arkansas Democrat-Gazette wants Moultrie to become a Hog.

We all know Arkansas is on the recruiting trail hunting for help alongside forward Marshawn Powell in the frontcourt. While it may not be an immediate fix next season, adding Moultrie could prove huge in 2011.

Kappy's Back:  Steve Kaplowitz and I agree that Arnett Moultrie is making a mistake by transferring to another school.  The shelf life for NBA prospects is rarely four years.

The latest Merriam-Webster Dictionary defines a mistake as "to blunder in the choice of." I am suggesting that they add a new entry to the word: "See Arnett Moultrie." To say that Moultrie is making a mistake by transferring from UTEP to another university is an understatement.

Days of Our Lives:  Sports Illustrated thinks that Derrick Caracter's path from high school phenom to El Paso and now to the draft is like a soap opera.  They still think he'll cash some NBA or European paychecks next year.

Derrick Caracter, UTEP: On the radar for years now since going toe-to-toe with Greg Oden in a game at Sonny Vaccaro's ABCD camp, Caracter's career can be described as more of a soap opera than anything at this point. He flashed sparks of potential despite looking largely out of shape in his lone season at UTEP (after transferring from Louisville). He will surely make good money wherever he ends up, be it the NBA, Europe or the Far East.

How Do You Really Feel:  Some report out there says that a Triple A team might be coming to El Paso.  Jim Paul, the guy who sold the Diablos to the St. Louis Cardinals, doesn't buy it.  This quote is gold.

"This is a very speculative story by a couple of computer nerds as far as I'm concerned," Paul said. 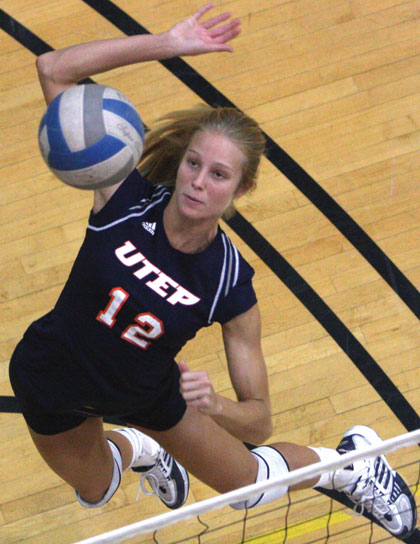 All Over It:  KVIA has a Kelsey  interview here and a more extensive photo gallery of Miss Texas here.  I do have to say KVIA need's to rethink their "No-embedding" stance for their video.  I, and others, would post a lot more of their stuff if it could be embedded.

No Dice:  A Galveston Paper doesn't think Houston has what it takes to get into a BCS conference.  It's hard to dispute the facts they have laid out.

It’s all about the money. And Houston has very little of it compared to most. The Cougars can’t fill their 45,000-seat stadium that is outdated. They can’t lure a big-name basketball coach — or depending on your interpretation, afford to hire him. They don’t have the athletic facilities to attract recruits. They have a dilapidated basketball stadium — if one can call it that — which seats 5,000.

Rhoades expects UH to receive the results from a feasibility study on upgrading or replacing Robertson Stadium and/or Hofheinz Pavilion later this month. The cost of the upgrades could range from $45 million to more than $100 million, depending on how much money UH can raise.

Primetime:  The Coogs will play UCLA on national television.  You have to give H-Town credit for their non-conference scheduling.

A National Power:  Rice might be generally terrible across the board in C-USA play.  But, in baseball they always get it done. Yahoo! has the Owls ranked as the 21st best team in the country.  They seem to be finally getting things together.

The Owls had a fantastic week that included midweek wins over Texas State and Texas Southern before taking two of three on the road from Marshall.