The Dig: Congratulations to the UTEP Class of 2010 Edition

Share All sharing options for: The Dig: Congratulations to the UTEP Class of 2010 Edition

UTEP's Spring Commencement Ceremonies are scheduled for Saturday.  The Rush wants to congratulate the Miner Class of 2010.  This Time:  It's Day 2 of Kelsey Moore Week; J Will is off to China, Caracter Get's A Tryout, and some awesomely embarrassing news for the Houston Cougars.  The Dig is your best UTEP and C-USA Round-Up..  In The Dig.

The Ambassador:  Miner forward Jeremy Williams has been selected to represent the U.S. in the "Reach USA" program.  He's going to travel to China with some of the nation's best ball players.  Two weeks in China playing basketball with star players from across the country?  What an amazing opportunity.

UTEP forward Jeremy Williams is one of 11 NCAA Division I players who will tour China as part of the "Reach USA" team from May 14-31.

Luck of the Irish:  A Rivals affiliate, Irish Illustrated, thinks C-USA might have the deepest cast of quarterbacks in the country.  Case Keenum is the headliner but there is some definite depth in the C-USA.

UTEP: The Miners have the talent to make a bowl game, especially with quarterback Trevor Vittatoe and running back Donald Buckram back, but the consistency is something that needs to come along. The Miners have a new defensive coordinator, which should alleviate the need to get into shootouts with opponents.

Welcome to the Family:  Gloria Brown is the newest UTEP woman's basketball player.  She started out at N.C. State and was ranked the #3 junior college prospect in the country.

Mailing It In:  Joe Muench has a blockbuster of a blog post up. He manages to contradict himself, slam Julyan Stone, Jeremy Williams, and Randy Culpepper, and then crap on Tim Floyd's recruiting class all without making an actual effort to back up his analysis.  Using the word "analysis" is being very generous.   The effort is lacking, but the gold is in the comments.

The two players who were the main reason for UTEP's 26-7 record, and NCAA appearance, will not return.

Now no Moultrie, who some say (me, too) didn't have a good sophomore year, is to transfer.

Tuto's Back:  Maybe I shouldn't pile on Joe.  Jay Koester has a point, those angry posters in the comments might target Turn Up the Orange or worse, the Rush, next.

Basically, I was waiting for some flash of insight, but it still hasn't come. (And maybe I was also a little afraid that Joe on Utepia's commenters would come after me next.)

A Longshot, But a Worthy One:  Tim Floyd has reportedly offered Kevin Noreen a scholarship.  Noreen is a 4.0 student that can really score.

We Need More Like Him:  Craig Evans, a.k.a. Kyyote, is a very dedicated Miner fan.  He does whatever he can  to help the team and now he's trying to raise money for the program.  His annual fundraising effort just kicked off.  Best of luck, Kyyote.

You Tell 'Em Nolan:  Nolan Richardson was recently asked if woman's basketball coaches can switch over and coach men.  He remembers one coach who was able to get it done.

"I've give you an example: I played for Don Haskins at UTEP and he was a girls basketball coach when he came to our school. He coached the boys and the girls. And he won a national championship [at UTEP] within three years. "I'm old school. I believe that if a person understands the game and is willing to exercise the energy to coach, then the chances of being good at what you do, which is teach basketball, are very good. 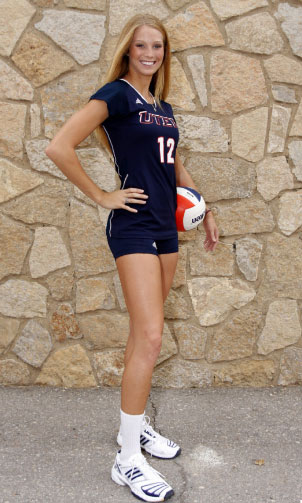 MySpace Still Exists?  Apparently it does, and UTEP volleyball has a page.

No Controversy Here:  You may have heard about the Miss USA pageant controversy over their official photos that some think are inappropriate.  Really, I think these media outlets create the controversy so they can show the pictures with a straight face.  I won't display 'em here.  But, if you want to see an assortment of Kelsey images become her fan on Facebook and check 'em out.

Busy Lady:  Kelsey somehow found the time to sit down with USA Volleyball for an interview.

Wait, What?  They give odds on Miss USA pageants?  Kelsey Moore has 16:1 odds according to Bodog.

Big Congratulations:  I never knew that former New England Patriot Troy Brown went to Marshall.  Not only that, but he just got elected into the College Football Hall of Fame.  Congrats, Herd nation.

A dual threat on the playing field, Brown’s elusive nature as a receiver and kick returner led the Thundering Herd to back-to-back trips to the Division I-AA (now FCS) National Championship game, garnering the NCAA title in 1992. He caught 139 receptions for 2,746 yards and 24 touchdowns in his career en route to earning First Team All-America honors his senior year. Additionally, he boasted 1,825 return yards and four touchdowns on special teams.

Bad Call:  Marshall RB Darius Marshall failed a drug test at the NFL Combine.  Not only that, but he was one of seven underclassmen who declared and weren't drafted.  Maybe, he should have stayed in school.

The Cubs:  Andy Katz has his first post draft-declaration top 25.  The Tigers check in at #19.

But if the heralded recruiting class is as good as advertised, then Pastner should have a good time molding this crew into a solid national contender and the top team in C-USA. He certainly has the talent, led by Will Barton and hometown product Joe Jackson. Should be fun to see how it develops.

The Cougars have just six regular season conference games remaining this season. And unless some kind of miracle happens, the only way they're going to get to the conference tournament is to start buying some tickets so they can sit in the seats of their home field and watch the other teams play.

Sleeping Giant My A%^:  The Chronicle's Steve Campbell knows that many people out there see Houston as a sleeping giant in the conference expansion or realignment scenarios.  He isn't so sure that Houston qualifies.

The Odd Man Out:   Mack Rhoade's doesn't want to see Houston get left behind.  However, he has a lot of work to do if he wants to get the attention of a BCS Conference.

Three Times a Charm:  James Dickey's newest basketball signee, Fabyon Harris, had previously committed to Northern Colorado.  Then, he committed to SMU.  He's a man of his word.  Here are some Fabyon highlights.

The UN:  Rice already has the nation's first Iranian born player, Arsalan Kazemi,  now the Owls have signed a 7'1 center from Egypt named Omar Oraby.  A seven footer from Egypt?  Rice is scouring the planet for talent.

Oraby, a 7-1, 250-pound, native of Cairo, Egypt, was one of the leading rebounders and shot blockers at FIBA's 2009 U19 World Championships played in New Zealand. Playing for the Egyptian National Team, he ranked fourth at the championship in rebounding, averaging 8.4 rebounds per game and was ninth in blocks, averaging 1.4 per contest.

ACC?  The Orlando Sentinel thinks that UCF might be in position to jump into the ACC should the league lose a team or two.

ESPN has a spring preview of the NMSU Aggies.

The running game was one of the few bright spots for the Aggies last year and should be again with starter Seth Smith fully healthy. Smith played most of last season with a separated left shoulder and he injured his right one during spring drills, but he's expected to recover for the fall. He will have some capable backups in Robert Clay and junior college transfer Kenny Turner, who was an All-American. Running back is by far the deepest position for the Aggies and will be counted on to produce early while the quarterbacks and receivers get on the same page.

Choke City:  NMSU was at one point in firm control of the WAC baseball chase.  Now, the Aggies are letting it all slip away.